CAEPLA talks to Thomas Pyle, president of the Institute for Energy Research, about how TransCanada can finally get the green light for Keystone XL.

CAEPLA: How did things get so badly off track for TransCanada in Nebraska in the first place? What could the company have done differently to have avoided being blocked the last several years?

Thomas Pyle: For years the keep-it-in-the-ground campaign focused on shutting down energy production but with the shale revolution, they shifted tactics to targeting pipelines. TransCanada was the first major pipeline company to get caught in those crosshairs. What we've learned from the Keystone XL saga is that pipeline companies and advocates for affordable energy have to treat these projects like advocacy campaigns the same way that the keep-it-in-the-ground crowd does. They have to improve their outreach and communications with the people in these communities.

CAEPLA: What does TransCanada need to do now to get the green light in Nebraska? What should they do differently going forward?

TP: They need to get through the permitting process in Nebraska. They have to continue to make their case to the Nebraska PSC and show that the pipeline is environmentally safe, which it is, and economically beneficial for the state and the country, which it is. The keep-it-in-the-ground campaign is a well-funded network that specializes in spreading disinformation to further their political cause. TransCanada, and really any company who faces this type of opposition, has to be prepared to fight back against misleading rhetoric.

CAEPLA: How can TransCanada win over the dozens of remaining hold out landowners? How important is respecting property rights this time?

TP: They're going to have to communicate with landowners and, of course, compensate them. Respecting property rights is paramount. They've tried to respect the concerns of landowners throughout the process and I'm sure they'll continue to do so, but they have to do a better job at communicating their position.

CAEPLA: Can TransCanada reboot? Can they start over with directly affected landowners and their neighbours?

TP: They don't need to reboot. They just need to continue working through the process. This project is almost to the finish line. As I said, TransCanada was caught off guard by the opposition because we've never seen such opposition to what should be a routine infrastructure project. But this is America where everyone gets at least a second chance. There is a path forward for this pipeline and I think it's important that it gets finalized. For one, Keystone XL is really a no-brainer. It would create jobs, deliver oil to U.S. refineries, and would strengthen America's relationship with our strongest energy ally. But on top of that, it sets a tone that these companies and those of us who support affordable energy aren't going to stand for the misinformation campaigns that are perpetrated by the keep-it-in-the-ground crowd.

CAEPLA: What more can TransCanada do to reassure landowners, the public, and regulators on the environmental front?

TP: Ultimately, I hope we can get back to a more sensible and honest dialogue about pipeline infrastructure. The fact is, there are millions of miles of pipelines in this country that are safely transporting our energy resources. Pipelines are a safe and environmentally friendly way to move these vital resources. That hasn't changed. 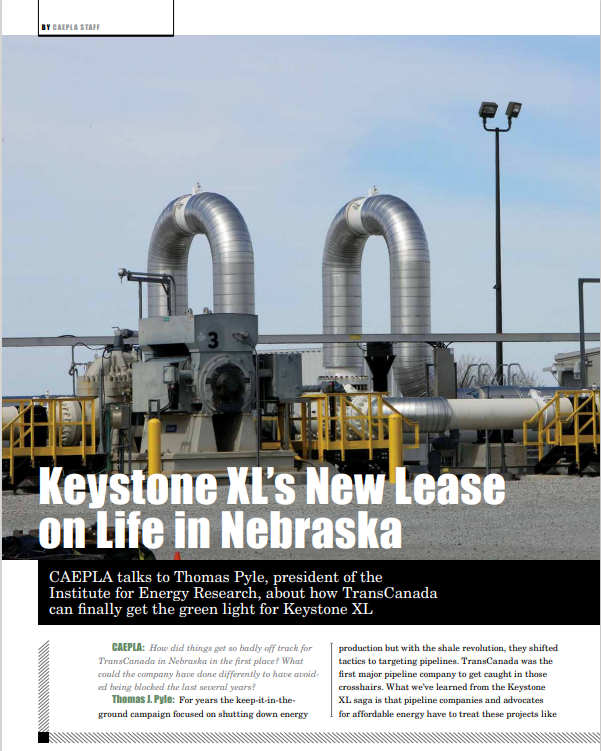 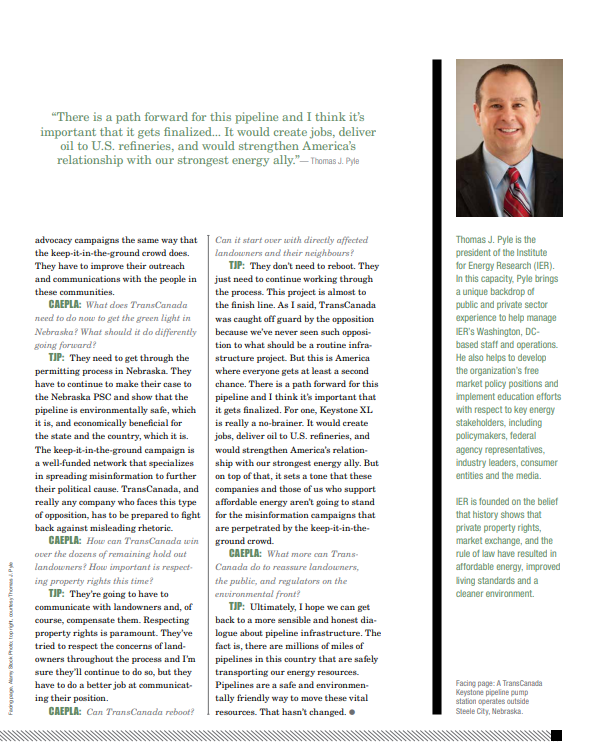 Thomas J. Pyle is the president of the Institute for Energy Research (IER). In this capacity, Pyle brings a unique backdrop of public and private sector experience to help manage IER’s Washington, DC-based staff and operations. He also helps to develop the organization’s free market policy positions and implement education efforts with respect to key energy stakeholders, including policymakers, federal agency representatives, industry leaders, consumer entities and the media.

IER is founded on the belief that history shows that private property rights, market exchange, and the rule of law have resulted in affordable energy, improved living standards and a cleaner environment.