Keystone XL Rises From the Dead

TransCanada gets a do-over: a second chance to do right by landowners

Can a pipeline company learn?

I sure hope so.

With the election of U.S. President Donald Trump in 2016 and approval from the Nebraska Public Service Commission late last year, TransCanada’s controversial Keystone XL project has been brought back from the dead.

Of course, the proposed pipeline never needed to be so controversial. But if you have been following the decade-long saga, you know that stretch of pipe has been beaten like a piñata by the North American green movement ever since President Barack Obama took office in 2008.

For seven long years, Obama played Lucy to TransCanada’s Charlie Brown with the political football called Keystone XL, before finally spiking it in 2015.

On top of all the lost time, TransCanada spent more than $3 billion US on the once-seemingly-defunct project.

With a second lease on life, TransCanada now has a chance to learn from past mistakes.

But what precisely were those mistakes? After all, the company had repeatedly passed every environmental and safety test imposed on it by the U.S. State Department, the federal bureaucracy tasked with reviewing the cross-border project.

TransCanada had put all its faith in that regulatory process, trusting that the president would do the right thing and approve it.

But Obama was more concerned with ensuring his legacy as the greenest president in American history, and saw the sacrifice of Keystone XL, the poster child for carbon “pollution” and proxy for Alberta’s evil oil sands, as the best way to guarantee his reputation with environmentalists.

War on the oil sands

So how did the green movement manage to make Keystone XL a cause celebre?

Obviously, the war on Canada’s oil sands was a big part of it. If oil is the opium in humanity’s addiction to carbon energy, the oil sands are heroin—and Keystone XL became the needle.

"I know the company can learn. It already has a blueprint for dealing successfully with landowners."

But in order to turn Nebraska, a notoriously conservative state, into TransCanada’s Waterloo, green extremists would need some political bedfellows.

And they found some strange ones—none other than many of the Cornhusker State’s farmers and ranchers, along with actual conservationists concerned about the vulnerable Sandhills dunes and Ogallala aquifer.

Why would conservative-minded farmers and ranchers join forces with green radicals to block an oil pipeline, you ask?

I mentioned that Nebraska is one of the most conservative states of the Union. At the core of that conservatism is a bedrock belief in property rights.

Perhaps due to its long history in Canada with the National Energy Board, TransCanada’s natural inclination, and its whole strategy to get XL across the border, was to win over the bureaucracy.

They, or rather their high-priced political consultants, failed to appreciate the importance of the grassroots, of political activism, and that ultimately, all politics is local.

I believe this was the company’s first and biggest mistake, one we hope it won’t repeat this time round.

By focusing solely on pleasing federal regulators, TransCanada overlooked the most important part of any pipeline project. Almost from the word go, the company alienated too many of its prospective business partners: local landowners.

Landowners were effectively taken for granted. The company appeared certain it could easily get every Right of Way required, and when it couldn’t, there was Eminent Domain.

Eminent Domain, known in Canada as expropriation, or forced Right of Entry, is the very opposite of respect for property rights. It is legal land theft, a way to transfer wealth from landowners to shareholders of a company with which they are unwilling to do business.

Things got so ugly on the entire Keystone route that some landowners wound up arrested, in jail or intimidated by armed private security—just for standing up to the company on their own land.

This, unsurprisingly, alienated not only directly affected farmers and ranchers, but real-life social networks—their families, friends, neighbours, business partners and the general public across the heavily rural state.

This created fertile fields for green activists to sow seeds of discontent and resistance to the project when they descended on the scene.

This series of events, all arising from TransCanada’s initial lack of respect for landowners, is what turned Nebraska into a minefield for the company.

And it provided Obama with all the political cover he needed to constantly delay and ultimately kill Keystone XL.

But with the resurrection of the project, and some controversy regarding whether the NPSC approval—which involved stipulating a new route—is legal, will come renewed campaigns from the anti-pipeline green agitators.

If TransCanada has learned anything from its 10-year XL ordeal, it ought to be to do right by local farmers and ranchers. And to answer my own question from above, I know the company can learn. It already has a blueprint for dealing successfully with landowners. Four of them in fact.

I refer to the agreements we at CAEPLA negotiated for our Canadian pipeline landowners with TransCanada during the whole time XL was in peril south of the border.

TransCanada was vilified by some in Nebraska for being Canadian. And yet if the company had been more Canadian, behaved more like it did with Canadian landowners, it might have avoided conflict with property owners south of the border altogether.

And by avoiding conflict with those landowners, Nebraska would have been very unfriendly terrain for eco-agitators, which would have meant no stage for Hollywood virtue signallers and no story for global corporate media to report.

Meanwhile, I would love to tell you all about those win-win business agreements CAEPLA concluded with TransCanada in Canada. But I can’t.

The company insisted we keep the details we agreed to on Keystone, Keystone XL, Groundbirch and Towerbirch confidential.

In our Fall 2017 issue, we commented on abandonment issues and the application by Nova Gas Transmission Ltd. (NGTL) to the NEB for the abandonment of the Peace River Mainline (PRML).

We are pleased to update that CAEPLA has resolved all issues with NGTL (a wholly owned subsidiary of TransCanada) with respect to its Peace River Mainline Abandonment project and as demonstrated in NGTL’s regulatory filings, NGTL is taking landowner concerns seriously. NGTL has reiterated that landowners will not be liable for the costs of abandonment.

And that is about all we can say. But our advice to TransCanada CEO Russ Girling is this: release us from the confidentiality clause of those agreements you arrived at with CAEPLA so that we can speak openly with Nebraska landowners about negotiating similar win-win business agreements for them.

Doing so would be some of the best grassroots PR you can avail yourself of. And we suspect the outside anti-pipeline agitators would soon find Nebraska a little bit less hospitable.

By bringing more Canada—and more CAEPLA—to your new route through Nebraska, a genuine partnership with local landowners is possible.

Nebraska landowners deserve another option. Another approach from the one taken, for instance, by your adversaries with Bold Nebraska.

And to Nebraska landowners: there really is another way.

Ask Mr. Girling to release the agreements TransCanada signed with CAEPLA (we are also registered in the US as the Continental Association of Energy and Pipeline Landowner Associations).

And then we urge you to join CAEPLA. Then together we can work to persuade the company to negotiate a win-win business agreement—like it has done many times in Canada.

You may be pleasantly surprised. And you won’t need to be anybody’s strange political bedfellow.

Dave Core is founding president and CEO of the Canadian Association of Energy and Pipeline Landowner Associations. Dave has been active in the pipeline landowners movement for nearly three decades. 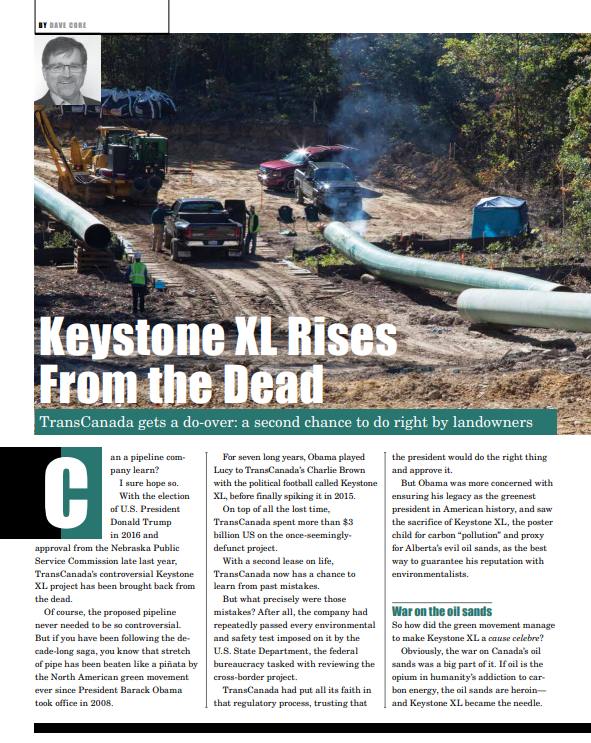 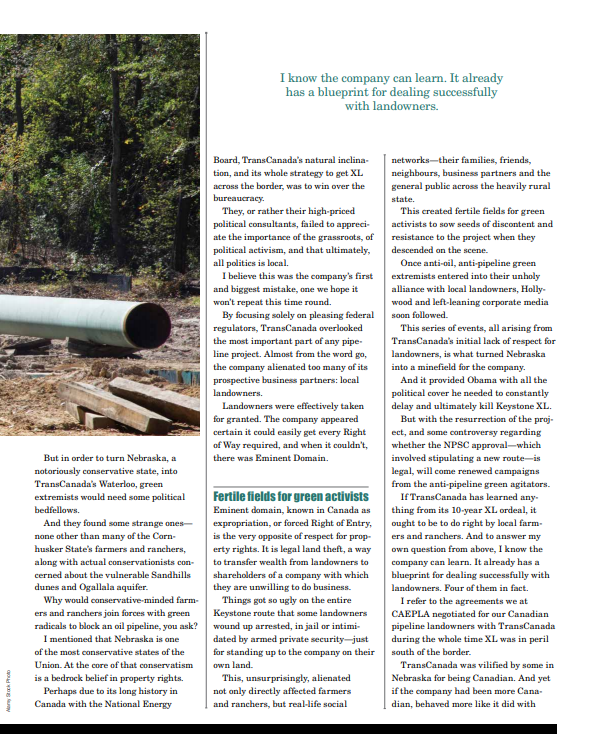 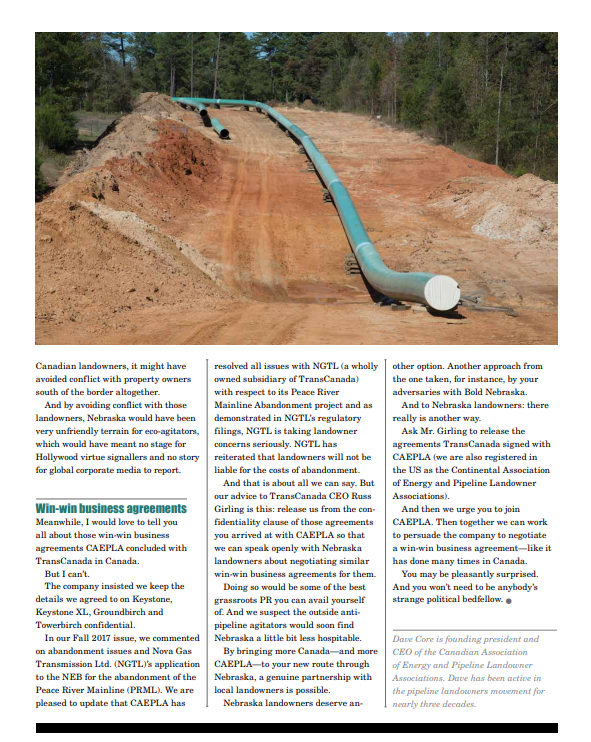