The 622,000 barrels per day (bpd) pipeline was shut last week after it spilled 14,000 barrels of oil in rural Kansas, including into a creek. Bitumen tends to sink in water, making it harder to collect than oils that float.

The parts of the pipeline carrying oil from Alberta, Canada, to refineries in Illinois opened on Wednesday at reduced capacity. The ruptured portion that extends from south of Steele City, Nebraska, to a storage hub in Cushing, Oklahoma, remains closed.

Bitumen from Canada's oil sands is a dense, thick form of oil that shippers dilute with lighter oils so it can move through pipelines. The resulting product is called dilbit for short.

A 2016 National Academy of Sciences study for the U.S. Department of Transportation examined whether transporting dilbit carries different environmental risks than other oils, following a 2010 spill in Michigan.

The report said that when diluted bitumen spills, a thick, dense material forms as a residue after exposure to the environment. The residue tends to stick to surfaces, sometimes sinking to the bottom of a water body.

“For this reason, spills of diluted bitumen pose particular challenges when they reach water bodies,” the report said.

Crews are using equipment to skim oily water off the surface of Mill Creek in Kansas and to vacuum crude into trucks. Colder temperatures may hamper the cleanup, the EPA said.

Cleanup of the 2010 Enbridge Inc (ENB.TO) pipeline spill lasted years because of the difficulties collecting dilbit, said Keith Brooks, campaigns director at Environmental Defence, adding that recovery in Kansas may be no different.

"I would expect it's going to be a long, long time.

The Sierra Club, another environmental advocacy group, questioned why parts of the pipeline reopened before TC Energy had identified the leak's cause.

"How can we be assured that other segments of the pipeline aren't equally prone to failure?" said Zack Pistoria, Sierra's lobbyist in Kansas.

More than 400 people are involved in the cleanup including personnel from EPA, U.S. Pipeline and Hazardous Materials Safety Administration, state and local agencies, TC Energy and TC Energy contractors, the agency said.

The response team has so far recovered 5,567 barrels of oil-water mixture from Mill Creek.

The EPA said four dead mammals have been recovered, and 71 fish.

TC said in a statement that it has excavated around the ruptured pipeline segment, calling it a milestone in the repair and investigation process.

Enbridge meanwhile increased its rationing of space on its oil Mainline for January, in a sign that demand to ship Canadian barrels south is outpacing pipeline capacity after the Keystone outage. 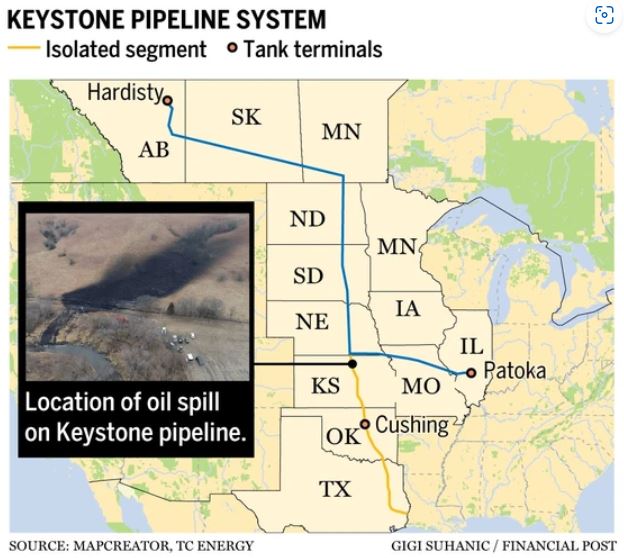