How a small-town Prairie boy had an enormous impact on the grassroots, free market movement in Western Canada

“Kevin’s work as an effective grassroots thought entrepreneur was recognized by the pro-freedom Atlas Network, which has assisted the start up of free market thinktanks around the world.”

Canada has many unspoken public policy heroes. These quiet change agents are responsible for persuading government to make the course corrections that have kept Canada on track as a relatively sophisticated modern market economy. Often under the radar, they are oblivious to the self-indulgent prattling of the chattering classes in the media, academia and government.

One such invisible hero is Kevin Avram, whose trail of life activities has made Canada, and particularly western Canada a much better place. Avram was instrumental in creating important organizations that promoted the interests of the average citizen and the taxpayer, and also helped defend the property rights of entrepreneurial farmers and landowners against major corporate players and governments.

I first met this small-town guy from Rouleau, Saskatchewan in the late 1980s. As a young policy analyst in the Devine government, I was involved in the history shaking privatizations of crown corporations and government services. Predictably, these were controversial policies that upset the comfy status quo of all the interest groups that benefitted from what is now widely seen as third-world style government ownership of the economy. Hello, government unions and their handmaiden left-leaning academics and politicians.

Out of nowhere, our clipping service began picking up highly articulate letters to the editors that pointed out how these crowns were a burden to taxpayers and fixtures of the past. I tracked the letters down to Kevin Avram, who soon sat down with me and announced he was starting the Saskatchewan Association of Taxpayers. It was modelled on some of the citizen taxpayer groups he had been observing in the USA. He signed me up as the first member, and the rest is history.

Avram had learned how to sell memberships for an organization of free enterprise farmers using commissioned sales agents. He brought the formula to what eventually exploded into several provincial taxpayers’ organizations which eventually merged into the Canadian Taxpayers Federation.

That organization was the catalyst for a major wave of citizen and taxpayer anger. Waves of taxpayer association rallies, in combination with the rise of the Reform Party, set the Ottawa spending establishment on its head and culminated with the unprecedented federal spending cuts under Prime Minister Jean Chretien and his Finance Minister Paul Martin. Today, these cuts are widely heralded as critically important reforms that set the stage for the booming Canadian economy in the early 2000s. In Manitoba, the organization managed to get its model balanced budget legislation passed.

Avram lost control of the organization in a dispute with his hand-picked board of directors. However, he went on as a serial start-up entrepreneur forming several other organizations that continued the bottom up, grassroots ethic of local citizen control, as well as fighting against big government control of the economy.

His work at the Prairie Centre targeted the end of the Canadian Wheat Board monopoly, explaining how the Prairie economy was being shafted by a temporary war measure of a monopoly government marketing agency gone rogue. It was only under Stephen Harper that the board was disbanded—again to great positive effect on the Western Canadian farm economy.

As editor of CAEPLA’s publications in the late 2000s, Avram defended the property rights of farm producers in relation to energy and pipeline companies.

His most recent venture was Grassroots Alberta which has set its guns on the church of climate change, particularly its convoluted salvationist taxes on carbon dioxide and its messianic, wildly out-of-control and misguided policies to shut down the conventional energy sector. The loss of over 120,000 jobs in Alberta’s energy sector is directly attributed to these anti-energy policies which can be traced directly to a climate change obsessed federal government’s policy of deliberately stifling new pipelines to aid the “phase-out” of the Alberta oil sands. The lack of pipeline capacity has created enormous collateral damage to conventional oil production as well.

The last contact I had with Avram was late last year. He had complimented a Facebook photo of me wearing a white baseball cap with a “Mont Pelerin Society” logo on it. So, I managed to snag an extra hat and mail it to him in Lethbridge where he now lives.

The Society is a high-powered group of thinkers and thought leaders who believe strongly in individual liberty and free markets. It was founded after a meeting of prominent economists in the small town of Mont Pelerin, Switzerland in 1947. It was organized by the Austrian economist Friedrich Hayek to create an “ideas” organization to push back on the growth of the overweening state and its predilection for central planning and government expansion. Hayek’s writings and life work battling big government earned him the Nobel Prize for economics in 1974. One of the thrills of Avram’s life was attending a Mont Pelerin Society meeting in its original Swiss birth place in 1997.

Avram’s work as an effective, grassroots thought entrepreneur was recognized by another pro-freedom organization the Atlas Network, which has assisted the start-up of free market think tanks around the world.

In December, Avram was diagnosed with brain cancer. It is serious, and his friends and family are unsure how successful surgery and further treatment will be. He is a mostly unspoken hero and a major figure in Canada’s tiny freedom movement who made an enormous difference in making Canada a better place to be.

Peter Holle is the founding president of the Frontier Centre for Public Policy, an award-winning western Canadian based public policy think tank. Of the nearly 100 recognized think tanks in Canada, Frontier is one of only 5 to make the 2008 global “Go-To Think Tanks” list published by the Think Tanks and Civil Societies Program of the Foreign Policy Research Institute in Philadelphia. His columns have appeared in dozens of newspapers, including the National Post and The Wall Street Journal. He has a master’s of business administration from the University of Wisconsin at Madison. He is a member of the Mont Pelerin Society, an international organization of classical liberals. 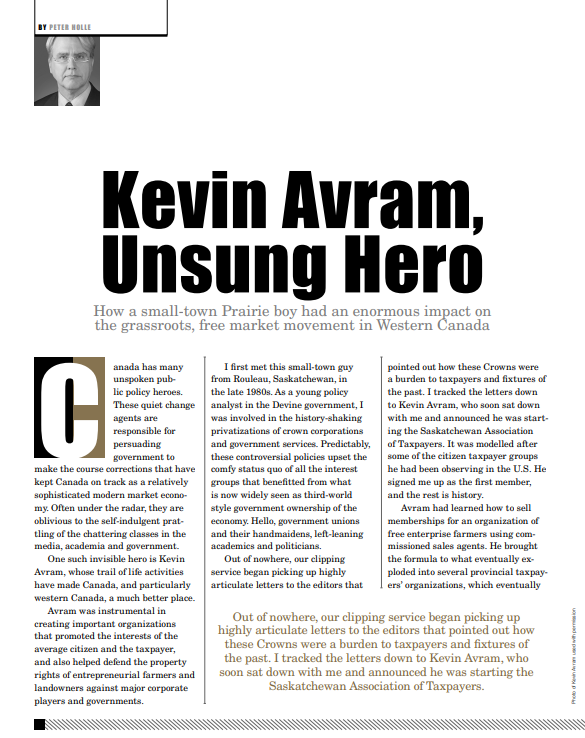 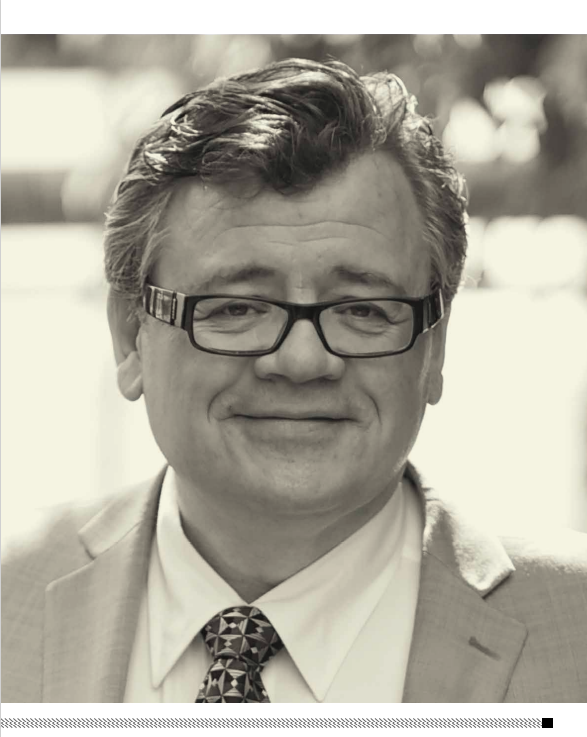 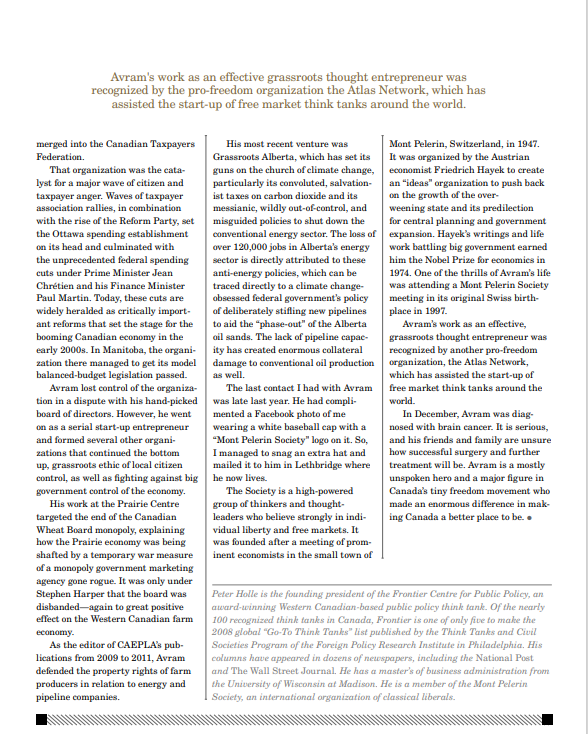