Is Ottawa at War With Its Own Citizens?

Laws attacking energy are an attack on property rights and are more destructive than bombs.

“Economic sanctions are blockades in all respects short of having troops on the ground or ships in the water.”

Economic sanctions are acts of war — and Ottawa has imposed de facto sanctions on its own people.

If this seems to be a major misuse of language, that’s because our political dialogue has already introduced distortions to our thinking on these concepts.

Politics is always characterized by the corruption of language. But it never stops with language. The corruption spreads to our thinking, because we mainly think through speech. So let’s try to clear the fog of this “war.”

We are familiar with the issue of sanctions. The word embargo has all kinds of more militaristic connotations, while sanction sounds nicer. But these are basically the same things.

Sanctions are a regular weapon for international relations. Perhaps most notably in the last few years, Russia has been prevalent in the headlines, subject to a sustained US-led campaign of economic sanctions that began in 2014. The most recent development is new US legislation to sanction Russia’s NS2 natural gas pipeline to Germany.

Sanctions were used to devastating effect on Iraq between the Gulf War and Bush II’s invasion in 2003. Hundreds of thousands of children died from lack of medication and proper nutrition.

Perhaps the most significant use of sanctions in the last century were oil, rubber, and steel embargoes on imperial Japan. This led to the attack on Pearl Harbor and America’s formal entry into World War II.

We understand the power of sanctions and why stronger nations use them against weaker nations.

But we don’t often ask whether a nation can put sanctions on its own people.

What else can we call Bill C-48, the coastal tanker restriction, but a form of embargo or sanction, as it specifically restricts export market access in a way that is clearly punitive to certain energy producing regions of the country?

What else is Bill C-69 but an attempt to discourage major projects that are critical to the growth of a key regional industry — again, using legislative fiat to impose a roundabout form of blockade?

Many industry analysts have called this the “No More Pipelines Bill” because it creates insurmountable regulatory hurdles to overcome. As such, it is a pillar of Ottawa’s embargo policy.

How else can one interpret these actions when the prime minister openly declares that a certain region’s main industry must be “phased out?”

Embargoes have long been a staple tactic in warfare. Economic sanctions are blockades in all respects short of having troops on the ground or ships in the water. Sanctions entail a threat backed by force of law against anyone in violation.

If judged by its consequences, the continuing sanctions against the economies of energy producing provinces in Canada are practically indistinguishable from how, say, the US treats Russia. Or Iran.

Economic sanctions are cruel and indiscriminate. We’re not talking about the quick execution of a sniper’s one-hit-kill or a hypersonic missile that destroys a target, but rather a deliberately slow, sadistic strangulation of an economy. Is that really any less hostile?

In fact, Ottawa would’ve done less damage to the country if they’d just bombed Alberta and Saskatchewan instead. Its economic interference has been far more harmful.

Exploded buildings can be rebuilt easily. The fundamental ability to be productive is much harder to restore once extinguished by a continuous assault.

With conventional warfare, the state uses weapons to kill its enemies. With sanctions, it strives to psychologically and spiritually degrade and demoralize the targeted people.

To illustrate this, you need merely look at some of the statistics out of Alberta over the last four years. Economic struggles are more than just numbers in spreadsheets. “Capital flight” is more than an academic idea in a textbook.

These things mean business closures. Bankruptcies. Family turmoil. Suicide (50 per cent higher in Alberta than Ontario). Escalating drug abuse. At the time of this writing, young Albertan men have a 20 per cent unemployment rate, more than triple the national rate.

To add insult to injury, the political class of the sanctioned population — enriched by taxation and generally not subject to the same suffering as others — uses the external threat to aggrandize and gather more power for themselves. The oppressed turn to their leaders for solutions and protection and find only different vultures with better PR.

The logical end result of sanctions is the absolute impoverishment of the target population. This appears to be Ottawa’s goal. As shown in the 2019 election, they don’t get many votes in those places anyway.

When the actions of Ottawa fit the model of economic warfare so closely, we have to call things as they are. The debate requires honesty about the relationship between Ottawa and the provinces. “If it walks like a duck…” 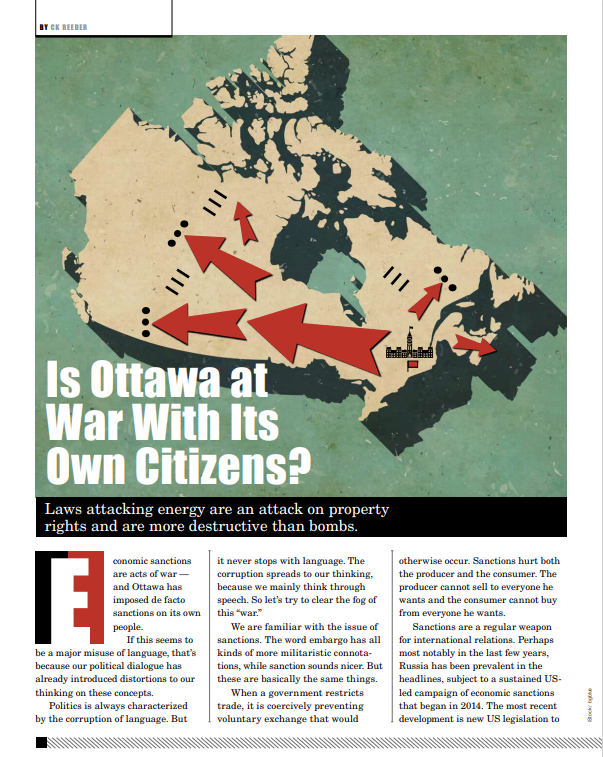 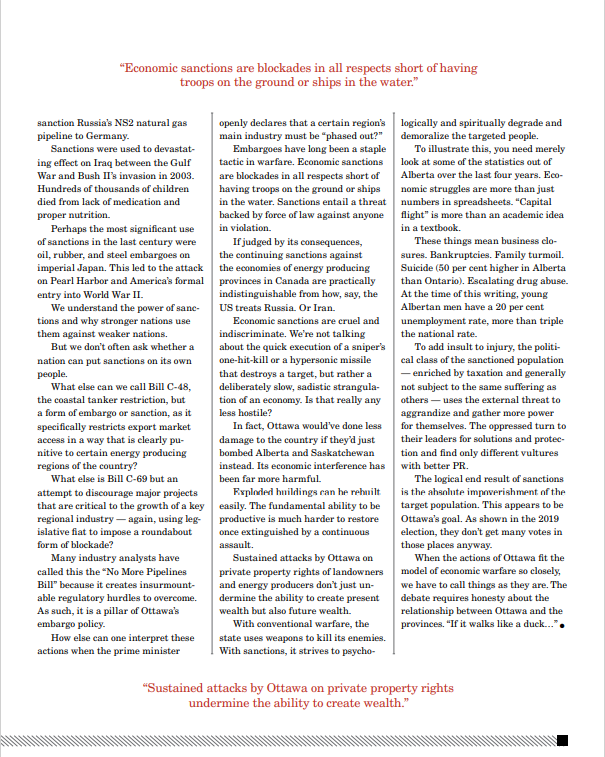