Is Expropriation Ever Really Necessary?

There are better ways to get pipelines built than NEB bullying

Expropriation is the forced taking of private land for public purposes. Canadians have a common law right to own land, and we all recognize that society benefits most when our relationships are voluntary rather than compulsory.

Yet most economists argue that the government needs power to expropriate right-of-way properties for projects that serve the “public good.”

This issue frequently arises for infrastructure like roads, utilities and oil pipelines.

The National Energy Board Act (NEBA) provides power of expropriation of land for pipelines in Part V:

73 (b) A company may … take and hold of and from any person any land or other property necessary for the construction, maintenance and operation of its pipeline and sell or otherwise dispose of any of its land or property that for any reason has become unnecessary for the purpose of the pipeline …

The typical argument for this revolves around a type of “market failure”—holdout landowners will make it impossible to acquire possession or usage of contiguous land parcels for a pipeline. People owning property in the pipeline’s path will hold out unless they get a huge price—a price in excess of the apparent fair market value.

The argument says the holdout problem is so severe that transaction costs would skyrocket and the pipeline would never be built—which is a worse outcome, assuming pipeline construction serves the “common good.”

So basically we would be stuck in the Stone Age without the government’s ability to expropriate. No highways. No railroads. No power lines. No dams. No pipelines.

Or so we are told.

But how real is this problem? Does it justify the abuses that landowners are subject to when they are up against powerful corporate and government interests?

Even many of the strongest critics of government expropriation power do not conclude that this power should be removed completely.

Most arguments in favour of expropriation depend on a couple of assumptions. One, that the project begins before all the land for the right-of-way has been acquired; and two, that only one right-of-way exists. These assumptions lead to undue concern over some “greedy” landowner who acts as a sort of monopolist seller because the buyer has no other option.

These assumptions rarely hold in real life. By default, pipeline builders must typically consider alternate routes and strategically negotiate with different groups of buyers. This increases competition, so sellers have an incentive to agree to fair offers.

The holdout problem also affects private companies and government differently. Private developers frequently consolidate large clusters of property without having their plans derailed. They can get deals done more quickly than governments, which suffer under bureaucratic procedures, limits and approval processes, and therefore an increased tendency for holdouts.

Private buyers can also use “dummy purchasers” or “strawman buyers” to protect secrecy and reduce the influence any one seller might exercise.

The public policy concern over holdouts applies much less to private transactions than when the government is involved.

To illustrate, consider two private highways in the United States. The SR-91 in California and the Dulles Greenway in Virginia obtained all the private land they needed without relying on government expropriation (or “eminent domain,” as they call it in the U.S.).

Furthermore, in practice, many industries use “combinatorial auctions” where the purchase of assets is contingent upon the purchase of other complementary assets. This type of system is highly appropriate for pipeline-related land acquisitions.

Markets have evolved many solutions for these types of challenges and, as usual, it’s the theorizing ivory-tower economists who merely assume a voluntary solution simply cannot exist.

The holdout problem is highly exaggerated by economists, and so the National Energy Board provides ways to compel a landowner to sell his land and be fully and fairly compensated. But what is fair? A voluntary exchange is fair by its very nature, while the fairness of compulsory takings depends on whom you ask.

Ultimately, a pipeline company knows that if an owner will not accept its price and terms, it can go to arbitration under Section 97(1) of NEBA and force the owner to sell. The landowner is, in theory, to be made whole by receiving proper compensation for giving up his land to serve the public good—as determined by bureaucrats.

The landowner is supposed to receive the “market value” of land taken (plus other compensation for other things—for instance, the loss of any special economic advantage).

While many people think this is reasonable in principle, determining a fair number for “full compensation” is inherently problematic. If there hasn’t actually been a sale, then there is no real “market price.” Remember, a market price is just the most recent historical price in an actual exchange.

When there hasn’t actually been a free exchange, any idea of “market value” is just an appraiser’s extremely subjective opinion of what a willing buyer and seller would agree on. This sort of assessment, distinct from a real-life voluntary transaction, is essentially arbitrary and therefore open to collusion, favouritism and influence peddling.

This changes the basic negotiation dynamic because the incentives for the pipeline company are different from what they would be without the ability to tap into the government’s expropriation powers. Incentives to bargain fairly are weakened substantially from the outset. This would tend to put downward pressure on prices offered to landowners.

At the same time, the government extracts massive wealth from the resource value chain with its royalties, leaving less money that could otherwise be used to bid up prices on land and diminish holdout issues.

The holdout problem is mostly fake, but because it is so feared, the NEB has given energy transport companies disproportionate power when trying to acquire land. Expropriation power could be entirely withdrawn and the market would still get pipelines built quickly, with more equitable results. 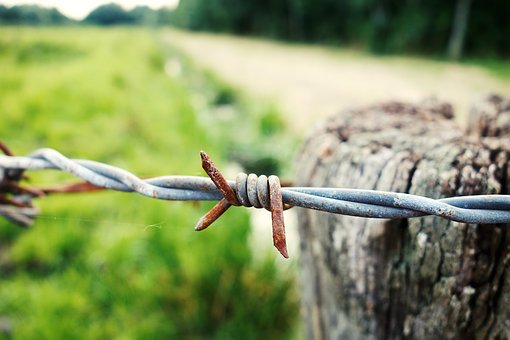 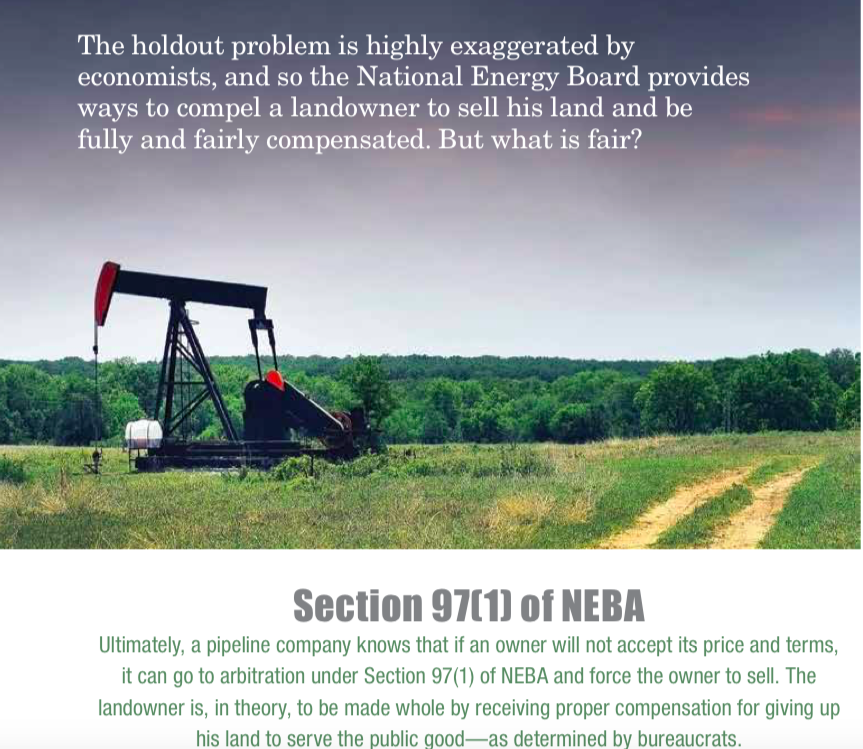 C. Kenneth Reeder is a financial analyst providing mergers and acquisitions advisory services for mid-sized, privately held companies in Western Canada. He works with many clients in the oilfield services sector. He is the editor and publisher of CanadianMarketReview.com and a contributing editor at WesternStandard.ca. He lives in Calgary.