Pipeline Landowners need to be proactive to protect biosecurity

An invasive species is any organism (plant, animal or fungi) that has moved outside of its original country or region (ecosystem) of origin and is displacing native species in a new environment. In the case of disturbed landscapes, invasive plant species can quickly become problematic.

Distinct advantages of invasive species aid their spread and success over native species:

Invasive plants have the potential to cause a lot of harm to the economy, to the environment and to human health. The CFIA estimates the annual impact of invasive plants in the agriculture sector is $2.2 billion. Prevention, early detection and rapid response are key to the control of invasive species. The longer a species has to establish itself, the more expensive it becomes to control and the less likely it is to be controlled successfully.

Development projects in the energy sector appear across a variety of landscapes: cultivated and uncultivated land, forests and wetlands. It is key to maintain native biodiversity and restore ecological integrity after disturbance to prevent the establishment and persistence of invasive species.

Research published by Brady W. Allred et al. in an April 2015 issue of Science magazine shows 50,000 new wells are constructed on average per year in North America. Despite significant disturbance, the influence of the energy industry on invasive species is unknown. In some cases, companies have mistakenly seeded disturbed sites with introduced species. Current regulations from the Government of Alberta provide guidelines for native reclamation mixtures consisting of green needle grass, slender wheatgrass and western wheatgrass in uncultivated landscapes.

PhD candidate Lysandra Pyle, under the supervision of Dr. Edward Bork, is currently looking to quantify the impact of oil and gas industry structures (mainly pipelines) on plant communities, seed banks and biological soil crusts. Her work investigated vegetation and seedbanks in transect samples from 18 pipelines in southeast Alberta at the University of Alberta’s Mattheis Research Ranch.

Soil crusts (composed of lichens, mosses, etc.) are important in regulating nutrient cycling and moisture retention; they also reduce bare ground. Species richness and cover were reduced in disturbed areas and are known to have slow recovery following mechanical disturbance. Restoring a plant community without the associated soil crust could leave the community susceptible to invasive and introduced species.

$2.2 billion
The annual impact of invasive plants in
the agriculture sector is $2.2 billion.

If invasive species are identified, they should be reported and control measures should be implemented as soon as possible. A variety of mechanical (mowing/tillage), chemical (herbicides), cultural (burning) or biological (natural predator or targeted grazing) controls are available depending on the species and degree of invasion.

Like any good biosecurity plan, prevention is key and diligent monitoring is required.

Andrea De Roo has a BSA in Agronomy and is an M.Sc. candidate pending P.Ag. A proud farmer, she is also the daughter of Wayne De Roo, who along with Gerry Demare and Daniel Hacault was part of the CAEPLA negotiating team instrumental in developing the robust clubroot biosecurity protocol recently negotiated with Enbridge on the Line 3 Replacement project. 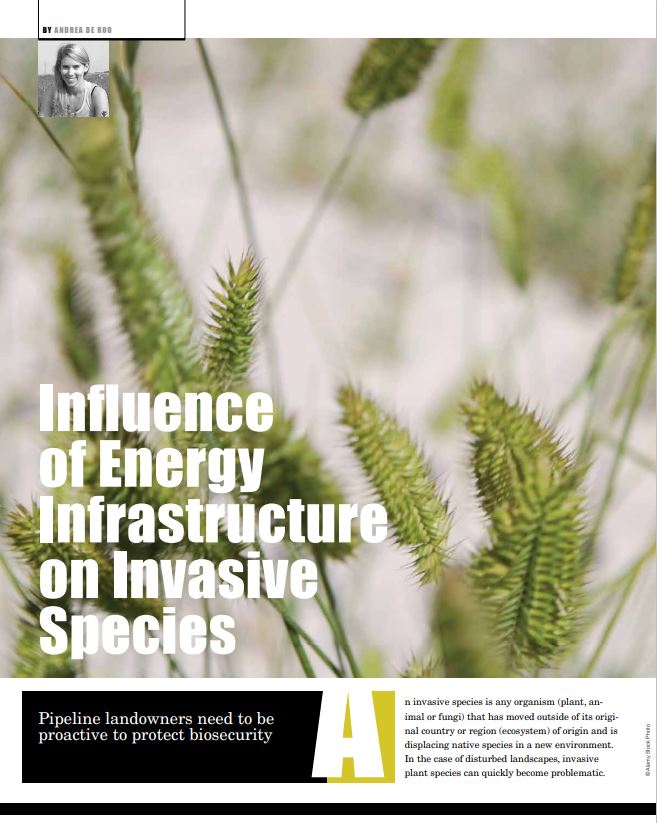 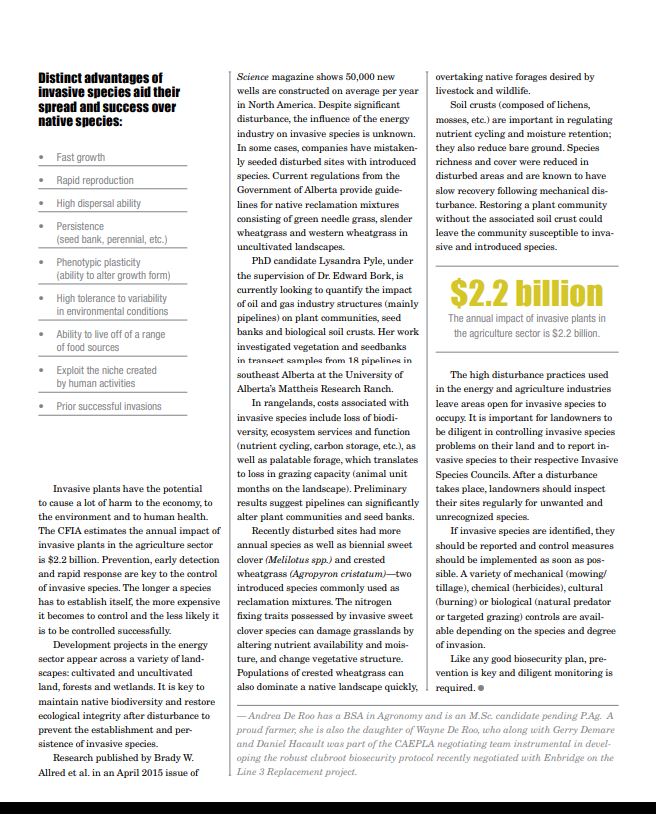