Ottawa has “manufactured” over half a trillion dollars through COVID-19, so brush up on your economics

There are many great manufacturing industries in Canada, among them petroleum, automotive, aerospace, food and beverage and yes, inflation.

The success of the first four are a source of wealth. They stem from the ability of Canadian producers to profitably supply consumers in Canada and elsewhere, particularly those in the United States. The goods and services these Canadians produce and sell enable them to acquire all the other goods and services they wish to consume.

The latter is the increase in the quantity of fiat money and credit manufactured by the Bank of Canada. This manufacturing activity is counterproductive—it destroys wealth by setting in motion an exchange of nothing for something and diverting real resources away from wealth generators toward the holders of the newly created money. The first recipients can spend it on real goods for themselves without prior production of goods or services for others.

In every country and in every era in which it has occurred, inflation has been a large, metastasizing problem. And not just an economic problem, but also a political and moral one.

“Increased taxation limits the scope of entrepreneurs to reinvest back into their business, reducing the productivity of land.”

The current situation in Canada is no exception. In 2020, M1+ (the narrowest measure of Canada’s money supply), increased by $328 billion. That quantity of newly created money exceeds the combined total revenues earned last year by the 15 largest manufacturing industries in Canada.

M1+ has increased by an additional $171 billion during the first nine months of 2021. While the Bank of Canada can manufacture more money by buying government bonds, it can’t manufacture the goods for that new money to buy.

With so much inflation in such a short time span, it is no wonder Canadians are witnessing a sharp decrease in the purchasing power of their money. Each individual dollar becomes less valuable as more dollars are conjured into existence, resulting in a general and sustained rise in prices. An increase in the quantity of money is the cause and rising prices are the effect. Widespread misuse of the term “inflation” to refer to rising consumer prices deflects attention away from the real cause and its only real cure.

What is seen, as the newly created money works its way through the economy, consumer prices—and often asset prices, such as home prices—tend to rise before wages rise. But perhaps what matters more is the damage inflation inflicts on the wealth generation process. Increases in money supply set in motion an exchange of nothing for something, which generates economic outcomes comparable to counterfeit money. The purchasing power of money is reduced, causing losses to all other holders because their money buys less. It raises the price level, discourages savings, distorts the allocation of capital, increases the cost of overhead and thus weakens the ability to generate wealth.

Inflation turns hard assets into a target for taxation

For Austrian School economists Ludwig von Mises and Murray Rothbard, increasing the money supply is embezzlement. Even English economist John Maynard Keynes acknowledged the subject matter of inflation as embezzlement. “By a continuing process of inflation, governments can confiscate, secretly and unobserved, an import- ant part of the wealth of their citizens. By this method they not only confiscate, but they confiscate arbitrarily; and, while the process impoverishes many, it actually enriches some.”

Inflation gets capitalized in the prices of hard assets. Hard assets with higher nominal values become targets for taxation, whether by pushing people into higher tax brackets or via proposed real estate equity wealth taxes through “unrealized” gains taxes. The greater the value of assets, the greater the tax would hit in most cases. Increased taxation limits the scope of entrepreneurs to reinvest the proceeds back into their business, reducing the productivity of land and other inputs.

How do you stop inflation? Remove the cause.

The solution is in the preamble to the act respecting the Bank of Canada. Its purpose is “To regulate credit and currency in the best interests of the economic life of the nation, to control and protect the external value of the national monetary unit and to mitigate by its influence fluctuations in the general level of production, trade, prices and employment, so far as may be possible within the scope of monetary action, and generally to promote the economic and financial welfare of Canada.”

That purpose is realized to the extent that money creation is stopped.

Danny Le Roy, PhD., is an economics professor at the University of Lethbridge where he is also coordinator of the Agricultural Studies program. Areas of research include commodity production, marketing and trade, government interventionism and Austrian economics. He blogs occasionally at mises.ca. 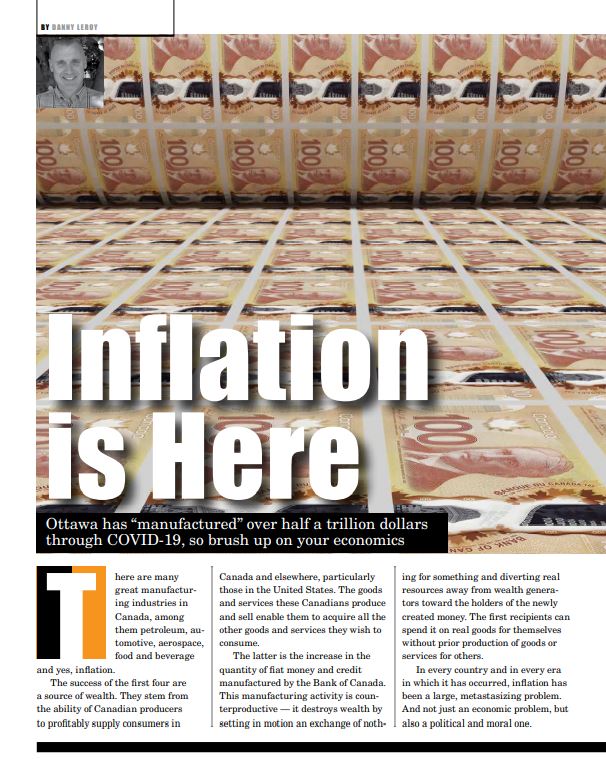 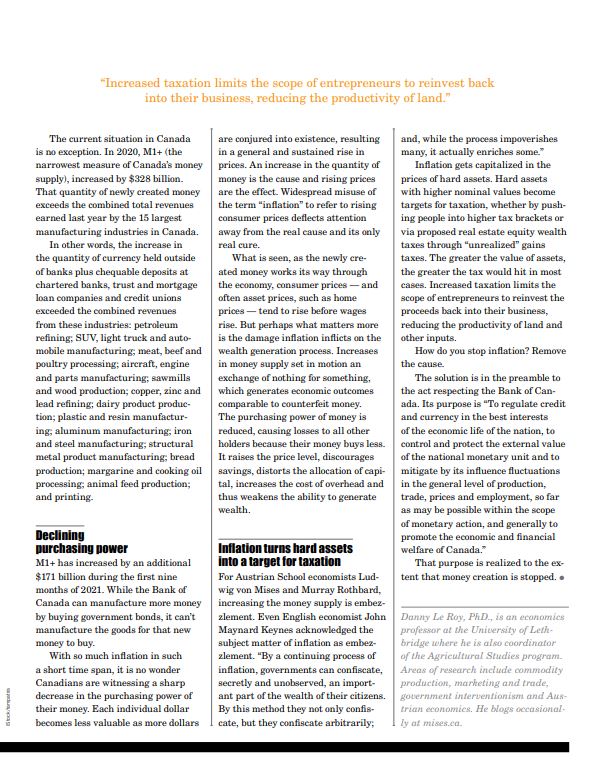