Land is the ultimate investment for most farmers. As the saying goes, “They’re not making any more of it.”

But farmland value reflects more than scarcity and location. As a result, critical thinking and keeping a sharp pencil are key to making wise, dispassionate decisions about buying, selling, or renting farmland.

All aspects of agricultural production, whether it’s a tractor, a grain bin, or farmland, yield a flow of services per unit of time. For each, the anticipated marginal productivity over time has an important influence on its valuation by buyers and sellers. Many other variables do as well.

Farmland provides a particularly compelling example. Since 1993, farmland prices have increased every year in Canada. The annual rate of increase was particularly rapid from 2011 to 2015, with single-digit percentage increases more recently.

Let’s unpack these explanations. If individuals were certain about the future, farmland prices would reflect the present discounted value of the net income stream generated from it. Thus, if a parcel of farmland is expected to yield a perpetual annual net inflow of $300 per acre at a constant interest rate of five per cent, the market price would be $6,000 per acre. That would be the prevailing price in a world where everyone is certain about the future earnings of that farmland and the unwavering interest rate.

Clearly, this is not the world in which we live. However, by understanding the basic process of asset pricing, one can deduce how changes in the underlying fundamentals influence farmland prices.

“Most farmers don’t care what happens to the Canadian money supply, but they care a lot about their input costs and the prices they receive for their outputs. Change in the money supply distorts both.”

For example, if the perpetual annual net inflow doubled to $600 per acre, the market price for an acre of farmland would rise from $6,000 to $12,000, all else constant. As a second example, consider the impact of a decrease in the interest rate from five to two per cent. Everything else the same, the market price of farmland would rise from $6,000 to $15,000 per acre.

These two examples are insightful, but they still lack realism. Farmland pricing is not mechanically capitalizing its known, certain physical productivity. Future income streams are variable and not known with certainty. Further, the value individuals ascribe to farmland is subjective — time, place and circumstance specific. The same parcel of farmland has different worth to different people at different times. A litany of other variables must also be considered — taxation, adjacent landowners, obtaining unimpeded right-of-entry, easements on the property, even activists. Finally, there is the incomplete and frequently contradictory knowledge possessed by separate individuals who manifest in differences in managerial and entrepreneurial decision-making.

With so many unknown and unknowable aspects, what is known about market-based transfers of farmland ownership? At least three things. First, each counterparty sacrifices something they value less to obtain something they value more. Second, price and timing are critically important. And third, resulting prices may be public knowledge, but the valuations of each counterparty is subjective and private.

Another reality is the present value of the expected net income stream from farmland is unique and in the discerning mind of the farmer. Also unique and on the farmer’s mind is the value of money presently needed to acquire farmland. Most farmers don’t care what happens to the Canadian money supply, but they care a lot about their input costs and the prices they receive for their outputs. Changes in the money supply distorts both.

M1+ is the narrowest measure of Canada's money supply. It consists of anything that can be spent in Canadian dollars without notice — currency held outside of banks plus chequable deposits at chartered banks, trust and mortgage loan companies and credit unions.

Properly understood, inflation is an increase in the money supply. The effect of inflation is a reduction in the purchasing power of money. Newly created money in Canada is being used by early recipients to bid up asset prices, most notably stocks, houses and farmland. Corn, soybeans, canola and wheat are also trading at multiyear highs. Inflation is another reason why farmland prices have surged to levels not justified by other factors.

Be careful. Artificially low interest rates and the anticipated effects of inflation can make long-term investments appear more profitable than they really are.

“Newly created money in Canada is being used by early recipients to bid up asset prices, most notably stocks, houses and farmland.”

The Bank of Canada can create more money by buying government bonds, but it can’t create farmland for that newly created money to buy. Depending on the preferences of those who first receive the newly created money, some goods will experience an increase in demand while others a relative decrease. This in turn changes outputs of various goods and ultimately the pattern of investment.

Printing money doesn’t create prosperity, it redistributes it while confounding decision-making for farmers and for everyone else.

Danny Le Roy, PhD., is an economics professor at the University of Lethbridge where he is also coordinator of the Agricultural Studies program. Areas of research include commodity production, marketing and trade, government interventionism and Austrian economics. He blogs occasionally at mises.ca. 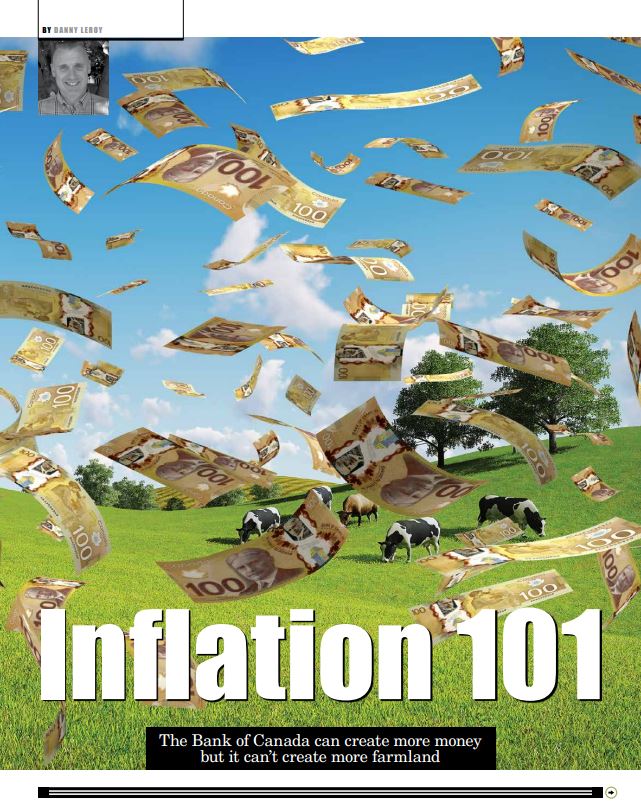 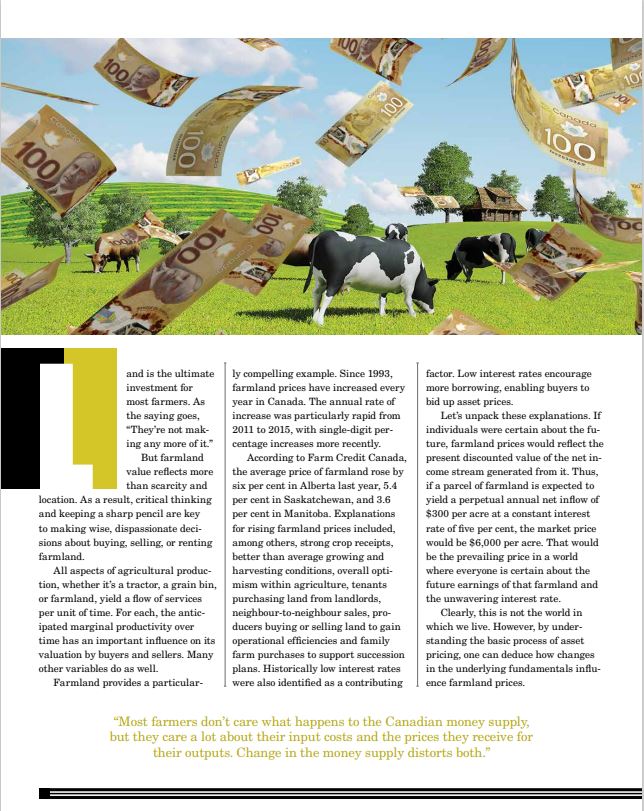 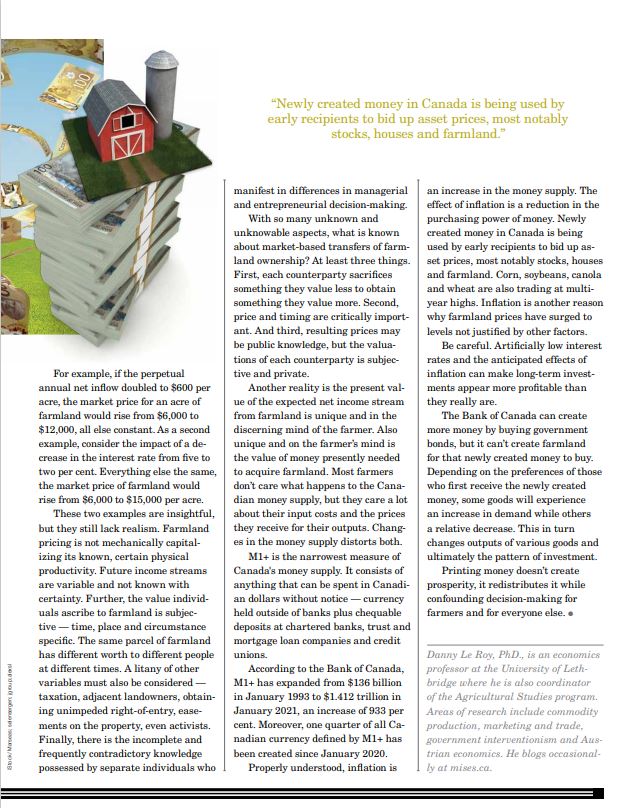