The future of the energy transport industry depends on it

Why do pipeline companies negotiate with native bands instead of individual Indigenous landowners?

It’s because for the most part there are no individual Indigenous landowners. Under the reserve system of the Indian Act, no one in a band owns land at all.

We have almost 1.5 million Canadians stuck on 30,000 square kilometers of land where they lack basic property rights so fundamental that most of us don’t even realize we have them.

Sometimes we speak casually as though the band owns reserve lands in some collective sense, but even that isn’t true. For the most part reserves are actually owned by the Crown—meaning the federal government.

Also, Indigenous people cannot homestead any of the vast amounts of Canada’s Crown land for mineral exploration or agriculture or anything like that. Ottawa makes those decisions. They cannot use their homes as security for loans to start a business.

So we have almost 1.5 million Canadians stuck on 30,000 square kilometers of land where they lack basic property rights so fundamental that most of us don’t even realize we have them.

The result is poverty.

Indigenous land is administered by bureaucrats at the Department of Indigenous Affairs in Ottawa. Think about that for a minute.

Imagine if no one in your neighbourhood were allowed to own a house, with everything run by 5,000 bureaucrats in Ottawa. Is there any doubt that your neighbourhood would rapidly become depressingly poor, with homes marked by decrepitude and the people by social dysfunction?

Indicators of social dysfunction on reserves parallel those seen in Soviet Russia—high unemployment, suicide, capital consumption, alcohol abuse and so on.

The poverty on some reserves is startling but it shouldn’t surprise anyone. The third-world conditions of many reserves sadly illustrate the consequences of ignoring economic laws and treating Indigenous people like bulk-rate second-class citizens.

Now, other than generally encouraging a culture of short-sightedness and its resulting poverty, this has interesting implications. More specifically, when it comes to big energy infrastructure projects, it means decision-making is centralized and subject to political interference.

Many energy industry supporters begrudge Indigenous bands—along with radical environmentalists—for stonewalling economically important projects even when they seem like no-brainers that would fill the bands’ treasuries with money that could make big differences in the people’s lives.

But it’s always easier to influence something when all the power is located at the top. It’s harder to wield influence when decision-making power is spread out.

We criticize the National Energy Board because it takes on so much decision-making power that it becomes a focal point for influence-pedding and collusion. The band structure is unfortunately similar.

As a practical matter, most band councils are worse than feudal lords and are something more akin to Soviet commissars. Like your average power-loving politician, many band councils want to enrich themselves. If that just leaves scraps for everyone else, oh well.

If a radical eco-activist group gains influence with band leadership, that may shut out the common band member from having his or her voice adequately considered, despite the carefully crafted illusion of consensus, consultation and solidarity.

Band councillors tend to be wealthier than the common man or woman on Indigenous land, so it doesn’t necessarily affect them much if they reject major investments. But this precludes everybody else from prospering.

Some Indian Act reactionaries and apologists argue that our concept of “private property” is a Western concept and it doesn’t fit with indigenous social values.

There is a lot of evidence that this isn’t historically correct, but in any case communal property is still a form of private property. We can illustrate this by considering the common areas of a condominium. They are still “private property” even though they are collectively owned.

Reforming the legal rights of Indigenous Canadians might seem politically impossible, especially when so many benefit from the status quo.

But we should strive to make it one of this country’s top ethical priorities.

This would be infinitely better for our Indigenous people and our energy industry. 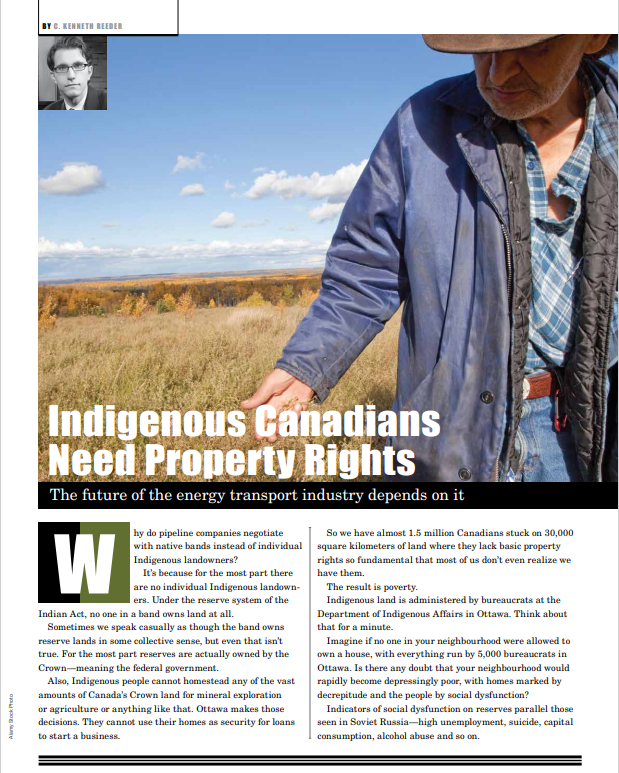 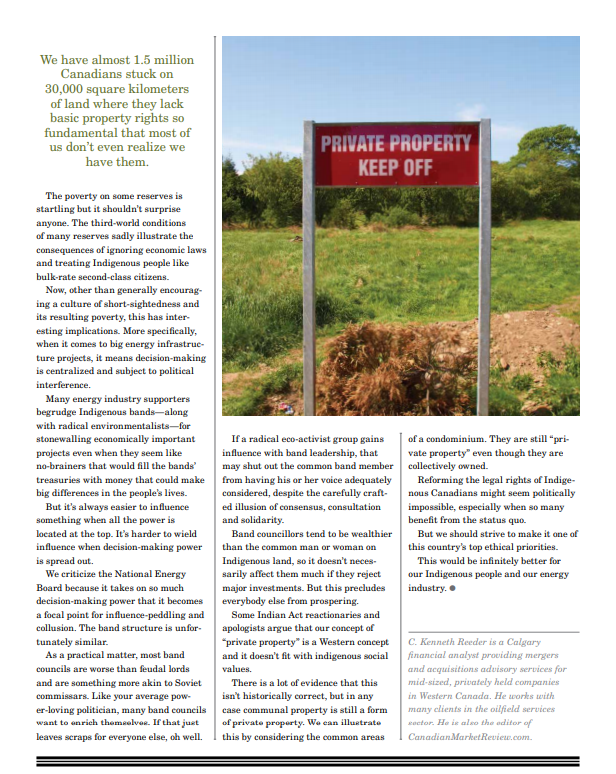