If CO2 Is a Problem, Prairie Farmers Are Already the Solution

By Margaret Hansen and Stephen Vandervalk

Modern prairie growers of grains, oilseeds and pulses have a great story to tell—a story that began more than 25 years ago.

We have significantly reduced carbon emissions and we continue to reduce them further each and every year. Prairie innovation and technology have led this effort, and it’s been exported around the world. Conservation and sustainability are essential to profitability, so we live it.

The 2015 Paris Agreement has led to talk of a national policy on carbon pricing, with the goal of reducing emissions. Provincial policy mechanisms are also being discussed, including carbon taxes or cap-and-trade systems. At this point, the focus has been on major greenhouse gas emitters—coal and oilsands producers—especially on questions around practical implementation of a carbon-pricing scheme.

Growers are already achieving this desired government policy outcome by reducing carbon emissions, but we’re now concerned about what carbon pricing will mean for our farms.

If growers—and food, in turn—are going to get hit with carbon taxes on our fuel, fertilizer and key farm inputs, it would be a perverse way of recognizing the major GHG reductions grain farmers in Western Canada have already accomplished, and continue to realize. Decision makers need to take the debits and credits—the outcomes—into account when determining a fair carbon pricing system.

On a life cycle basis, prairie grain farmers are close to—or already are—producing net zero carbon emissions by extracting carbon from the atmosphere and sequestering it in plants for the purpose of producing food; this while producing more food today on less land than in the past.

There have been considerable energy efficiency gains made in tractors, trucks and combines—many of these innovations found by great agricultural equipment manufacturers here on the prairies. Cleaner engines today are just the beginning, with more electric and on-farm renewable fuels and energy for tomorrow.

Our grandparents used to plow up the soil, but with precision farming today, growers practice reduced or entirely no-till farming. Fuel use is cut because farmers are not passing through the field to plow the soil or apply pesticides again and again, as in the past. No-till has additional benefits in drier areas where less irrigation is needed, further enhancing fuel savings and soil conservation.

Plant science innovations are remarkable. Productivity gains and yield advances with reduced inputs in wheat and canola—just two examples—are impressive. This is happening because of advances in genetics and plant breeding, modern plant protection products, and improved soil health through agronomy. Again, much of this advancement is driven by home grown prairie crop-science innovators.

A 2015 CropLife Canada study, The Value of Plant Science Innovations to Canadians, quantifies these significant contributions farmers have made in major environmental footprint reductions, noting: “Since 1990, the reductions in tillage owing to the use of plant science innovations have resulted in a 3.8-fold increase in carbon sequestration in cultivated land, reducing greenhouse gases (GHGs) by about 4 million tonnes per year. Decreases in summerfallow add another 5.2 million tonnes of GHG reductions through carbon sequestration.”

As farmers, we’re producing more food on less land, and we’re continuing to reduce GHGs further, including reductions of diesel fuel use approaching 200 million litres each and every year. Canada’s GHGs are steadily increasing, but in the grain-growing sector they’re clearly decreasing.

When determining carbon-pricing schemes, governments need to consider the good news environmental outcomes that western grain growers are already contributing. It would be a perverse policy decision to punish innovative growers who are already achieving the desired outcome of government: reducing carbon emissions. 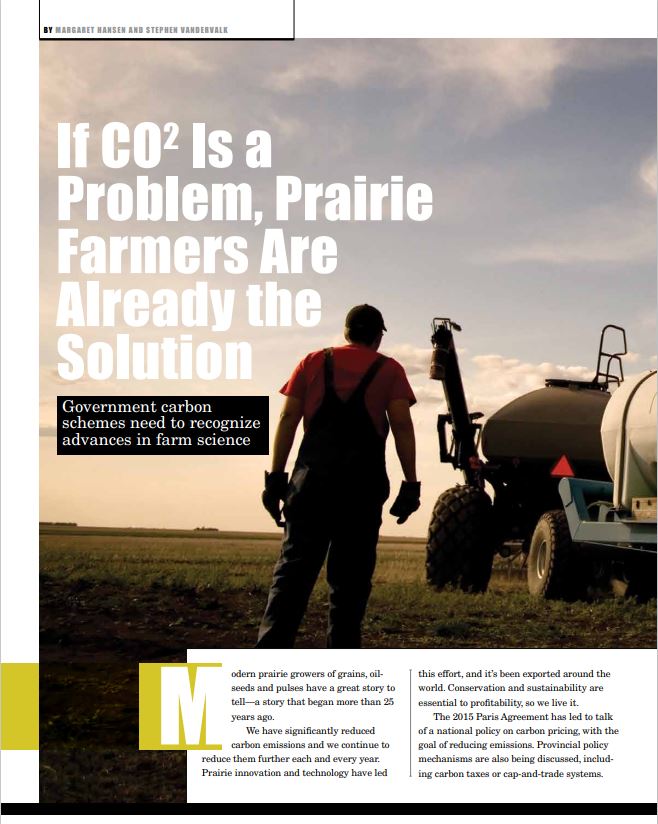 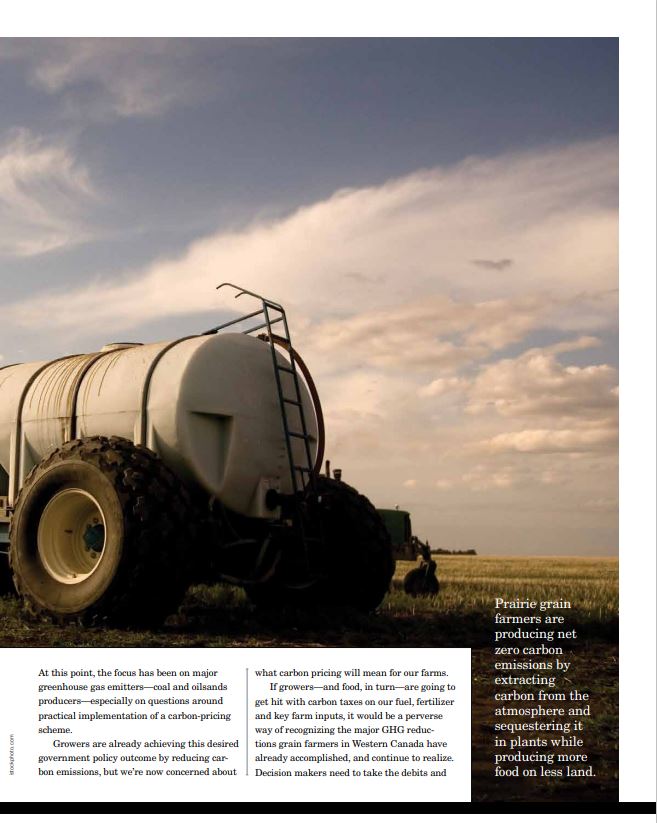 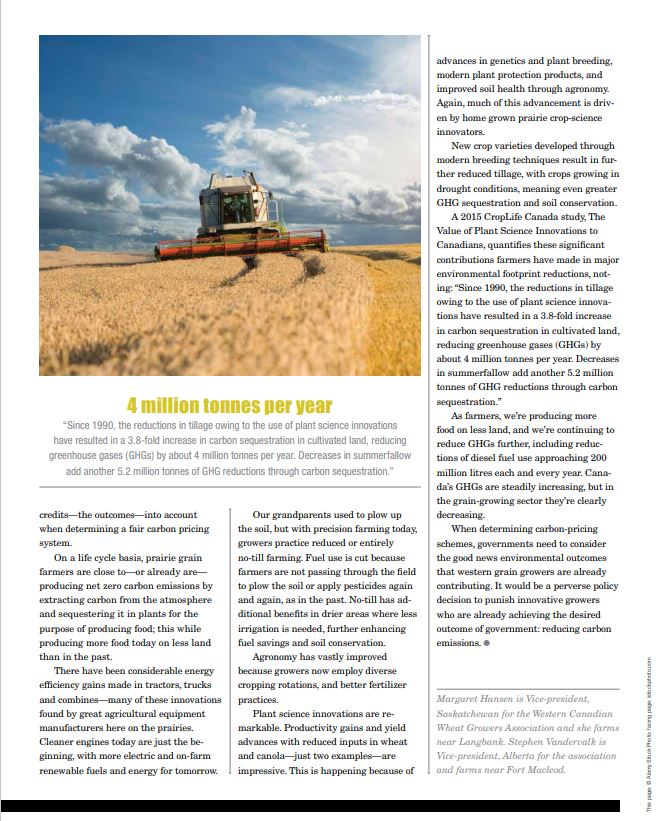