6th tower to come down over the last 2½ years: Hydro

A Manitoba Hydro tower on Bipole III has collapsed, the sixth such collapse in two and a half years.

Hydro says it discovered the newly built tower had collapsed during an inspection of towers on the N4 section of the Bipole line near Overflowing River last Wednesday.

Powell said there was a missing cotter pin on one of the assemblies, which are held up by guy-wires a.k.a tensioned cables. He said that missing pin, along with improper guy-wire tension, allowed a nut to work itself loose during some extremely high winds, which caused the collapse.

He added that the tower had been up for less than 10 days and that the tower's contractor will replace it and pay for the materials needed for a new build.

CBC reported last year that five towers had collapsed in 2017 due to human error. That prompted the union that represents some of Hydro's electrical workers to ask for a full investigation into the matter.

The International Brotherhood of Electrical Workers (IBEW) Local 2034 said it wasn't aware of the latest collapse and has asked Hydro for details.

Powell said tower collapses are rare and said the six that have come down are out of the more than 3,000 that have been built over the last two and a half years.

A spokesperson for Workplace Safety and Health said Rokstad Power notified them, and no workers were on site at the time of the collapse. 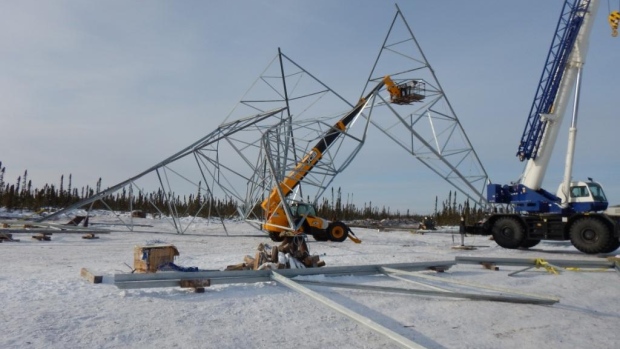