How to Help Pro-Pipeline Indigenous Communities

Is there a better way to answer the question of “stolen land” than giving it back?

In Canada, probably a majority of Indigenous communities support natural resource development and want to participate in major energy infrastructure projects like pipelines.

The Ludwig von Mises institute is the world’s most popular free market think tank, promoting the “Austrian School” of economics and is located in Auburn, Alabama. The president of the institute, Jeff Deist, was formerly Congressman Ron Paul’s chief of staff and is a mergers and acquisitions tax attorney.

Writing on the website mises.org, Deist recently added a novel perspective to the endless debate about fair treatment of Indigenous people in North America.

Deist proposed addressing the “stolen land” issue by abandoning the reservation system and ceding vast tracts of federal land to Indigenous tribes giving them complete sovereignty. Therefore creating “nations within a nation.” Tribes could keep, use, sell, or develop the land as they wished.

This would mean no state or provincial or federal taxes or regulations. Government agencies would have no jurisdiction there at all. Armies of bureaucrats would no longer administer resource rights and land use. The bands would have full ownership and control within their own territory.

We asked Deist to elaborate on these ideas so that we might consider them in relation to our own country’s divided interests, especially about oil and pipelines.

Jeff Deist: Mises elevated self-determination to an ordering principle of liberalism. In other words, without a healthy degree of self-determination, no society can be truly liberal in the right sense of the word. [Indigenous people] in the U.S. and Canada certainly do not enjoy a healthy degree of self-determination, despite all of the political rhetoric. With their relatively small numbers, [Indigenous people] are not a political force either as a voting bloc or lobby, at least at the federal level—so what good is democracy to a tiny minority? Tribal sovereignty—real sovereignty in the Misesean sense, the right to organize politically outside the jurisdiction of any federal, state, or provincial government—should be acknowledged sooner rather than later. Otherwise all the talk about North America as stolen land is empty.

PO: When it comes to Indigenous North Americans, many people understand that there are problems with the status quo. Naturally, conservatives and the left tend to see the issue differently. For example, many conservatives support abolishing the reserve system and having Indigenous people be more like “regular” citizens. The left often sees themselves as the real advocates for Indigenous people, saying they need more fiscal support from the state in order to have more autonomy. Your idea is quite different. Why are your suggestions better?

“What good is democracy to a tiny minority? Tribal sovereignty—real sovereignty in the Misesean sense, the right to organize politically outside the jurisdiction of any federal, state, or provincial government—should be acknowledged sooner rather than later.” –Jeff Deist

JD: Should [Indigenous people] trust the governments of Canada and the U.S.? It's absurd on its face. Tribes should be free to form nations within nations, and those nations can be as connected or disconnected from the rest of North America as those tribes see fit. Certainly, there should be trade, travel, diplomacy, and communication between these tribal nations and the rest of the world, including North America. Certainly, tribal members should have a say in determining the degree of connection and should be granted U.S. and Canadian citizenship to live outside tribal lands as "regular" Americans or Canadians if they choose. And, of course, the tribes themselves should issue passports and control their own borders. It's bizarre to give so much lip service to tribal history, traditions, and practices while simultaneously pushing either assimilation or dependency.

PO: In Canada, a lot of land could be given over to Indigenous people for homesteading and development. Right now, almost 90 per cent of the country is “Crown land”—that is, owned by either federal or provincial governments. Indigenous reserves here are federal Crown land. Surface and subsurface rights to mineral, energy, forest and water resources are largely administered by the government rather than through Indigenous self-governance. Meanwhile, many reserves are very small and remote, making them isolated and weak economically, but the government creates strong incentives for people to stay there. What is the connection between government ownership and impoverishment?

JD: Land was the original form of wealth in North America. The U.S. and Canadian governments own vast tracts of land, some of which could be ceded to tribes without conditions or encumbrances, free and clear. In other words, tribes should truly own tribal lands (even while we acknowledge it may not be easy to trace just boundaries and deserving descendants). They should be able to use that land, including airspace, waterways, forests, subsurface rights, mining rights, and drilling rights as they see fit. They should be able to parcel, subdivide, sell, or borrow against any portion as well. Some tribes might choose to sell land immediately and create funds for education, housing, medical care, and the like. Some might choose to leave important lands completely untouched, never open to outsiders. Ownership means ownership, not simply beneficial use under the watch of federal regulators and overlords.

PO: In Canada, probably a majority of Indigenous communities support natural resource development and want to participate in major energy infrastructure projects like pipelines. These efforts can be restricted by federal law (for example, banning oil tankers in certain areas). But also, many Indigenous groups oppose this kind of industry. The opposition of a small minority can stop a project for everyone else because of how the government makes decisions for such things. How does your proposal address this type of conflict?

JD: Conflicts over land, and land use, are always local. Ottawa and Washington, D.C. are distinctly ill-suited to making decisions over such faraway conflicts. Again, sovereignty means the local tribal members decide whether to engage in industry and resource exploitation or focus on preservation and green projects. After all, it's their property. As for pipelines and infrastructure that may cross into and out of tribal land, the approach is no different than any cross-border project. The various nations and industries involved negotiate, but no tribe should be forced to participate.

PO: Some will say your suggestions are too extreme. What would you say to people who would claim that creating “nations within a nation” would only increase division and create new problems? They might even suggest that increasing sovereignty would only aggravate the issues often associated with reserves— the parallel society approach hasn’t worked out.

JD: Do Indigenous people think total sovereignty is too extreme? Is the current situation working, where many reservations are de facto welfare state wards? Is there a better answer to the question of "stolen land" than giving it back? I suspect many tribes would benefit financially and create a better standard of living for tribal members without too much upheaval. Many might wish to remain closely engaged with the U.S. or Canadian government and accept continued regulation and transfer payments (i.e. welfare becomes foreign aid). Others might become radically independent and create true nations within a nation. But either way, if we believe in self-determination—if we really believe in a liberal ordering of society—we should stop trying to "fix" [Indigenous] problems and simply grant tribes sovereignty and land.

C. Kenneth Reeder is a Calgary financial analyst providing mergers and acquisitions advisory services for midsized, privately held companies in  Western Canada. He works with many clients in the oilfield services sector.  He is also the editor of  canadianmarketreview.com. 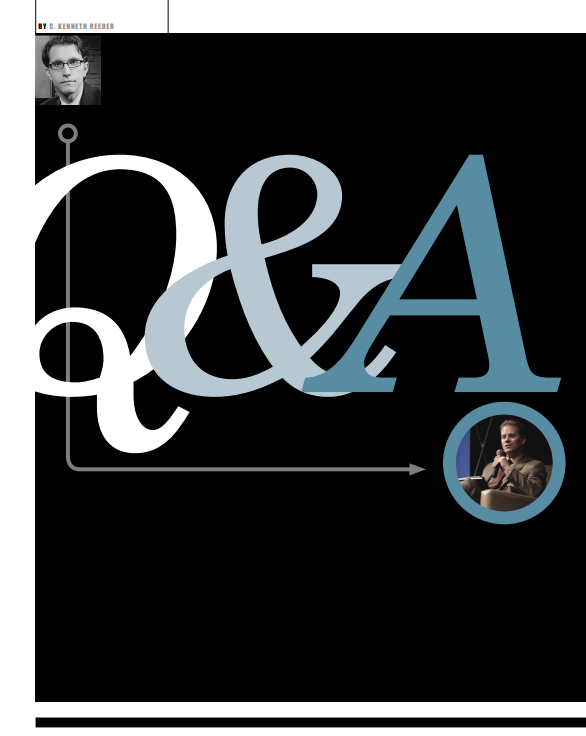 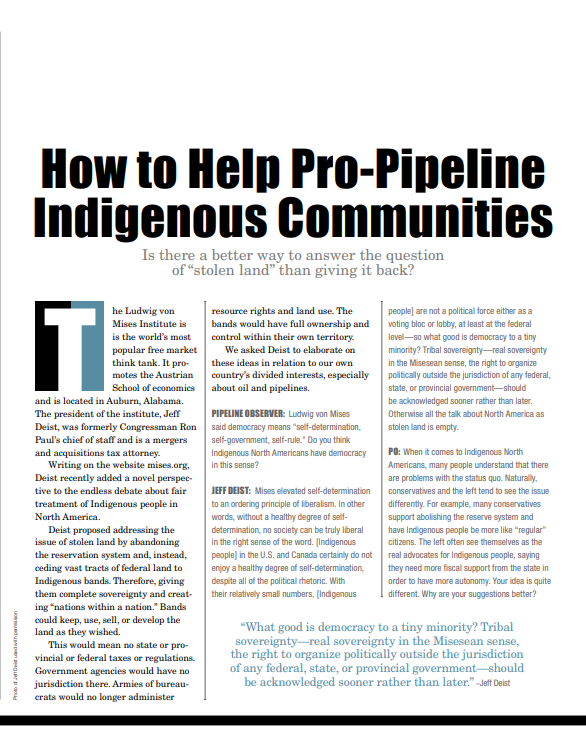 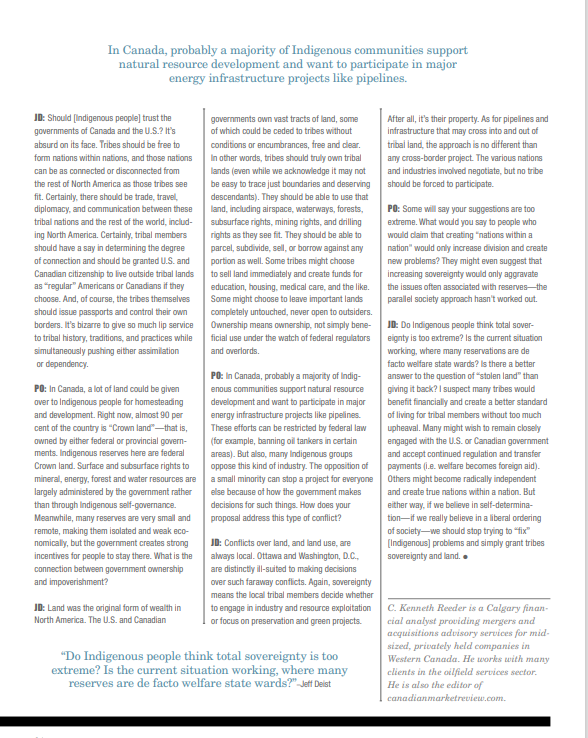