How I Discovered Property Rights

Bringing CAEPLA’s message direct to landowners across the country.

I have been fighting for property rights for most of my life and I didn’t even know it.

I grew up with pipelines on the family farm, and I got used to the fact that the land over the pipelines didn’t grow good crops or, on some land, any crops at all. Where the pipes were, we spent hours as kids picking up rocks, hoeing weeds and later going back and forth with equipment to break up the lumps.

I always asked my dad what he got out of dealing with this mess, and he always said “nothing.”

Later, when the company wanted to put in another pipe, I suggested to my dad that he and my uncle should get a portion of the profits the company made from the pipeline, or at least be paid rent considering the extra work and loss of crop. He told me later that when he mentioned it to company people he was laughed at.

None of this made sense to me but I was still young and did not yet understand the power of government. I could not grasp how this company had the right to cross our land and laugh at us when we asked to be treated fairly and share in the profits they were making off my family’s land.

I had much to learn through many years of experience that I never would be taught in school. At the time I knew my dad owned the land we lived on. He said it was his property. I had never imagined he did not have the right to protect what was his.

Land agents just laughed at us

Unfortunately, he told me, there was nothing that could be done; the government could just force farmers to accept the pipeline through their land. My dad and my uncle were good, law-abiding men and they had no will to fight the law — even if the law was wrong. Dairy farmers back in those days had little time for anything but work, and after the war they felt a patriotic duty to not question government.

I didn’t think much about the pipelines after that, until later, when I had my own farm with the same pipeline corridor on it and the same company wanted to change the easement agreement across that property.

I was as busy then as my dad was back when I was growing up, now with a young family of my own and a livestock farm to run.

The land agent’s knock on the door was just another annoyance and continued to be extremely annoying as the months went by.

So, I went with my dad to an open house. The company was doing its government-mandated expropriation consultation with landowners, whereupon we again suggested sharing in the profit. This time the company guys’ lighthearted dismissal really irritated me but my dad’s reminder on the way home — that the company could get the government to enforce what they wanted — defeated my resolve to just say no.

When the agent later drove in to my laneway, after many visits, I simply became fed up and, between chores, signed his document and bid him a grumpy farewell.

A movement was born…

After the fact, I was enlightened by a neighbour that what I had signed was misrepresented to me. The land agent had lied, and had provided power of attorney over my farm to the company.

Fortunately, a few extraordinary people along that pipeline were making intense efforts to organize landowners. Under the leadership of Stu O’Neil, they formed the Ontario Pipeline Landowners Association (OPLA). This pooling of effort and finances provided us the wherewithal to show that we were lied to and prove the proposed project was unsafe, convincing the National Energy Board (NEB) to turn the project down. It was most embarrassing for the industry.

But most importantly, it motivated a number of us to get educated on the legislation, regulations and mechanisms government can use to take our property, and then either give that property or the use of it to private interests rent-free. If we had not stood up for our rights, that project would have been rubber-stamped and many landowners’ livelihoods would have been lost.

That fight, which began in 1993, coincided with a former minister of agriculture inviting me to get involved politically, specifically in backroom federal politics. This experience enlightened me on the influence lobbyists exert in Ottawa, which results in policies and legislation that compromises real property rights.

My real education had begun. And just as I was becoming disillusioned with politicians and all political parties, Stu O’Neil approached me to take over the presidency of OPLA.

By 2000, a number of landowner groups that had formed as a result of OPLA’s success decided we needed a national organization and formed what is now known as the Canadian Association of Energy and Pipeline Landowner Associations (CAEPLA).• 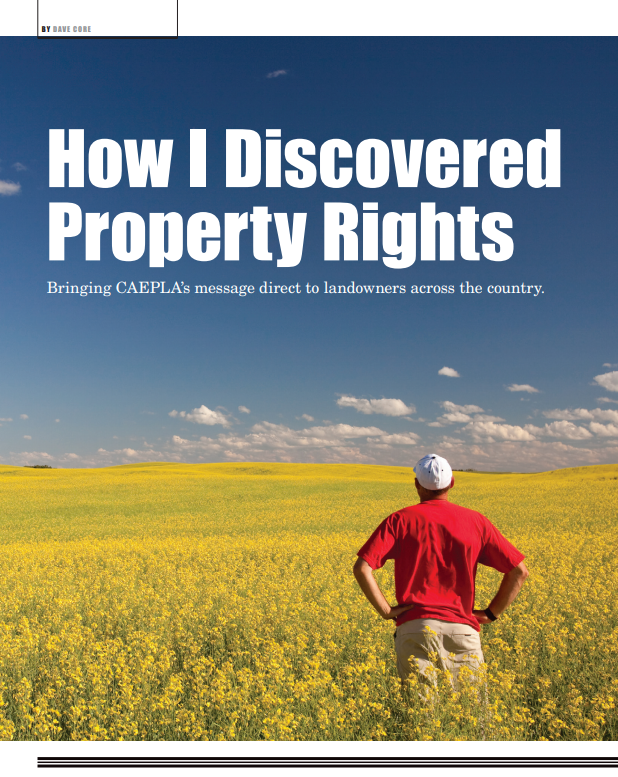 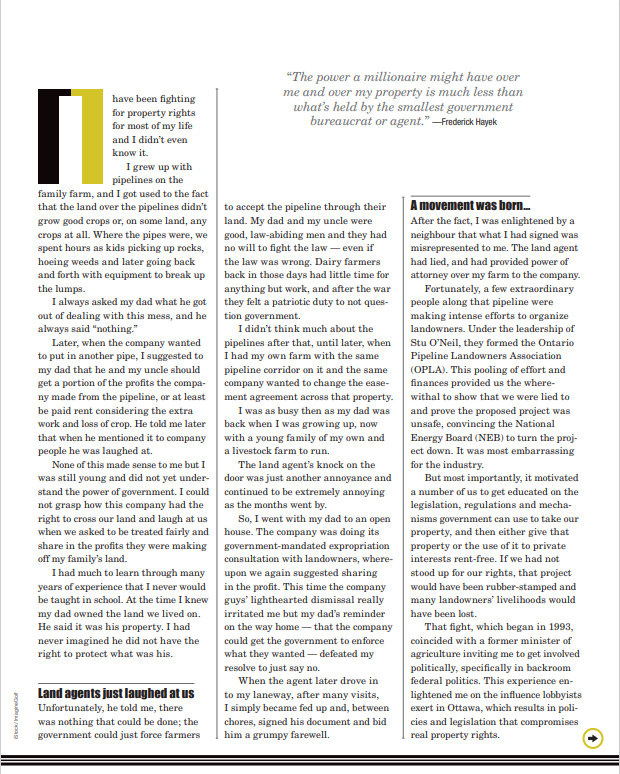 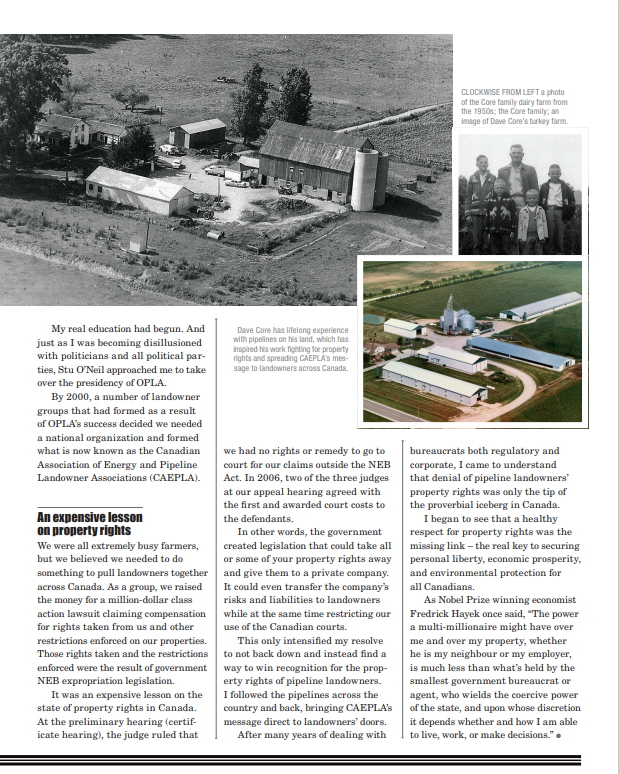