Horizontal Directional Drilling: What You Need To Know

HDD is often the best method for sensitive river crossings

Horizontal Directional Drilling (HDD) is a construction technique in which a tunnel is drilled under a waterway or other area and a pipeline is pulled through it.

The tunnel follows an arc from the entry point, down under the crossing area, and then comes up on the other side. A drill head guides the drilling pipe electronically. This ensures that the angle, depth, and exit point are precise.

During drilling, the tunnel is lubricated with a natural, non-toxic substance that’s roughly 95 per cent water and five per cent bentonite clay. This drilling mud coats the walls of the tunnel and removes drill cuttings.

Once the tunnel is 30 cm (12 inches) wider than the diameter of the pipe, the pipeline segment can be pulled through.

These segments are made of thick steel. They have a first layer of coating to prevent corrosion, and a second scrape-resistant layer to protect the pipe during the pull. The two ends of the segment will then be welded together with the rest of the pipeline system.

An Ideal Method To Reduce Impact

Long-distance underground pipelines are built across open areas, like rural farmland. Construction crews clear a route, dig a trench and lower in the welded sections of pipeline.  After completion, they replace the soil as a restoration process.

This is all done in a way that minimizes environmental and stakeholder impact.

For large rivers or sensitive crossings, directional drilling is often the ideal method. It reduces impact on the area above the drill. And any land around the drill entry and exit will be restored to its pre-drill state.

How Will Directional Drilling Affect You?

Drilling equipment creates noise. Whenever possible, companies such as Enbridge will restrict activity to daylight hours if the equipment is close to occupied buildings. Construction crews reduce noise by using structures that are designed to cut down sound levels.

The drilling time depends on the distance, geology and pipeline diameter. Sometimes, drilling is completed in just a few weeks. Other times it may take months.

There is an estimated completion time for any specific drill site. Timetables can, of course, be affected by surprise conditions.

Pipeline design and construction are regulated by the National Energy Board. Depending on the location, local, provincial or federal permits may be needed.

But What About The Environment?

HDD is used to reduce or avoid environmental impact. Like anything, HDD is not 100 per cent risk-free.

Normally, the drilling mud stays in the tunnel, and around entry and exit points. The mud can sometimes surface elsewhere through natural cracks. This unplanned release is called "inadvertent return."

Highly trained technicians use advanced monitoring equipment to watch for potential problems. Often, the drilling mud will itself seal a hole, preventing and minimizing seepage.

If a certain amount of mud surfaces outside the drilling area, Enbridge will suspend work and perform full cleanup and containment. If the mud enters a waterway, it is usually diluted by the river (being only five per cent bentonite) so that no active cleanup is necessary. Still, Enbridge works directly with the proper environmental agencies throughout the drilling operation.

In rare situations, directional drilling attempts may not be successful. Enbridge will then propose and seek permits for alternative ways to cross the area. No matter the method, the company observes environmental protection measures and consults the appropriate agencies. 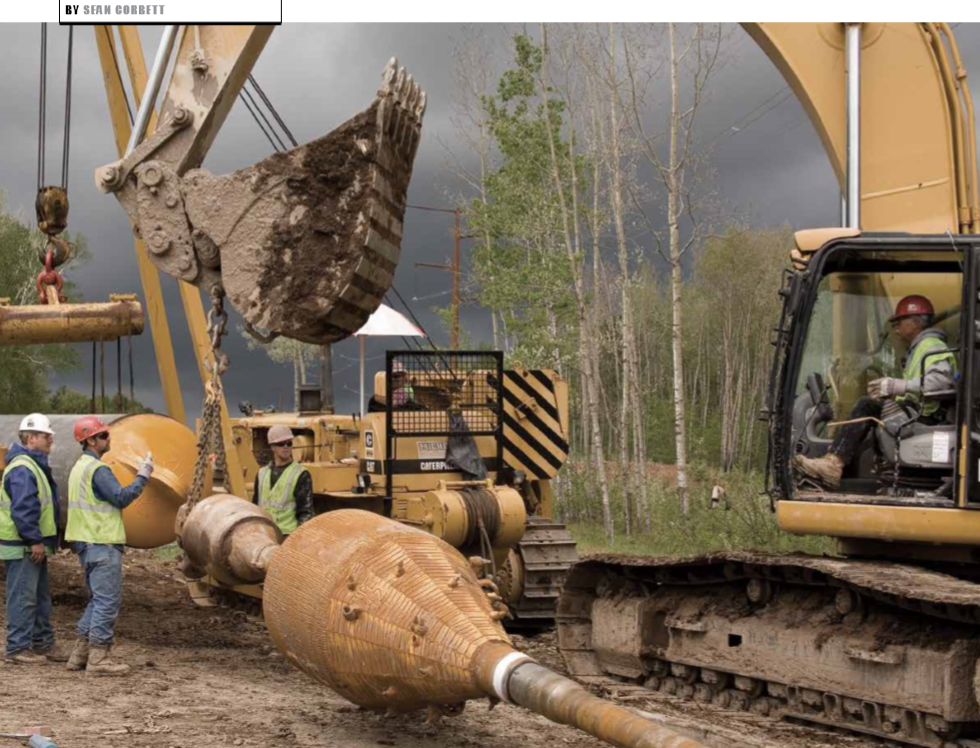