CAEPLA has been hard at work advocating for the resident landowners around Hope whose lives have been disrupted by the new Crown Corporation mismanagement of the Trans Mountain expansion project.

Chief among the issues CAEPLA is working on are a variety of quality of life impacts, as well as the undermining of local property values by TMX construction.

Of note in this article is that the government will be opening a "licensed lounge" for the hundreds of workers involved with the project, even during the Covid crisis where such facilities have been locked down or severely restricted. 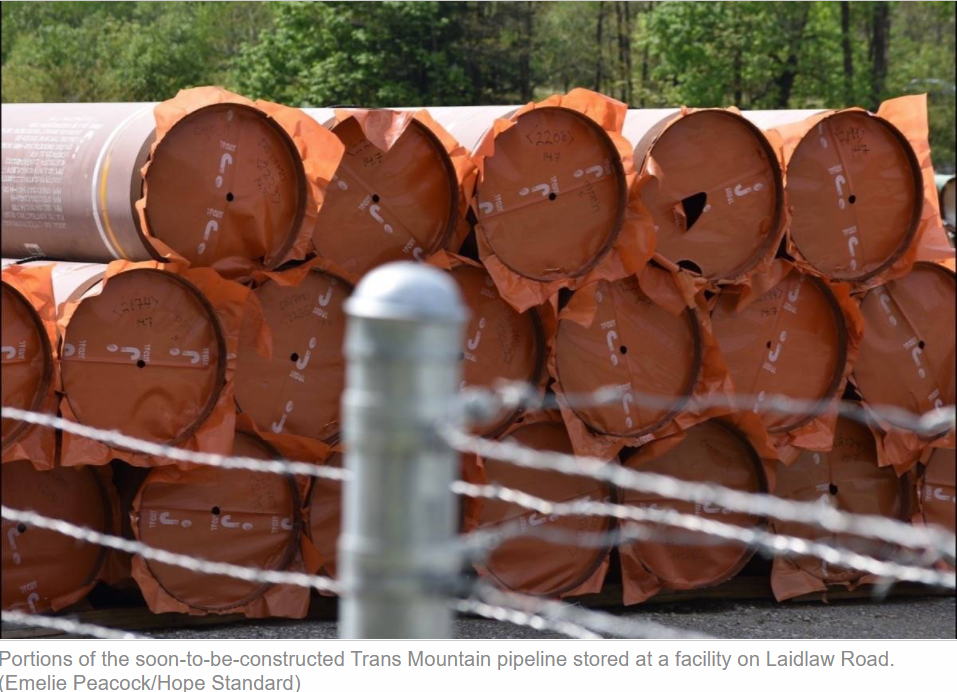 With over 100 people in the Hope region already working on the twinning of the Trans Mountain pipeline, the project team shared a construction update with the public Nov. 12.

Construction remains on track on the pipeline twinning project, the team said in a public phone-in session Thursday, which will increase the capacity to transport diluted bitumen from 300,000 barrels per day to 890,000. Around 19 per cent of the twinning project is complete and the new pipe should be in service by the end of 2022. The phone-in session lasted for 40 minutes, with space for two residents to ask questions.

Hope is in the middle of section 5B from Coquihalla Summit to Wahleach near Bridal Veil Falls, which senior community liaison Kate Stebbings said has “exceptional terrain and engineering challenges.”

Clearing, grading and blasting is ongoing in the Coquihalla Summit area. When winter conditions make work in the area impossible, crews will move into the upper Fraser Valley to do the same work. When exactly this work will start in Hope is weather dependent, but could be around January or February 2021.

This phase is expected to be finished in the spring of 2021, with the pipe laying starting after this and lasting for around a year.

Director of Lower Mainland execution with the company Dean Palin said around 1.3 million cubic metres of rock will need to be blasted, over 24 kilometres of terrain. “A lot of this is close to highways, waterways, existing facilities and geohazard areas,” he said. Navigating this will include using trenchless crossings, crossings over waterways and tunnels in steep geohazard areas. In areas where the pipe crosses under railroad tracks in Hope, the construction involves boring under the tracks. “The tracks are not affected at all because you go a little bit deeper underneath the tracks,” Palin said.

He added that mitigation plans are in place to deal with noise, dust, construction light and traffic, measures that are currently being used in the Laidlaw Road area.

In September 2020 there were an average of 110 workers on site daily, with 30 per cent local and/or Indigenous workers. Contractors are the ones doing the majority of the hiring locally –Macro Spiecapag Joint Venture in the Hope area – and local workers are given priority the team emphasized.

Workers looking for work should either be applying to the contractor directly or signing up at Trans Mountain’s jobs registry at transmountain.com/jobs.

Over $4.8 million has been spent on subcontracts in the region so far, with all but two of the subcontracts awarded to Indigenous or local companies. The two exceptions were highly specialized services not available locally Stebbings said.

The Laidlaw and Popkum areas are seeing increased activity including a pipe storage site in Laidlaw, a worker camp on Shxw’owhamel First Nation land in Laidlaw and a construction site at Popkum. “The Laidlaw site includes a stockpile yard and offices for 60 people,” she said, adding that pipes had been stored in that yard since November 2018.

The camp, constructed by the first nation with LandSea camp services, is set to house 350 people with workers moving in before the end of the year Stebbings said.

The site is self sufficient said president of LandSea Mike Coyne. It is connected to hydro, has its own water well and water treatment capability, sewage treatment and internet services “so we don’t impact local residents.”

In addition to facilities like a kitchen and licensed lounge, health services will be on site including a clinic with a registered nurse “supported by emergency and family physicians through telemedicine” in order to limit the use of local healthcare resources Coyne said. Workers with advanced care needs will be transferred to the Fraser Canyon Hospital. Confidential addictions services will also be provided on-site.

Ensuring all of these services are available at the camp will help prevent a draw on community services and infrastructure by the temporary workforce, socioeconomic lead Susan Dowse said, and make sure those staying at the camp have a positive experience.

There will be a worker code of conduct applied to all workers, even when off work, and camp rules such as no unauthorized visitors, no alcohol permitted except at the licensed lounge, and zero tolerance for drugs including cannabis, harassment and violence.

Twenty four hour security, run by a local Indigenous contractor, includes “guards at the perimeter, access control and contraband detection,” said socioeconomic lead Susan Dowse. A confidential phone line will be in operation, she added, for reporting any concerns surrounding the camp.

Contractors working at the two sites have been instructed to restrict their use of Laidlaw Road and to use the exit onto Highway 1 nearest the respective site to travel out from. “This direction minimizes traffic in the middle of Laidlaw Road and minimizes disruption to the residents,” Stebbings said, after concerns were raised by area residents.

Do you have something to add to this story, or something else we should report on? Email:[email protected]