Not all aboriginal communities oppose energy and economic development

Whenever I attend a performance of the Calgary Philharmonic Orchestra, it is an intensely civic experience as well as a cultural and aesthetic one. The last concert I attended, I recall an announcement being made at the outset acknowledging the traditional First Nation land on which the performance was taking place. Flipping through the program, concertgoers can peruse the logos of the various energy companies who have sponsored the event.

And so, a westerner might naturally contemplate during a classical concert how First Nations property rights are intersecting with energy industry and the government’s regulatory regime today.

Oddly, First Nations citizens are commonly treated as a single, homogenous stakeholder group. But of course, First Nations people do not share all the same opinions and interests when it comes to property rights and natural resource development.

In a 2016 report, First Nations Engagement in the Energy Sector in Western Canada, historian Ken Coates said: “Canada struggles to reconcile these two apparently contradictory realities. On the one hand, the natural resource sector is the largest employer of highly paid First Nations workers in the country. [It] has supported a dramatic expansion of Indigenous entrepreneurship and has empowered dozens of First Nations communities through major financial and engagement agreements.

“At the same time, pipelines and the complexities of petroleum exploration and development have created numerous flashpoints and conflicts between Aboriginal communities, companies and governments.”

A plurality of opinions

Oddly, First Nations citizens are commonly treated as a single, homogenous stakeholder group. But of course, First Nations people do not share all the same opinions and interests when it comes to property rights and natural resource development.

Supposing that anyone speaks for or represents “the First Nations community” is insincere. There are proponents and opponents of each project on all sides. Pretending otherwise for the attempted purpose of simplifying the issues is dehumanizing, and disregards the plurality of opinions common among any plurality of individuals.

“Once an application is filed, Aboriginal groups who have a concern about the proposed application are encouraged to participate directly in the NEB proceedings and bring all relevant concerns forward.”

Not as exciting as a blockade

Noted Coates: “A joint venture is not as exciting as a blockade, so we don’t hear about them because we all know conflict generates more media interest.”

Yet, there is much to be learned from some exemplars—First Nations communities who stand their ground, defend their property and their interests, do business as equal partners, and reap the economic benefits of participation in an industry on which we all depend.

Fort McKay has long been touted as a success story in this regard. The Fort McKay Group of Companies in northern Alberta is fully owned by the band. With more than 4,000 employees, $700 million in annual revenue and First Nation leadership, Fort McKay is a serious player in the energy sector and an example of what First Nation responsibility for land, business and legal negotiating looks like in practice.

The whole purported purpose of regulation and consultation in the energy sector in Canada is to create a framework for action so that the needs of all can be met—while the rights of all are respected.

Some First Nations communities will choose blockades and protests against every pipeline project and, to some extent, that’s their prerogative. But others will choose to eliminate unemployment, promote high-income job opportunities, play by the rules, respect property rights and the rule of law and ensure a prosperous future for the rising generation—one that is dependent on participation in the community’s economy rather than on every level of government.

In the same way a classical concert fixes everyone’s attention on what is best and sublime, it is worthwhile to seek out the creative and noble examples of First Nations people who excel at reconciling their traditional culture with the modern economy. In Western Canada, there are notable pockets of harmony between Indigenous people and the natural resource sector. It would be music to our ears if the rest of the country started to focus on the conditions that make it so.

Calgary writer Amanda Achtman holds an MA in philosophy and a BA in political science. She has participated in seminars on economics and the free society hosted by numerous organizations including the Acton Institute, Mises Institute and the Foundation for Economic Education. 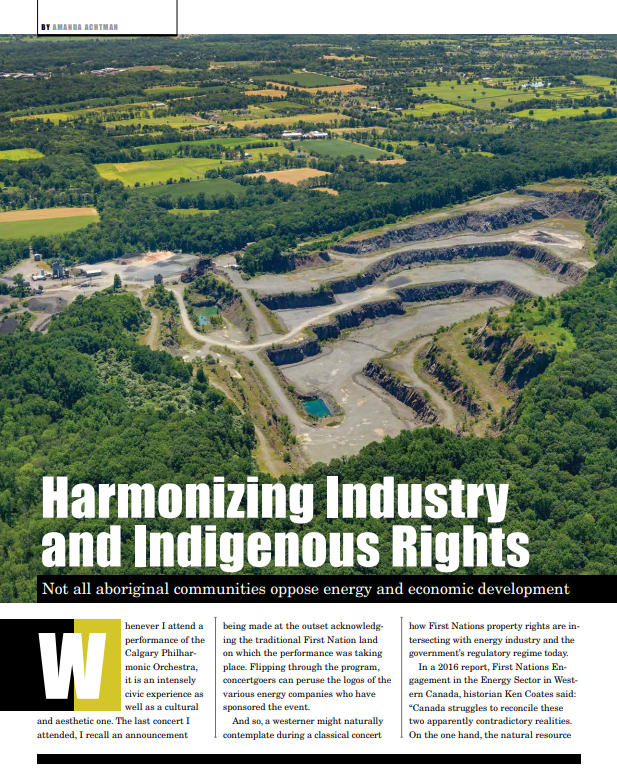 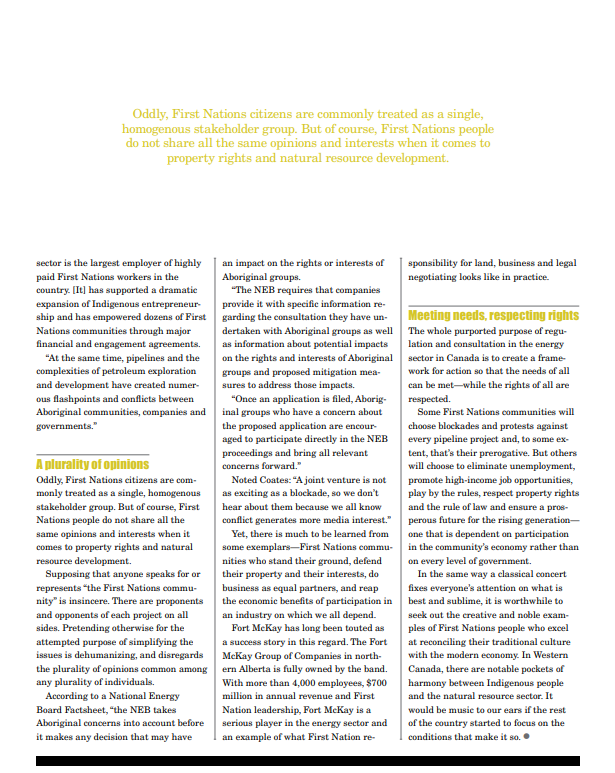