The Government of Canada is continuing its erosion of property rights and our ability to protect our property with its latest ban.

“Protection of the individual and their property is the basis of civilized society. You don’t get to expropriate someone’s property or ban them from owning property because you don’t approve of that property.”

Considering all that Ottawa has done to all but ban pipelines, I suppose we should not be surprised they are now banning another kind of pipe – the ballistic energy transport devices known as guns.

I grew up on a farm in a relatively remote area in northern Alberta. Guns were a necessary tool on the farm. We didn’t just use them to harvest meat during hunting season. We used them to protect our property.

A gun is both a piece of property and a tool used to protect property.

The latest Government of Canada gun ban is an erosion of property rights in two ways. It is an arbitrary ban on property that looks a certain way, and it is a ban on specific tools used to defend property.

A gun is also a legal tool. All laws, regulations and government orders are mandatory because they are enforced by people with guns. If you disobey and resist law enforcement, guns are the ultimate guarantor that you will stop breaking government rules. So, bans on owning certain types of property are essentially threats of state gun violence.

We don’t see the state’s gun very often because the threat of the gun is more than enough to make us comply. So, it is easy for most of us to forget that when we demand the government “do something” we are demanding that they use threats of violence on our behalf. We have outsourced the protection of our life and property to the state and, recent events notwithstanding, we don’t normally get to see how the sausage is made. This is partly why there is a clear rural/urban divide when it comes to the issue of gun ownership.

Luckily these types of scolds and Nanny State devotees (now also known on social media as “Karens”) don’t face the threat of running into a bear at the water cooler. They take for granted that there are people with guns (police officers) all over the city using force to protect life and property. If bands of marauding wild pigs or looting trespassers were a regular threat in these Nervous Nellies’ office buildings or homes they might think twice about supporting gun bans.

Ironically, when one of these perpetually high-anxiety individuals demands a gun ban to end gun violence, they are demanding armed men use their guns to disarm peaceful property owners.

Some gun ban proponents utter the refrain, “Nobody needs a semi-automatic gun!” None of these proponents have had a herd of wild pigs destroying their means to survive and thrive. If they did, they would understand why you might need to fire a few shots in rapid succession for protection. Many gun prohibitionists don’t even realize that the gun ban doesn’t even specifically ban semi-automatic guns, or specific calibres, or centre-fire carbine rifles, it just bans guns that look nefarious.

Certainly, it is legitimate to own property that can be used for hunting and protection, even if the guns look scary to “Karen” — but what about owning property for other purposes like entertainment, hobby collection or sport? The gun ban has essentially killed sport shooting competition in Canada, for example.

Protection of the individual and their property is the basis of civilized society. You don’t get to confiscate — expropriate — someone’s property or ban them from owning property because you don’t approve of that property. I have the right to own property, no matter your opinion, for any reason I want. Period.

Tim Moen is a paramedic, writer and entrepreneur. Tim grew up on a farm in northern Alberta and became leader of the Libertarian Party of Canada in 2014. He has made regular appearances on FOX News and the pages of the Huffington Post and the Post Millenial. 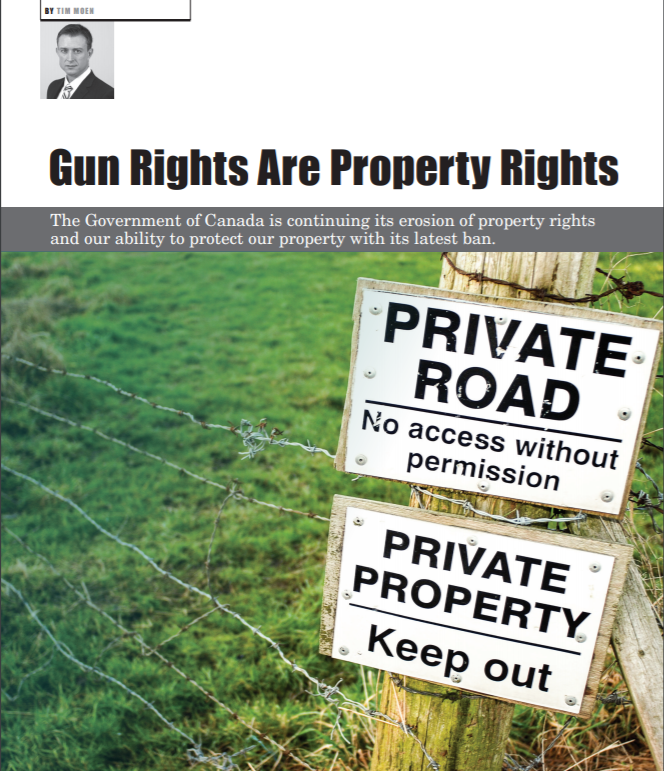