The Manitoba Bipole III Landowners Committee bought the ad, saying it is frustrated by the government’s total silence 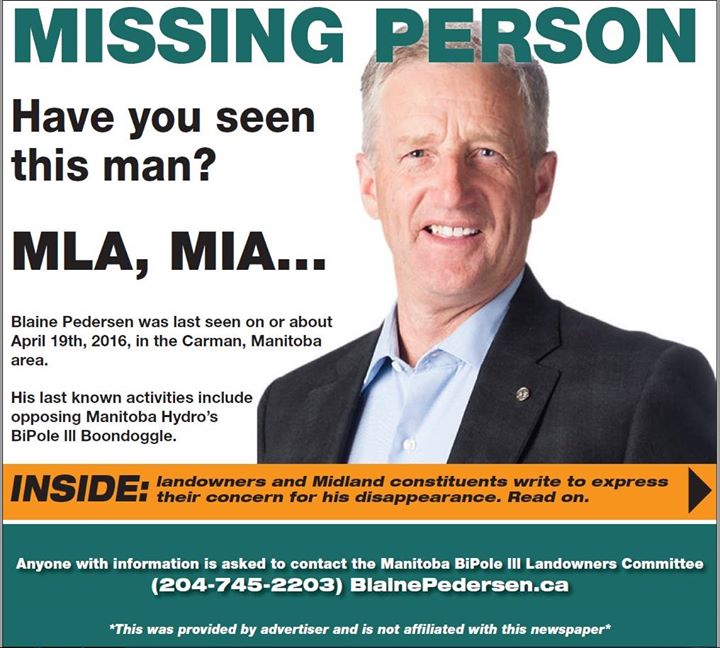 A farmers’ organization affected by the route of Bipole III on their land say they haven’t heard from MLA Blaine Pedersen since his election last spring.

At least that’s according to a full-page advertisement running this week on the cover of the Carman-based Valley Leader newspaper.

Local landowners affected by Bipole III paid for it, saying they’re frustrated the Progressive Conservative government has been unresponsive since their election last spring.

The ad states Pedersen (PC-Midland), who is their MLA, is a missing person not been heard from since his re-election, and “his last known activities including opposing Manitoba’s Bipole III boondoggle.”

The ad which wraps around the front and back of the paper, includes a full-page open letter addressed to the Midland MLA declaring his “silence on the matter “deafening these last nine months.”

They did this to get Pedersen and the provincial government to keep its promise to bring Manitoba Hydro to the bargaining table to get a fair business agreement with affected farmers, said Jurgen Kohler, a Brunkild-area farmer and chair of the Manitoba Bipole III Landowners Committee that paid for the ad.

Following a review last spring the new PC government said it could not reroute the hotly contested power line.

“But they (the government) also told us that they would make sure at the very least that we would have a fair voice at the table and we’d get to negotiate in good faith with Manitoba Hydro and that they’d hold Hydro to that,” Kohler said.

Their 40-member committee has numerous outstanding issues, from liability to biosecurity issues that will come with others having access to their land, that need to be negotiated, he said.

“And none of that has happened to this point.”

It’s out of sheer frustration, having heard nothing from Pedersen nor Premier Pallister as they’ve continued to press for this, that prompted them to take out the ad, he said.

Pedersen was instrumental in helping their group form, and urged them to join with the Canadian Association of Energy and Pipeline Landowner Associations (CAEPLA) to fight for their property rights, he added.

The letter says, ‘we are writing to express our disappointment and sense of betrayal at your abandonment of our fight since winning the election last spring.’

The funds to pay for the ad come from what they called a Pallister Accountability Fund which began accepting donations last fall.

They created the fund last fall as it started to worry them the government might just start to ignore the issue, Kohler said.

“You are seeing the first product (the ad) of the Pallister Accountability Fund,” he said.

“We know on Thursday in the stand in front of the post office (in Carman) it was off,” said Kohler. “That’s extremely frustrating. It’s unbelievable.”

“This is an emotional issue and I respect the rights of these landowners to express their continued disappointment in the NDP’s decision to route Bipole III down the west side of the province.

“My duties as an elected member of the legislative assembly are first and foremost to my constituents, who I will continue to serve and ensure that their concerns are heard by the applicable ministry.”