Will They Ever Reconcile with Non Indigenous Landowners?

Why have farmers, ranchers and other non First Nations landowners never been offered equity in the pipelines that cross their property?

Enbridge has been on a journey of Reconciliation when it comes to engagement with Canada’s Indigenous Peoples. And it aims to go further.

The energy infrastructure company, which employs more than 12,000 people across Canada and the United States, has embarked on a stage of its Reconciliation journey that is arguably the most meaningful in Enbridge’s long history.

“Some of our businesses have been around for more than 100 years, but it’s really in the last decade where we’ve made significant progress with Indigenous engagement,” says Colin Gruending, president of liquid pipelines at Enbridge Inc. in Calgary.

Headquartered in Calgary, Enbridge operates oil and gas pipelines, a natural gas utility and a diverse portfolio of renewable energy projects, and has long consulted with Indigenous groups on projects to ensure they benefit economically.

Yet, only recently have Enbridge and Indigenous partners invested alongside each other in major energy infrastructure projects.

“As partners, these Indigenous groups are also owners with a voice in the projects and alignment in goals,” Gruending says. “This is very powerful for them economically and socially.”

He points to one partnership — the Athabasca Indigenous Investments Partnership — worth more than $1 billion, in which 23 First Nation and Métis groups have an equity stake in Enbridge’s Athabasca oil pipeline network in northern Alberta.

“The other unique part is that most energy infrastructure projects have an inherent environmental stewardship piece, with Indigenous communities often uniquely positioned to provide high-value advice to help optimize the footprint on the land.”

Other recent partnerships include a carbon sequestration project in Alberta, in which Indigenous partners have potentially a 50 per cent equity stake.

This follows advancements made between Enbridge and Indigenous communities on the Line 3 replacement project, the largest in Enbridge’s history.

On that project, Enbridge worked with 98 Indigenous communities in Canada and the U.S. on economic benefits related to construction of the line, which transports oil from Edmonton to Superior, Wisc., and went into service last year. These benefits included training, environmental stewardship and construction work on Line 3 that totalled almost $1 billion.

“It’s one of the first initiatives of its kind among energy infrastructure companies,” Gruending notes.

Still, much more remains to be done as Enbridge’s over 300,000 kilometres of pipeline and other infrastructure intersects with 250 Indigenous communities.

“These are relationships that make us neighbours for a long time, so it only makes sense to become increasingly engaged as economic partners.” 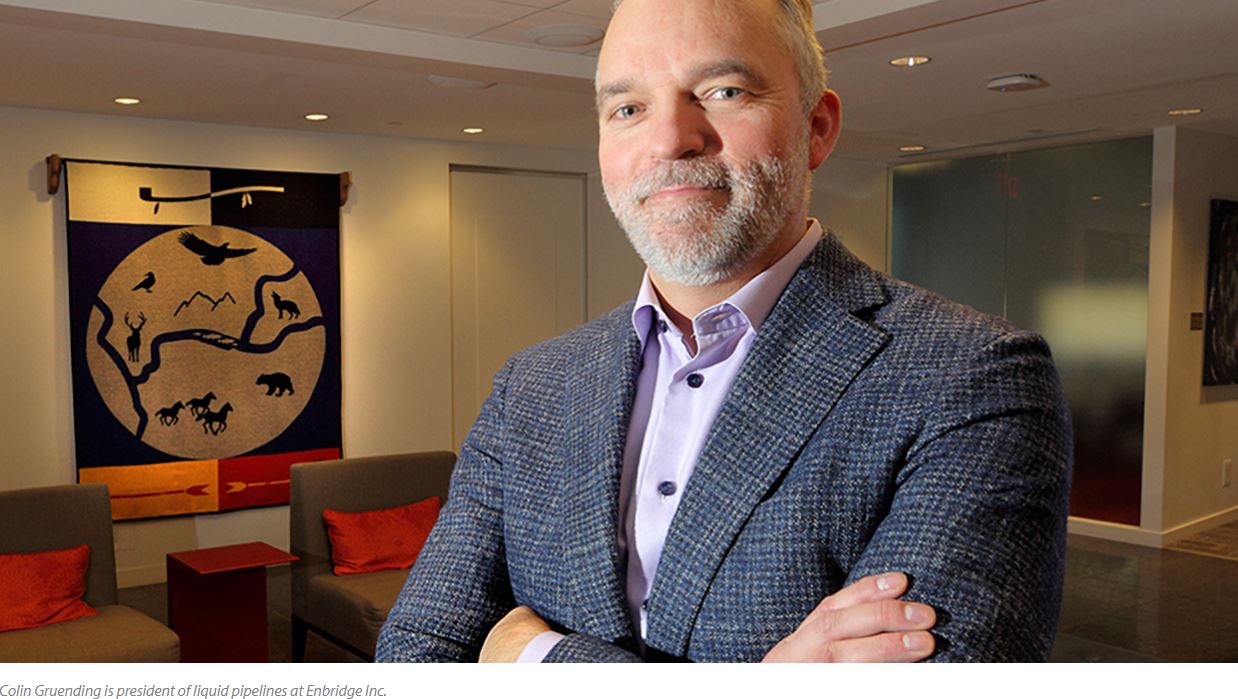