The Federal Court of Appeal says it will hear six challenges of the Trans Mountain pipeline expansion focusing on Indigenous consultation, while dismissing several claims centred on environmental concerns.

The decision calls for narrowly focused, expedited court proceedings that will only examine the calibre of the federal government’s consultations with Indigenous communities between August 2018 and June 2019.

“Many of the Indigenous and First Nation applicants now allege that the poor quality and hurried nature of this further consultation rendered it inadequate,” Justice David Stratas wrote in the decision released Wednesday.

The government of Prime Minister Justin Trudeau has twice approved a plan to triple the capacity of an existing pipeline from Alberta’s oilpatch to an ocean terminal in Burnaby.

The Federal Court of Appeal tore up the original approval last year, citing both an insufficient environmental review and inadequate Indigenous consultations. The Liberals said they fixed both problems and approved the expansion a second time in June.

Three environmental groups, eight First Nations and the City of Vancouver sought leave to appeal. Conservation groups argued there were inadequate protections for endangered species affected by increased tanker traffic, while several First Nations said the government came into the most recent discussions having predetermined the outcome.

The court has allowed requests to appeal by the Coldwater Indian Band, the Squamish Nation, the Tsleil-Waututh Nation, the Upper Nicola Band, the Stk’emlupsemc Te Secwepemc and a coalition of First Nations in B.C.’s Fraser Valley.

Stratas explains in his ruling that decisions to grant leave to appeal are based on whether arguments are “fairly arguable,” meaning any claims with fatal legal errors must be dismissed.

Two sets of arguments advanced by First Nations didn’t meet that standard, including any assertions of a right to veto as well as issues already decided by the court’s first ruling last August, Stratas says.

However, the federal government engaged in additional consultations after the first ruling and the court should decide whether those talks were adequate, he says.

But Stratas says applicants’ arguments on environmental issues aren’t fairly arguable. Many were already dealt with or could have been raised during the court’s first hearing on the project, he says.

In its first ruling, the court called for a new National Energy Board review focusing on marine effects and the review was completed in February. The board submitted a “comprehensive, detail-laden, 678-page report” to the government, Stratas notes.

Though many applicants say the new report is deeply flawed, this legal argument “cannot possibly succeed” based on the degree of examination and study of marine shipping and related environmental issues in the document, he says.

The federal government bought the existing pipeline and the unfinished expansion work for $4.5 billion last year, promising to get it past the political opposition that had scared off Kinder Morgan Canada from proceeding.

Stratas rejected arguments that alleged the government made a biased decision to approve the project because it is the owner.

Stratas says short and strict deadlines for litigation will be set. He directed the parties to file their notices of application for judicial review within seven days.

The Tsleil-Waututh Nation said in a statement that it felt confident the government’s approval will once again be quashed.

“Canada continued to do the legal minimum and in our view, fell well below the mark again,” Chief Leah George-Wilson said of the consultations. “They approached it with a closed mind, and were in a conflict of interest.”

Ecojustice, which had brought a case on behalf of Raincoast Conservation Foundation and Living Oceans Society, said it will not rule out taking its fight to the Supreme Court of Canada.

“Going to the country’s highest court may seem like a drastic measure, but — in the midst of a climate emergency and biodiversity crisis — these are drastic times,” it said.

The City of Vancouver also said it’s considering its next steps.

Alexandre Deslongchamps, a spokesman for Natural Resources Minister Amarjeet Sohi, said the federal government is confident it took the necessary steps to get the approval right and is prepared to defend its decision in court.

“We fulfilled our duty to consult with Indigenous communities by engaging in meaningful, two-way dialogue, which allowed us to co-develop eight new accommodation measures that are responsive to the concerns raised,” he said.

Conservative MP Michelle Rempel criticized the government for not submitting a defence against 11 of the 12 motions seeking leave to appeal. The court decision says the government did so because it considered the threshold for leave to be quite low.

“Today we found out Justin Trudeau rolled over and refused to stand up for the Trans Mountain pipeline in court,” Rempel said. 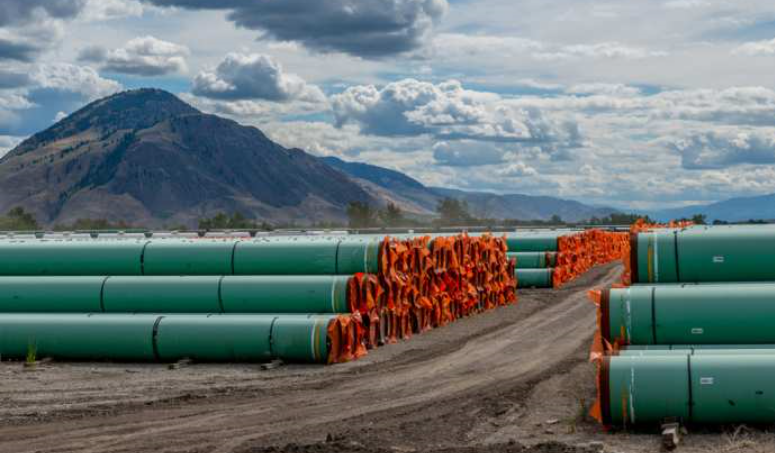