Farmers protest the use of eminent domain to take their land

The Real Reason to Oppose the Dakota Access Pipeline

“People who lose their property to eminent domain proceedings are almost never made whole.”

The ongoing protest over the Dakota Access Pipeline near Standing Rock Indian Reservation in North Dakota makes for some good theatre, but the protesters have as yet been unable to demonstrate that the pipeline actually trespasses on Indian lands, or that it will likely lead to groundwater pollution.

Both trespassing and water pollution are serious issues that would rightly open up the owners — in this case, Energy Transfer Partners — to crippling lawsuits.

In North Dakota, however, the pipeline passes through private property and a likelihood of groundwater pollution has not been established.

Defenders of the pipeline like to point all this out. But, those same defenders also conveniently ignore that other parts of the pipeline, including parts that pass through Iowa, rely on eminent domain (known in Canada as expropriation) to secure land rights for the pipeline owners.

Eminent domain was used in other portions of the route in Iowa, prompting farmers to sue the Iowa Utilities Board (IUB) in an effort to prevent the company from gaining the right to use the property-seizing tool. A judge eventually allowed the DAPL use of the land.

In May 2016, farmers began suing the pipeline developers in an effort to prevent the use of eminent domain to seize private property for the benefit of the pipeline owners. There are 1,295 properties along the 557-km route through Iowa.

As of November 2016, the owners of 17 parcels had sued over the fact that the State of Iowa handed over 200 pieces of land under eminent domain laws.

In October, according to farmer Cyndi Coppola, pipeline developers trespassed on her farm in Calhoun County, Iowa, and began digging up the topsoil for pipeline construction. Coppola was arrested on her own property for protesting the dig.

In spite of the blatant violation to private property that eminent domain presents, many conservative politicians — the same ones who claim to support property rights — also support eminent domain. Indeed, during the Republican debates last year, candidates expressed unwavering support for eminent domain when pressed on the topic of oil pipelines.

During the Republican debate, Jeb Bush attempted to differentiate his support for eminent domain from Donald Trump’s support. Bush wrongly claimed that the Keystone Pipeline — which also relies on eminent domain — is for public use, when the pipeline is privately owned and built to profit its owners. Trump exposed Bush’s deception, in the process essentially demonstrating that both candidates favoured the seizure of private land for someone else’s private use.

The situation is no different with the Dakota Access Pipeline in Iowa. The Iowa government is attempting to seize private land and hand it over to other private owners because to do so is convenient for the pipeline owners and their supporters in government.

Nevertheless, defenders of the pipeline’s trespassing are likely to maintain that violations of property rights such as this are acceptable because the former owners receive “just compensation.”

In cases like this, supporters of eminent domain like to throw around a lot of fancy terms like “highest and best use” in order to obscure the core issues at hand. But these terms do not erase the fact that if the owner were willing to sell for the price offered, then government coercion would not be necessary to seize the land.

In the market, any compensation that is voluntarily agreed upon by both parties to a transaction is properly seen as just. If buyer and seller or employer and employee are both willing to make a deal, their freedom to do so, at any mutually agreeable price, is the fulfillment of justice in the world of economic exchange....

The state, unlike market participants, does not make its transactions through voluntary persuasion and bargaining, but through violence and the threat of violence. Certainly in the case of Eminent Domain — which means “supreme lordship” — we see that the victims of seized assets have never consented, otherwise a pure exchange could take place that requires no police power. No such coerced transaction can be said to entail “just compensation,” since compensation is only just when the party being compensated agrees to the deal.

It is only through such a voluntary transaction that we can determine what something’s market value is in the first place. Market value is not universal, but particular to the assets exchanged in a specific transaction. For any given piece of property, there can be no market value without market exchange.

When the state has to rely on the coercive power of Eminent Domain, it is a sure sign that the property owner is not being given something he values more in exchange for something he values less, and it is a perversion of language to describe the compensation, however high, as having anything to do with the market.

But, don’t expect this to stop builders and developers who fancy themselves as paragons of civilization who merely need to sweep aside the hicks and rubes who get in the way of “progress.” President Trump has even gone so far as to claim that owners of seized property “at least get fair market value, and if they’re smart, they’ll get two or three times the value of their property.”

At least one study has shown, however, that this is not true at all, and “people who lose their property to eminent domain proceedings are almost never made whole.”

This is just a long-winded way of saying “without government, who will build the roads?”

Ryan McMaken is the editor of Mises Wire and The Austrian. He is the author of Commie Cowboys: The Bourgeoisie and the Nation-State in the Western Genre. 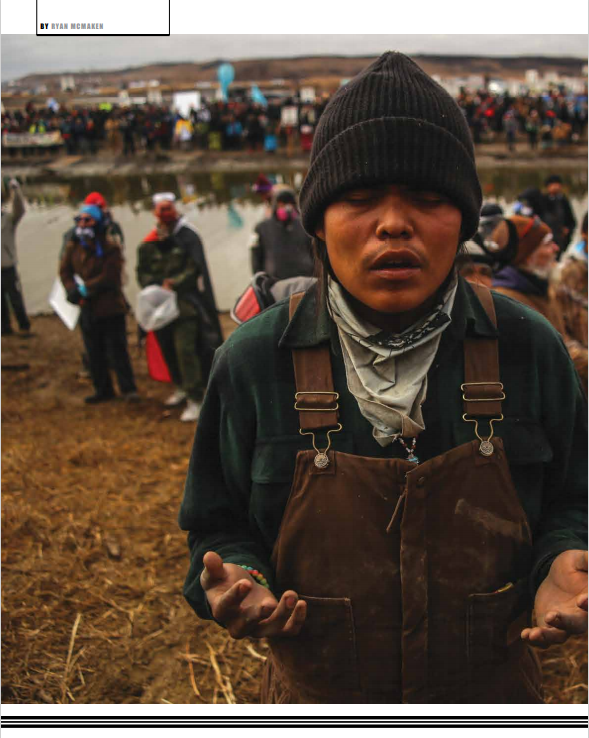 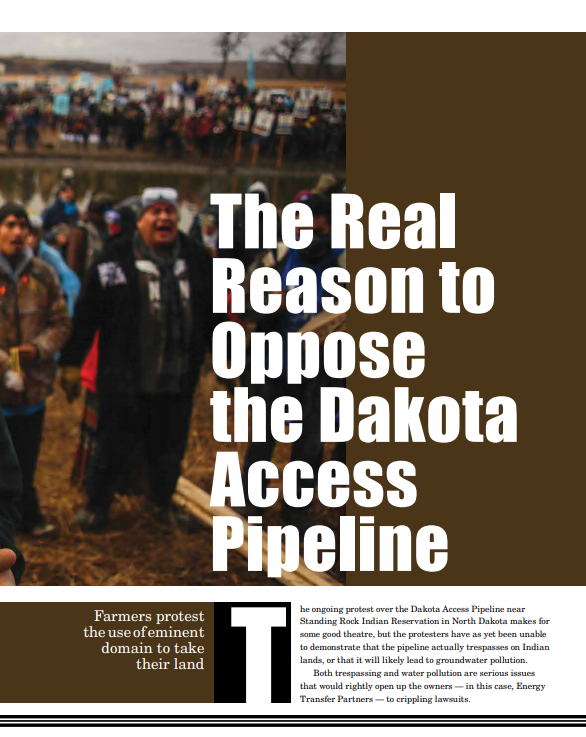 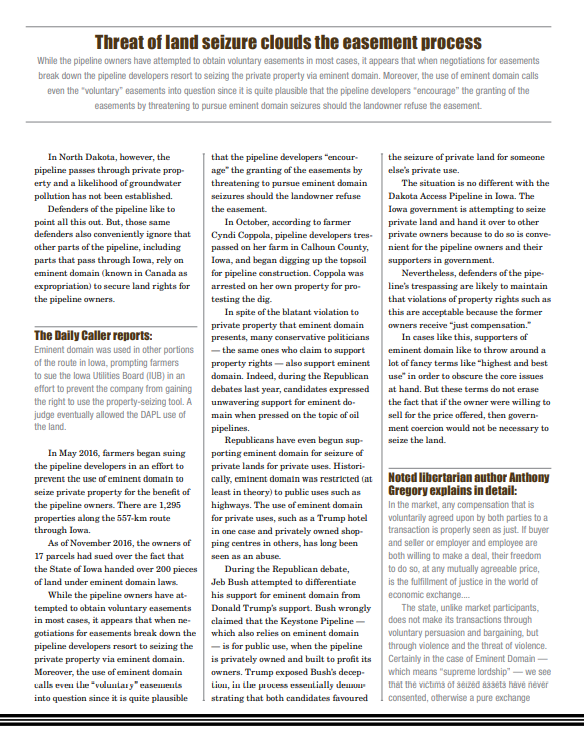 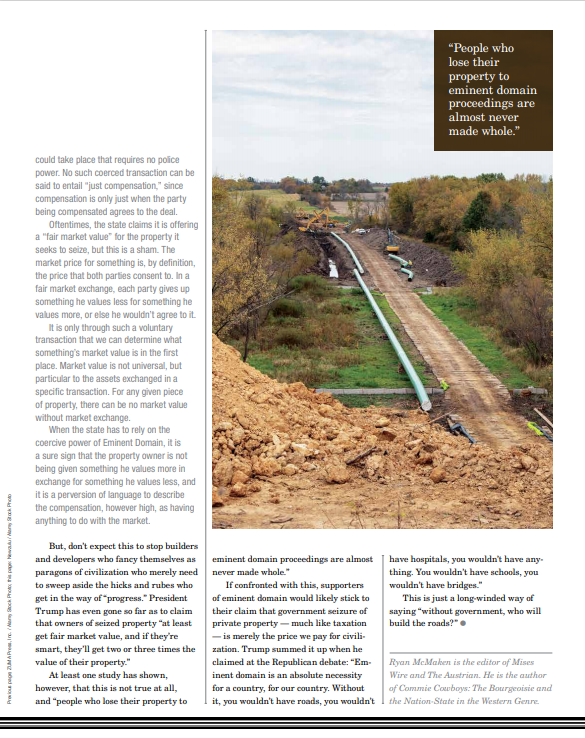