Is it okay to steal as long as you promise ahead of time to pay damages?

The only person who can determine the value of property is the owner of that property. There is no such thing as fair market value other than the price that the actual owner is willing to sell to an actual buyer.

In Canada, the term for the legal theft of private property is “expropriation.” In the U.S. it’s called “eminent domain.” This legalized plunder is considered acceptable in many jurisdictions — after all, the victims are given compensation in the form of “fair market value.”

Fair market value is defined in these jurisdictions as the price it is imagined a willing buyer would pay a willing seller. “Willing” being the operative word, of course.

There are numerous reasons sellers who have exactly the same item for sale might charge different prices for it. Sometimes property is valued so much by its owners that they won’t part with it for any price.

As soon as the term “fair market value” is bandied about, you can be sure that the marketplace of willing buyers and sellers has nothing to do with it.

Pretending that you know what would happen if you had a willing seller of the property in question is completely ignoring the fact you actually have a real-life property owner in front of you who is telling you what the fair market value of his or her property is.

The idea behind fair market valuation is rooted in the Common Law concept that victims of crimes ought to be restored to wholeness by the perpetrator. This most often takes the form of some form of economic compensation to help the victim overcome the damages caused by the crime and return to a fully restored state.

We don’t say its okay to rob another person provided you promise ahead of time to pay damages. We would still consider it a criminal act, and we deal with the perpetrators of crimes by locking them up or sanctioning them somehow. We certainly don’t institutionalize these crimes and make them a government program.

Consent is the missing ingredient when we bring up the term “fair market value.” Consent is the difference between a boxing match and an assault, between a legitimate transaction and theft. No amount of money makes it okay to violate another person. 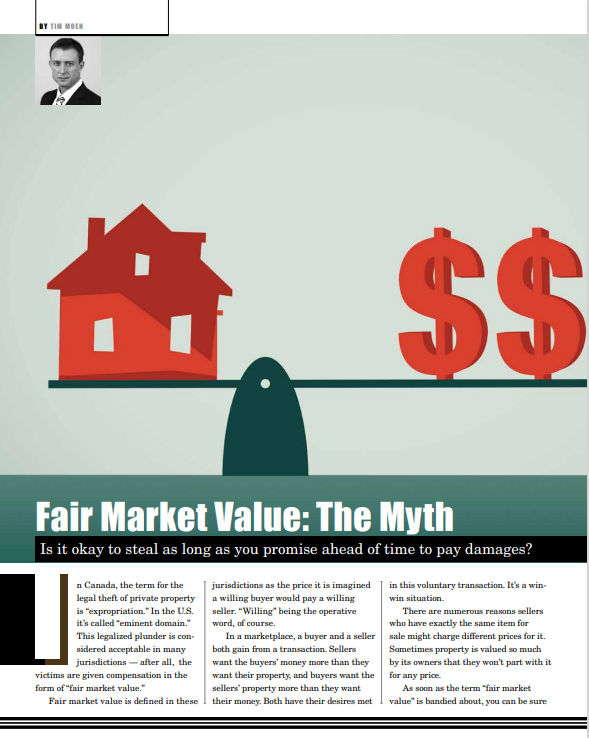 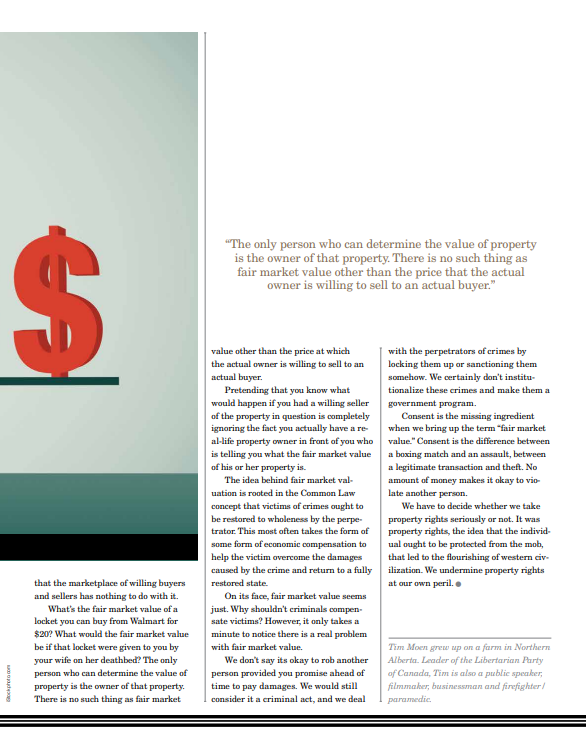 Tim Moen grew up on a farm in Northern Alberta. Leader of the Libertarian Party of Canada, Tim is also a public speaker, filmmaker, businessman and firefighter/paramedic.