Markets cannot ascribe a value to something — only individuals can.

By Danny LeRoy and Zach Gorham

A willing seller is a necessary part of a fair deal

Advocates of eminent domain — known more accurately as expropriation in Canada — justify its use with the claim that when property is taken from private individuals for public use, they are compensated with the fair market value of what had been their property. While at first this may seem reasonable, further consideration reveals that it is not.

According to the Canada Revenue Agency, fair market value is “the highest price … obtainable in an open and unrestricted market between knowledgeable, informed and prudent parties acting at arm’s length, neither party being under any compulsion to transact.”

What this unobserved highest price is can only be a guess. And your guess is as valid as mine or anyone else’s. A definitive amount beyond dispute is also out of reach. No matter how well-educated or well-intentioned, arbitrating a “fair market price” is not a substitute for actual market processes.

Consider the case of an expropriated parcel of land. With fair market valuation, the previous use of the property is taken into consideration and the owner is also compensated for the loss of the productivity of the land. If the land had an agricultural use, for instance, the owner would receive some compensation for the crops he would not be able to grow in the future

First, we do not and cannot know how much the land would actually sell for on the open market. A potential buyer’s willingness to pay is personal, specific to time, place and circumstances. There may be several potential buyers willing to pay different prices for the same property, but who these people are and what they are willing to pay is not knowable.

Second, transactions on the open market always involve willing buyers and sellers mutually agreeing on price. If the seller values his property more than the money the buyer is willing to give up for it, no transaction occurs.

Think about that in a real context. If you are not willing to take anything less than $10,000 for your used car and a potential buyer is only willing to offer $8,000 for it, will the deal be done? The answer is no. Both buyer and seller must agree on a price for there to be a transaction.

How can this be considered fair? Would it be a fair transaction if the guy that came to look at your car got to buy it for the $8,000 he wants to pay for it, without consideration of what you wanted to sell it for?

A related issue is that in any exchange, value never equals price. Think of it in terms of another real-life example. If a real estate tycoon wants to build a hotel on top of Grandpa’s old farm, is the value of the farm only the value of the land? What if you grew up on that farm and had wonderful memories of Grandma and Grandpa there and wanted to keep the land in the family for generations to come?

There is more value to that land to you than any price it could fetch. How does the concept of “fair market value” as defined by the proponents of eminent domain/expropriation account for this kind of valuation? How do you tangibly quantify emotional attachment?

The takeaway point is perhaps the subtlest aspect of economic theory: the relation between value — which is subjective, non-quantifiable and specific to time, place and circumstance — and price, which is objective and measurable.

The resulting price may be public knowledge, but the value to the individuals is known, and can be known, only by them.

Also important to note is that markets are processes, not sentient beings.

Markets cannot ascribe a value to something — only individuals can. Moreover, processes have no sense of justice; rather, it is the actions of individuals that can be ethical or not. The concept of fair market value, as something objective, quantifiable and calculable, is an illusion.

More importantly, in the absence of market processes, it’s impossible to arrive at a price.

Governments may have the legal ability to apply the dubious concept of “fair market value” to establish an exchange ratio for a good or service. But this ratio is not a price, properly understood. A taking via expropriation, in lieu of a property sale, is not a market-based transaction, since one of the parties, in this case the seller, is coerced.

Compensation for legalized takings is not comparable to prices discovered through the free interplay of buyers and sellers in the unhampered market.

Danny LeRoy, PhD., is an economics professor at the University of Lethbridge where he is also coordinator of the Agricultural Studies program. Areas of research include commodity production, marketing and trade, government interventionism and Austrian Economics. He occasionally blogs at Mises.ca.

Zach Gorham was born and raised in Southern Alberta. He is currently studying Agricultural Biotechnology at the University of Lethbridge and has a keen interest in Austrian Economics. 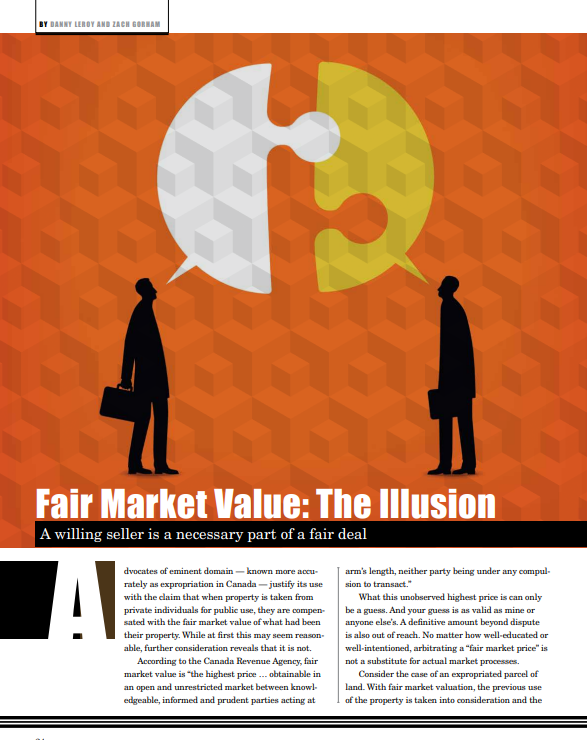 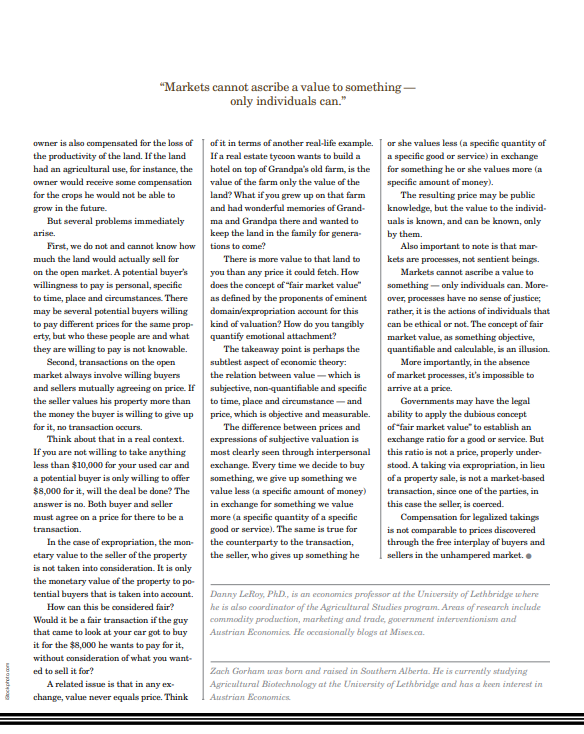