“Soils examined were from old sawmill sites contaminated with polyaromatic hydrocarbons (PAH compounds) and dioxins. In laboratory scale tests, the best results showed 96 per cent of PAH compounds and 64 per cent of the dioxins were broken down in three months.”

Environment, biosecurity and bioremediation are top concerns for CAEPLA. That is why we believe mycoremediation (bioremediation involving the use of fungi) is something the energy transport industry and landowners should become educated on.

Fungi can be harnessed to clean polluted soil which cannot be cleaned using traditional composting. This was the finding of Erica Winquist, PhD in biotechnology, in her doctoral dissertation for Aalto University School of Chemical Technology in Helsinki, Finland.

In Finland during 2005 and 2006, almost three million tonnes of excavated, contaminated soil were transported into landfill sites and other treatment plants. Most of the soil ends up in landfills because at the moment, landfill sites accept it for the use of construction of field structures for new landfill sites.

A more sustainable practice would be to clean the polluted soil, rather than just take it to a landfill. Currently, putting it into a landfill is far too easy and cheap. In addition, there is limited use of other methods. For example, burning the soil at a high temperature (over 1 000 degrees) in an incinerator destroys the organic pollutants, but the process is expensive and there is insufficient incineration capacity to treat all the soil that requires burning. Fungi could be used to expand bioremediation for the destruction of the more enduring organic pollutants too, states Winquist.

The fungi are grown on pine bark, which contains compounds that prevent the growth of other microbes which makes it a good growing medium for fungi. The growth period lasts four to six weeks. The actual cleaning by using fungi takes place in a treatment plant where the mycelia (or vegetative part of the fungus) of white rot fungi are allowed to grow in the polluted soil.

White rot fungi grow naturally on wood. As they grow in the soil, they break down the compounds with lignin-like structures that pollute it. The soils examined were from old sawmill sites that were contaminated with polyaromatic hydrocarbons (PAH compounds) and dioxins. In laboratory scale tests, the best results showed 96 per cent of PAH compounds and 64 per cent of the dioxins were broken down in three months.

The research was carried out in cooperation with the University of Helsinki as well as with the Finnish Environment Institute. Funding was provided through the Symbio programme run by Tekes, the Finnish Funding Agency for Technology and Innovation, as well as by the companies working with the programme. Research into the environmental applications of fungi continues to be carried out at the University of Helsinki. Ekokem Oy, one of the companies involved in the research has acquired the rights to the method of using fungi for cleansing. 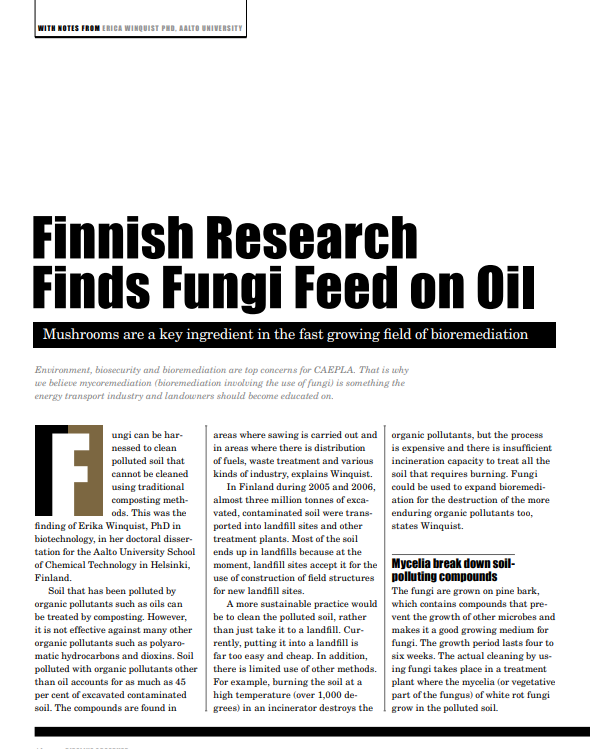 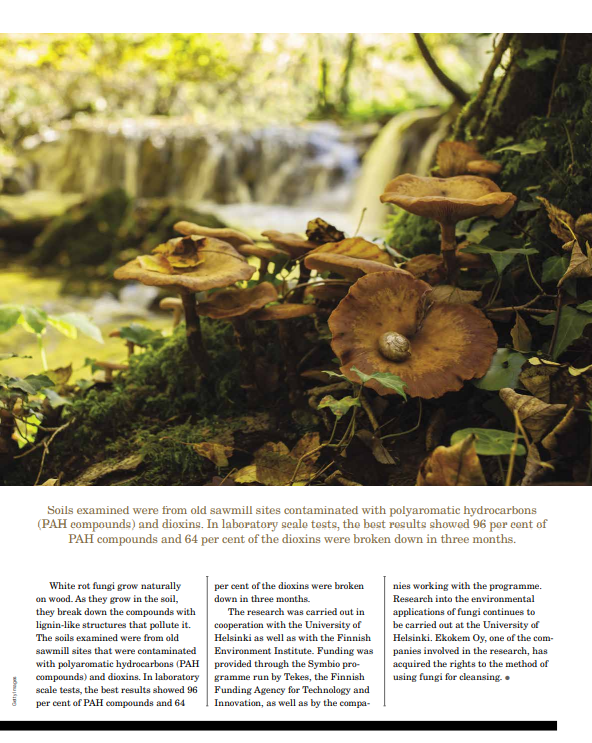