Eyes in the Sky

“It’s better to learn you have a crack during a flyover than to hear you have an oil spill on the 6 o’clock news.”

Small motors and colourful electrical components cover every surface in what, to the casual observer, looks like your average home.

That’s because for Chris Procaylo and other members of a Winnipeg-based drone think-tank, there isn’t a lot of difference between the boardroom table and the kitchen table when it comes to innovation.

“Every day there is some new technology that’s available, that’s been developed or finally become affordable for those experimenting with unmanned aerial vehicles — what most people just call UAVs,” Procaylo says.

A Winnipeg Sun photojournalist by day, he immediately saw the potential UAVs, or drones, had for photography.

“Getting a different angle, looking top down or getting close to something like a fire or spill, that just wasn’t possible before. Not unless you wanted to hire a helicopter or hop in a Cessna,” he explains.

But the potential of these compact portable aircraft extends far beyond photography. Any type of imaging system can be attached to the platform — be it infrared, thermal or multi-spectrum. With the right imaging system, everything from potato fields to pipelines could be inspected, Procaylo says, adding that already many farmers are making use of the technology to monitor crop growth patterns and fine tune inputs.

“Instead of walking or driving miles to find a broken fence, you can just fly the perimeter, or if a rancher is missing cattle, they can do an aerial search. There is so much opportunity,” he says.

David Weber has been involved with the think-tank team for over a year and has found UAVs most helpful in his architectural work.

“To get the big picture, visualize the whole structure, it really allows me to see an entire project in one shot,” Weber says. “Plus every roof we don’t have to climb up on is one roof we can’t fall off of.”

Procaylo agrees that increased safety is the greatest potential UAVs have to offer.

“Over water or dense forest, if there is a hazardous material spill, you can get in close and stay safe. If you’re working with oil and gas, this gives you an option to inspect infrastructure and prevent accidents before the risk even occurs,” he says. “Security is another application, identifying trespassers or strange vehicles. I don’t think you can overstate the potential these aircraft have to provide peace of mind.”

Not only do they provide reassurance to businesses, drones also help assure the public that a company has the ability to respond swiftly and responsibly to emergencies. Or better yet, Procaylo adds, having regular UAV inspections of infrastructure such as pipelines could prevent accidents before they occur.

“They are your eyes and ears when you can’t get to where the action is,” he says. “And it’s better to learn you have a crack during a flyover than to hear you have an oil spill on the 6 o’clock news.”

But getting off the ground is always an evolving process, say UAV users and builders. Sometimes the right tool for the job is a custom-made aircraft, other times it’s a prefab UAV or a standard aircraft that’s been modified, or as Weber puts it, “hacked.”

“We’ve spent a lot of time on the drawing board, and while we don’t currently have any industry partners, we’re at a place where we’re ready to launch,” Procaylo says. “It’s an area that’s developing really quickly.”

Currently, Transport Canada requires drones to be operated within sight of the operator. Video piloting or FPV (first person view) is technically possible, but not yet legal in Canada.

To test some models in the field, Procaylo travelled over seas last summer to Tunisia, where restrictions are almost non-existent.

“There are also some just spectacular things to photograph there,” he adds, noting it won’t be long before more possibilities open up at home. “One day the sky really will be the limit.” 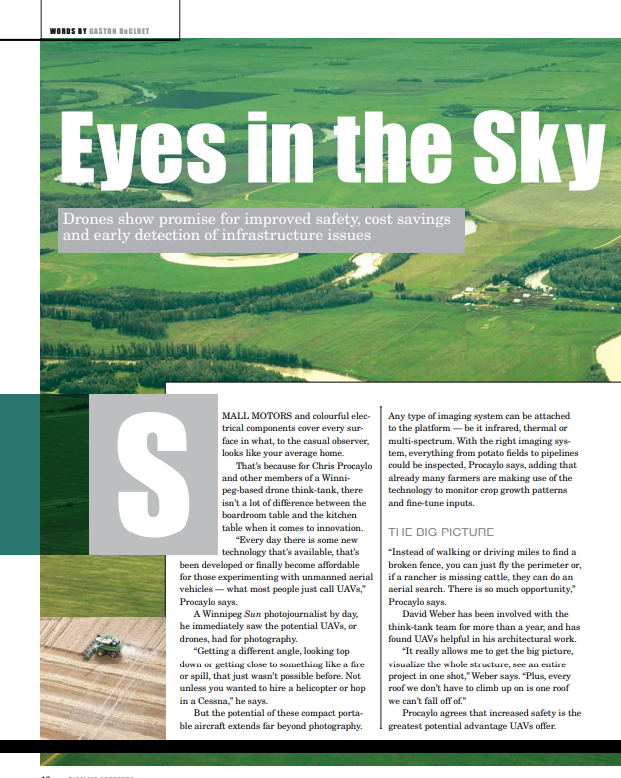 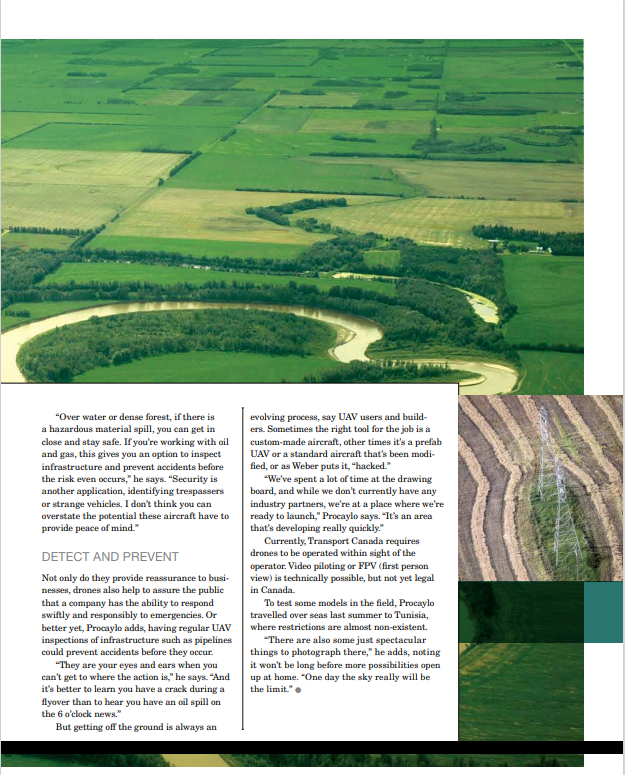