Everything You Need to Know About the Latest on Line 3 Replacement...

Calgary – Enbridge’s Line 3 Replacement is complete and will ship its first oil on Dec. 1.

In Canada, that is.

The Minnesota portion – the replacement portion – has not been built, due to continual delays in Minnesota. But that does not mean that Line 3 is not in operation, nor is the Canadian Line 3 replacement a pipeline to nowhere. The new pipe meets the old pipe at the international border at Gretna, Manitoba. And the old pipe, in the U.S., continues to be in usage until it is replaced.

As a result, the new pipeline, one of five pipes that makes up Enbridge Mainline system, will soon be in operation.

The mainline system runs from Hardisty, Alberta, east-southeast through southern Saskatchewan and Manitoba. It crosses into North Dakota at its very northeast corner before going on through Minnesota to Superior, Wisconsin. From there the mainline system splits, going through Wisconsin and Michigan to Sarnia, Ontario, and south to Chicago, around Lake Michigan, and again to Sarnia.

A sixth pipeline in the Mainline, Line 13, was reversed and is used to import diluent into Canada. It is now known as “Southern Lights.” While there are other export pipelines, the Enbridge mainline system is the primary conduit of Canadian oil exports from Canada to the United States.

As the old Line 3 in the United States is operating at a reduced capacity, the new line in Canada is, for now, going to run at about half its rated capacity. The Line 3 Replacement will continue to transport light and medium grades of crude oil as it does today.

Coll provided a statement by email, saying, “Enbridge had previously indicated 50,000 to 100,000 barrels per day of additional throughput on the Mainline in 2019 through various optimizations. Having the Canadian portion of the Line 3 Replacement Program (L3RP) in-service provides additional flexibility in terms of how we meet our 2019 throughput objective. The new Line 3 won’t have the same operating restrictions of the old line in Canada. Bringing it into service allows us the flexibility to transport more product in Canada and it allows us to maximize previously under-utilized points on the system, which can then be connected to existing Mainline pipes in the U.S. that are able to take on the capacity while still meeting all regulatory requirements, including all maximum allowable operating pressures.

“The L3RP is an essential, reliability and safety-driven maintenance project constructed with the newest and most advanced pipeline technology. We are putting this into service because it’s brand new infrastructure that’s ready to go. We will continue to operate Line 3 in Minnesota within the lower maximum allowable operating pressure limits set several years ago to ensure safe and reliable operations.”

The new pipeline will run at approximately half of its rated capacity, some 400,000 barrels per day, until such time as the Minnesota portion receives final approval, is constructed and brought onstream.

“First and foremost, the Line 3 project was about enhancing the safety and integrity of infrastructure that is critical to the functioning of our society, much like a highway, a bridge, or an airport,” Leo Golden, Vice President, Line 3 Project Execution said in an emailed statement. “Today, Line 3 is one of more than 80 oil and gas pipelines and 30 major electric transmission lines that cross the Canada-U.S. border, operating as part of a single, integrated North American energy market. Access to this continental energy market is critical for consumers, industry, and governments.”

The new pipeline stretches approximately 1,070 kilometres (665 miles) from Hardisty, Alberta to Gretna, Manitoba. At an estimated cost of $5.3 billion, it represents the largest capital expenditure – which Enbridge noted is the largest and most successful stakeholder engagement undertaking – in Enbridge’s 70-year history in western Canada.

“We are truly grateful and humbled by the tremendous support we’ve received across Alberta, Saskatchewan and Manitoba for this project over these past six years,” said Golden. “Without that support and collaborative mindset, we wouldn’t be where we are today.”

While most of the topsoil has been put in place, there is a portion that did not wrap up this year. Around 100 kilometres of right-of-way remains, in the proximity of the Langbank pumping station and south of Moosomin.

“We’re out of the field now for the year,” Coll said, noting that “nasty” weather had delayed reclamation efforts in the area. He said they expect to return in late May, 2020, to finish the job.

“We hoped to finish this year,” he said.

Asked what is next for Enbridge in Saskatchewan, he said nothing of the magnitude of Line 3 Replacement. They will continue maintaining the system through integrity digs.

The company has three years to decommission the old Line 3 in Canada, which will involve draining it, segmenting it and permanently sealing it off. The line will be left in the ground, as removing it would be as significant an operation as installing a new pipe, but with the added difficulty of working between several pipes in operation. (Heavy equipment generally cannot pass over pipelines without substantial padding lest they cause damage.)

Coll said, “Timing of decommissioning will be consistent with the original plan filed with the Canada Energy Regulator, which has this occurring in phases. We anticipate this work will commence in the spring of 2020.

“In the meantime, a small portion of Line 3 is being used between Hardisty and Regina, shipping approximately 35,000 barrels per day at pressures well below previous levels.

“The entire Line 3 in Canada is expected to be decommissioned by 2022, consistent with the decommissioning plan filed with the Canada Energy Regulator.”

The Northern Gateway project was cancelled in 2016 as the federal government instituted a ban on oil tankers off the northern British Columbia coast. However, that project has stayed alive in the political discourse since then, with several premiers demanding a lifting of the tanker ban. Asked if Enbridge was looking at Northern Gateway, Coll replied, “Since the cancellation of Northern Gateway, Enbridge has focused on executing its Line 3 Replacement Project, which will improve safety and reliability of the pipeline, and return it to its original capacity. We are in constant conversations with our customers to look at ways to optimize our current network of pipelines to meet their needs.” 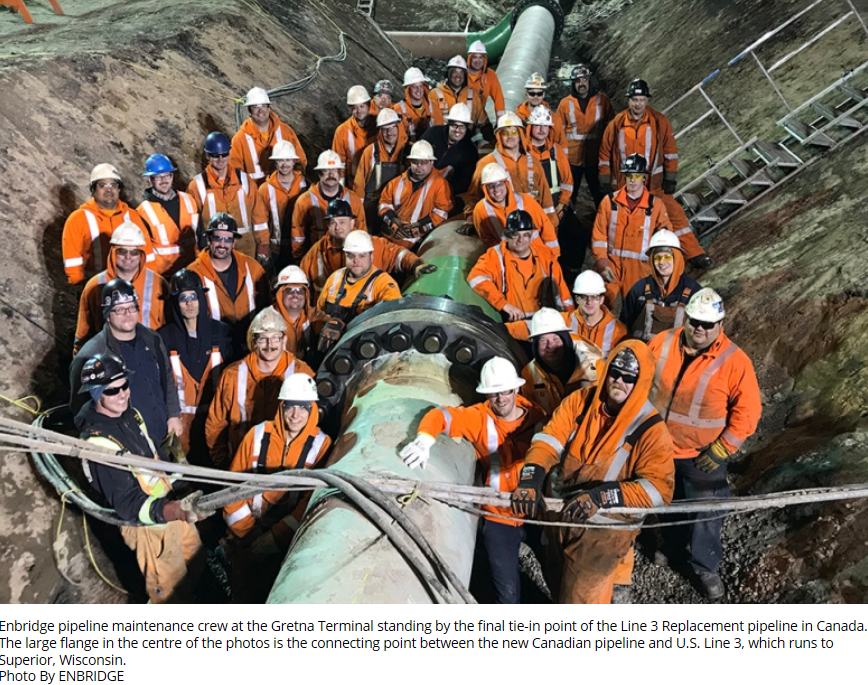