Everybody Benefits from Pipelines

“In 2013, Galloway Construction Group took the position that enough was enough: the spread of noxious weeds through access matting was unnecessary and out of control.”

Natural Resources Canada estimates that there are 840,000 kilometres of pipeline within our country.

To put that into perspective, the Canada-U.S. border is about 6,422 kilometres long. There’s enough installed pipe in Canada alone to span that entire border almost 131 times, coast to coast.

It’s important to note that this is Canada, not Alberta, not British Columbia, not Ontario and not Prince Edward Island. This situation is not unique to Canada, either—the Global Energy Institute estimates that there are 4.1 million-plus km of pipeline installed in the United States.

Like so many others, I have witnessed first-hand the struggles when industry and landowners do not cooperate. There is no progress, there are no profits and neither party leaves the project happy.

An impasse is not a precedent that should be set for the younger generations who are learning to lead future projects—it is not a legacy we should leave behind.

Galloway Construction Group Ltd. in Ponoka, Alta., like many other firms on the cusp of innovation, constantly asks not only management and executives, but everyone else all the way to front-line labour, “Is there a better way?”

As more companies and landowners begin to ask this question, the answer becomes quite clear: there has to be.

Fortunately, innovations that break with the traditional way of completing projects are constantly coming onstream. These innovations help industry advance while working side by side with landowners to move the interests of both parties forward.

With the planting of this year’s crops still fresh on every farmer’s mind, it is safe to assume that worries such as clubroot have already been considered at least once this year. As one of the oldest, most pernicious, and easily recognizable plant diseases, it seems odd that even to this day industry and landowners are still locking horns over mitigation techniques.

In 2013, Galloway Construction Group took the position that enough was enough: the spread of noxious weeds through access matting was unnecessary and out of control. Through a partnership with Newpark Mats and Integrated Services, DURA-BASE® composite matting was reintroduced to Western Canada.

Unlike traditional wooden or even rubber access matting, DURA-BASE® access mats are compression moulded into a single piece made from a non-porous HDPE material.

What this means is that they can effectively be decontaminated of not only clubroot spores, but also of all other noxious weeds and contaminants. The single-piece construction also means that there is no debris left behind for landowners to pick up after the project has come and gone.

Farmers and other landowners are doing their part to help solve biological issues that plague the land. For clubroot alone, they have introduced resistant varieties of canola seed, they are planting bait crops, and they are embracing healthy crop rotations—among many other practices.

Industry has taken note of the extra effort put forth by landowners and is exploring innovations such as DURA-BASE® composite matting. No one is forcing the multi-national energy providers that are constantly in the news to utilize DURA-BASE® composite matting; they are doing it voluntarily together with Galloway Construction Group because it is the right thing to do.

Every single one of us benefits—if not profits—in one form or another from the pipelines that run across North America, and their installation and maintenance shouldn’t be a fight while renewable energy sources are developed. The solution should be clear.

It should be an easy choice for landowners to say yes to industry. It doesn’t have to be “us or them.” We all have the same fundamental needs for heat, for power, for fuel, for travel … we should all be moving in the same direction.

With all the innovations at their disposal, it is easier than ever for companies to leave the land better than when they entered it. We should all be moving forward together—and we will.

— Chace Elliott has more than nine years’ experience in the oil and gas and heavy construction industries, working with Galloway Construction Group and founding his own company. He holds a master’s degree from Dalhousie University in Resource and Environmental Management. His international experience includes partnerships and expansion opportunities between Canada and the U.S., and his current research involves studying the correlation between the spread of noxious weeds and the construction of linear projects. 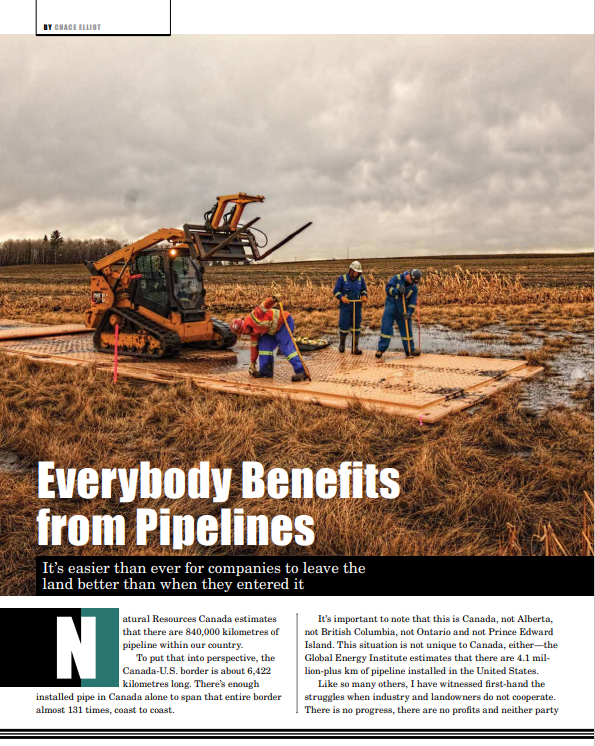 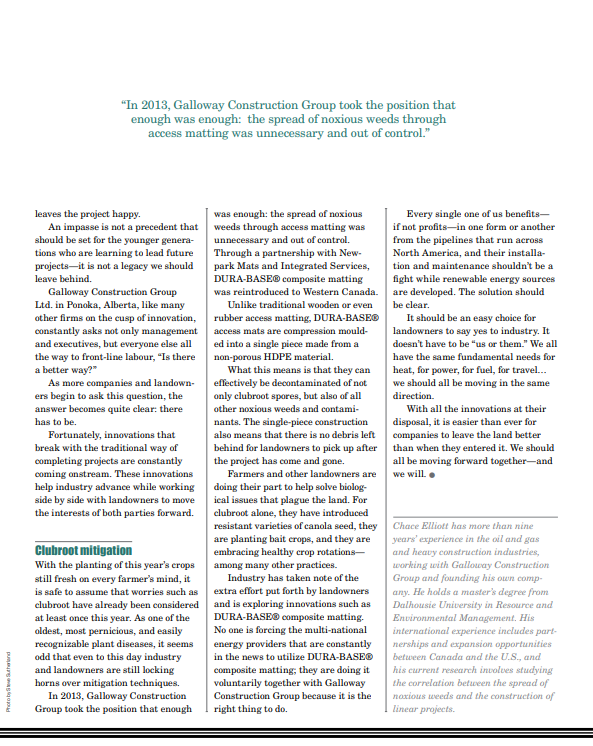