Because CAEPLA counts on you and our loyal landowner readership to make publication of the Pipeline Observer's unique information and perspectives possible.

Without the support of several hundred pipeline landowners like you, the Pipeline Observer would not be able to present independent minded content on a quarterly basis.

Will you continue to help us remain free and independent, delivering all the news and views pipeline landowners and the public need to properly understand property rights at this important period in history?

I have in my hands the list of journalists who secretly took a $61-million pre-election pay-off from Justin Trudeau.

Trudeau shovelled it out the door to them just before he called the election. And he kept the list a secret. Until now.

You can see the list for yourself at RebelInvestigates.com — seriously, go there and take a look.

That means there’s nearly 1,500 news media took the bribe. It’s actually more than that, because this doesn’t list individual reporters, but rather companies.

I won’t even call these 1,500 companies corporate welfare bums — because all that means is that they’re mooches.

I mean, it’s gross, giving them $61-million dollars of public money in the middle of a pandemic as if they're a very high priority. But it’s not just the shocking amount of money — Trudeau spends more than a billion dollars a day. It’s that he’s corrupted the media.

Now The Subsidies Are Secret

Well we immediately filed an access to information request to the government, when we saw the Blacklock's story. And, to my surprise, the government actually answered us in the required 30 days.

So we simply asked for the list — and we got it.

And again: why did no-one else do that? Well, duh. Because nearly 1,500 companies are implicated in it

Go to RebelInvestigates.com, and read through the list of nearly 1,500 media organizations who thought they could keep a secret — and indeed they did, were it not for the good work of Blacklock's, and then our own access to information researchers. Go through the list and realize, and remember, these people are not news media. They do not tell you the whole story, they do not tell you the other side of the story, and when they themselves are part of the story, in a disreputable way, they will hide the truth from you. And you know, they almost got away with it.

Go read the shameful list at RebelInvestigates.com. And if you think our access to information researcher did a good job, please leave a tip in the tip jar.

Unlike these 1,500 presstittutes, we’ll never take a dime from Trudeau, not even in secret.

Read the 29-page document for yourself here:

UPDATE FROM EZRA LEVANT: Jonathan Bradley, a reporter at the independent website Canadaland, received the same Access to Information documents about Trudeau’s media bail-out on the same day as we did. We chose to wait until after the weekend to publish our story; Canadaland published theirs on Friday. You can read it here.

Credit where credit’s due — they did a great job reporting the story, and they published before we did. We hadn’t seen their story before we published ours, which is why we claimed the scoop. But they were first. 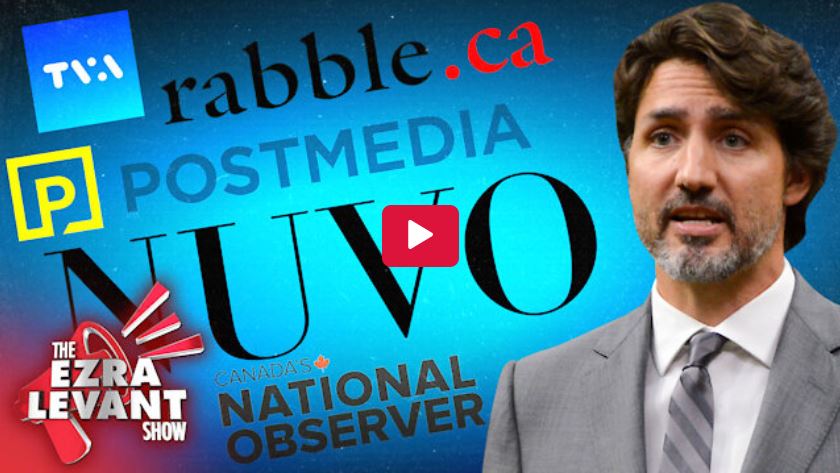