CAEPLA has been warning about the growing threat of eco extremism bordering on terrorism for years.

Not only are stunts like this violations of property rights -- very often of both company and pipeline landowners -- they put the public living along energy corridors at great risk, too. 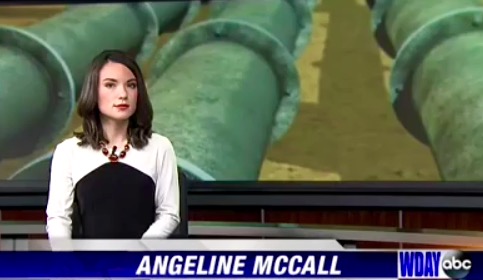 PEMBINA COUNTY, N.D.—A climate activist is facing up to 21 years in jail for turning an emergency shut off valve on a major Pipeline in North Dakota.

The convicted man, Michael Foster, awaits sentencing for what he says was effort to bring awareness to global warming.

"For a few minutes anyway, 15% of the nation's oil supply stopped moving. So a couple of million barrels of oil stopped going to market," said Foster, environmentalist.

Foster, along with four others are the so-called Valve Turners.

They decided to shut off emergency valves at different sections of Keystone 1 pipeline at the same time.

Foster said, "There's no politician, no corporation doing the thing we need to do to protect our young, our home, our land, our water, so we took action."

Foster says he called the pipeline developer, Transcanada, beforehand to let them know what he was doing.

He waited for Pembina County Sheriff's Deputies to arrest him.

On Friday, a jury of his peers convicted him.

"I'm worried that some of the jurors might be feeling bad for convicting a nice guy and putting him in prison. That's a heavy burden for a good Christian person to bear," said Foster.

Foster says he's not upset at jurors for the decision.

His lawyers originally wanted to argue their actions caused more good than harm, in the name of climate change, according to court documents.

The judge ruled against the move and also refused to allow four expert witnesses and dozens of exhibits.

He says this is all part of civil disobedience, inspired by an icon.

Foster said, "King said when a person challenges an unjust law and is willing to face the punishment it arouses the conscious of the community and shows ultimate respect for that law."

However, the cost of breaking the law isn't cheap.

TransCanada says it cost the company about $10,000 to restart the pipeline after Foster stopped the flow.

He's hoping jurors and the rest of Pembina County will take a second look at Climate Change.

"What I did to keep our kids safe years and yours and mine, was seen as a threat to our kids by my jurors who also want to keep their kids safe," said Foster.

With over two decades of his life on the line, he'll find out how much time he'll serve in January.

Another valve turner, Samuel Jessup, is facing up to 11 years in prison as a result of his actions including conspiracy to commit criminal mischief.