CALGARY -- The owner of the Keystone pipeline says the line has returned to service after a breach that leaked an estimated 1.4 million litres of oil in northeastern North Dakota late last month.

TC Energy Corporation says the move follows the approval of its repair and restart plan by the U.S. Pipeline and Hazardous Materials Safety Administration, which ordered the line shut until the Canadian company completed corrective action.

The company says it will operate the pipeline at a reduced pressure with a gradual increase in the volume of crude oil moving through the system.

The line, which began operating in 2011, is designed to carry crude oil from Alberta across Saskatchewan and Manitoba, and through North Dakota, South Dakota, Nebraska, Kansas and Missouri on the way to refineries in Patoka, Ill. and Cushing, Okla.

The spill affected about 2,090 square meters of land near Edinburg, N.D.

TC Energy says it continues to work closely with the U.S. Pipeline and Hazardous Materials Safety Administration and the North Dakota Department of Environmental Quality as it investigates the cause of the breach.

"We appreciate the cooperation and support from local officials, emergency response personnel and commissioners in Walsh County, as well as the landowner who has granted permission to access land for assessment, repair and clean-up activities," TC Energy said in a statement on Sunday.

"We also want to recognize the continued efforts of our crews, contractors and businesses in the community for their around-the-clock support, which has allowed us to respond quickly and safely to this event."

The company adds it is communicating plans to its customers and will continue working closely with them as it begins to return to normal operating conditions.

It said on its website that it has observed no significant impacts to the environment.

The pipeline spill and shutdown come as the company seeks to build the US$8-billion Keystone XL pipeline that would carry oilsands oil from Alberta to refineries in Texas.

The proposed pipeline has drawn opposition from people who fear it will harm the environment. 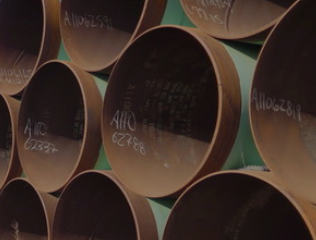