On Friday, Calgary-based Enbridge Inc. said an optimization program on its Mainline system — which accounts for about 70 per cent of Canadian oil exports into the United States — is expected to add 100,000 barrels per day of additional capacity by year-end.

Enbridge added it plans to bring on another 50,000 bpd of capacity in a smaller pipeline expansion early next year. Last summer, rival TC Energy Corp. held an open season to assign 50,000 bpd of added incremental capacity on its existing Keystone pipeline system into the U.S.

On a conference call, Enbridge CEO Al Monaco said having the Canadian side of its Line 3 replacement pipeline in service by Dec. 1 will help meet producer demand on a Mainline system that has been operating at near maximum capacity, clocking in at over 2.7 million bpd in the third quarter.

“On the Mainline, we expect to bring in about 100,000 barrels per day of incremental capacity by year-end. That extra 100,000 comes from capacity recovery, optimization of receipt and delivery windows, as well as leveraging Line 3 Canada,” he said.

“We’re also moving forward with a 50,000-barrel-per-day expansion of Express to serve PADD 4 (U.S. Rockies region). That should be ready in Q1.”

The American part of the $9-billion Line 3 project could still be in service in 2020, as previously predicted, but timing is unclear after state utility regulators in Minnesota in October ordered further study on the potential effects of oil spills in the Lake Superior watershed.

“Once we have timelines from the PUC (Minnesota public utilities commission) and agencies, we will be able to provide the next key milestones toward the start of construction,” said Monaco.

Completion of Line 3 would add 370,000 bpd of oil export capacity. Meanwhile, construction is proceeding on the Trans Mountain pipeline expansion to the Canadian West Coast but the Keystone XL pipeline has been delayed by court challenges in the U.S.

The failure of pipeline expansions to keep up with growth in oilsands production has been blamed for steep oil price discounts in Alberta.

Enbridge shares rose on the Toronto Stock Exchange after it reported record third-quarter adjusted earnings and distributable cash flow driven by high levels of oil transported on the Mainline and input from new capital projects placed in service.

The company says it earned $949 million in the third quarter, up from a loss of $90 million in the same quarter last year caused by a number of one-time charges.

Analysts had expected adjusted earnings of $1.09 billion, or 53 cents per share according to financial markets data firm Refinitiv.

In a report, analysts at Tudor Pickering Holt & Co. welcomed the company’s expectation to finish the year above the midpoint of financial guidance following a “steady quarter” ended Sept. 30 and despite delays in its Line 3 project. 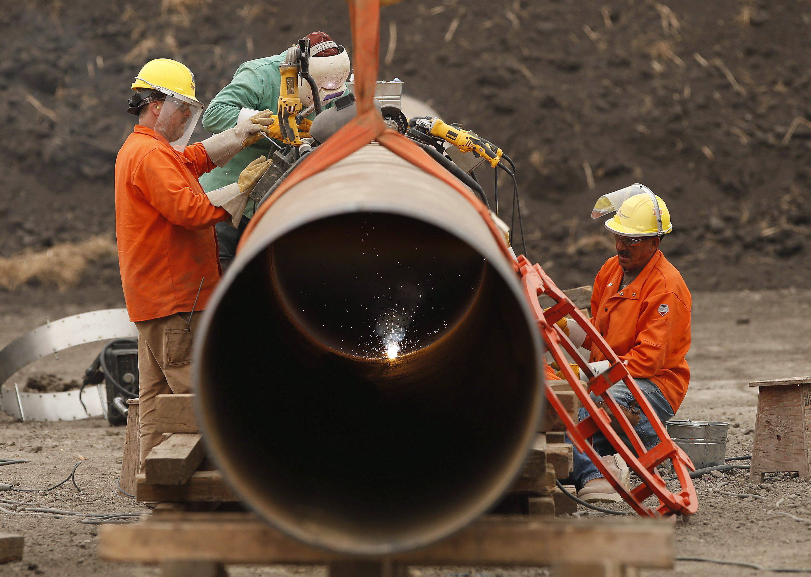