Don’t Want TMX Built? Be careful what you wish for…

“Things could get pretty chaotic without the protection of a CAEPLA contract covering integrity digs.”

Many directly affected landowners on the Trans Mountain Expansion (TMX) are ambivalent about the project.

Some will sign the first document put in front of them if it includes a cheque, without considering the consequences. Sometimes they’ll sign even without the cheque.

Others will ask a few questions, because deep in their gut they know this will have impacts on them. But they are intimidated by — and have no idea how to deal with — the slick land agent representing a multibillion-dollar corporation that once had government backing and expropriation powers and now is the government, with even more power.

Some landowners with more assertive personalities will succeed at getting a little extra compensation. They will be satisfied they outsmarted the agent and even their neighbours, much like the fellow I will introduce you to later in this article — before he found CAEPLA.

Last but not least are those who will be determined to get changes to the easement agreement, fair compensation and will not sign on principal. But they will still get expropriated.

The thing all of these folks have in common is that they are all in the same boat — a boat designed to sink them and get their property on the cheap. The intent being to cut them adrift on their own property without their right to a freely negotiated contract that would protect their family, their investment and their business.

Would it really be better if TMX is never built?

The “boat” I refer to, of course, is Canada’s energy regulatory regime.

I am sure that after reading these seemingly cynical, but true, statements you may say, “Well then maybe it’s better if it doesn’t get built.”

But would it be better? Will it be better if the project doesn’t get built, if it continues to be sandbagged by activists, treated like a political hot potato and parked permanently by government?

Imagine what a future without the expansion will look like.

Without a new pipeline, with new technology, what will you be left with?

Trans Mountain was built in the early 1950s — it’s almost 70 years old. Trust me, it is corroding. There is a very good chance there is, or soon will be, contamination on your land or your neighbours’.

And the Right of Way (RoW) on your land may be just as old as the pipe, but recent legislative changes under the Canadian Energy Regulator and Environmental Assessment acts have opened your property up to a whole slew of new problems.

Get the protection of a CAEPLA contract

Among these new problems are politically approved trespassers with the power to suspend operations on your property with a claim they found so much as an arrowhead or bone fragment in your soil. Soil that will be dug up if the TMX proceeds.

Without a quality contract of the kind we at the Canadian Association of Energy and Pipeline Landowner Associations (CAEPLA) have been creating for nearly a quarter century, you will have no legal say over what happens with the old pipe.

No say over how or when government workers — TMX remember, is owned by the Canada Development Investment Corporation, a federal Crown — access the RoW across your property.

Yes, the federal government and its friends are now squatting in your backyard.

More than one TMX landowner has contacted CAEPLA to say “there goes the neighbourhood.”

And they are right.

If you thought you had problems with Kinder Morgan or any previous private owner of the pipe, you ain’t seen nothing until you’ve been afflicted with an energy project owned by a Crown corporation. Just ask the long-suffering members of Manitoba’s BiPole lll Landowners Committee (MBLC), still fighting the good fight alongside CAEPLA in that province.

Beware, too: at one time only authorized personnel who had no interest in the rest of your private property could come on that easement. That is no longer the case.

And those government-mandated, trespassing political activists will be able to restrict your farm, dwelling or business. And even sterilize your property as an archeological or heritage site as government panders to anti-pipeline special interests.

It’s already happening in BC with values of residential properties being destroyed by heritage-type activists.

There are also many historically contaminated sites along this pipeline that have never been cleaned up.

Contamination on your private properties that the incompetent federal regulator has left in limbo for decades as its jurisdiction trumped provincial and landowner initiatives to hold companies to account.

I am sure Kinder Morgan was quite happy to unload this controversial project, the corroding old pipe and those polluted sites to unsuspecting Crown Corp bureaucrats and politicians as approval timelines and costs spiraled.

We all know what happens to metal over the years. Cars and machinery eventually corrode and rust out.

Pipes in our houses eventually wear out from use and spring leaks.

Pipelines are no different. And leaky pipes have the potential to transform your farm into the equivalent of an abandoned urban gas station.

True, there are very advanced electronic technologies (PIGS) that can be put down pipe to identify weak spots, dents, corrosion and leaks, but men, backhoes and other equipment must be brought in to dig up your crops or your backyard to check or repair these vulnerabilities.

And as with your car, when it gets older there will be more and more repairs and more and more damage to your property and your cheque book.

Damage to driveways, fences, shelterbelts, crops, topsoil, pastures, lawns. Disruption of your business, your home life, your peace of mind and enjoyment of your property. All will be casualties of a deteriorating pipeline mismanaged by Ottawa.

Things could get pretty chaotic without the protection of a CAEPLA contract covering integrity digs.

Under new laws I mentioned above, the Minister of the Environment can make agreements with “Indigenous governing bodies,” giving such bodies authority over private property.

Perhaps Allan, who I also mentioned earlier, can serve as a case study.

I met Allan about six years ago. We’ve become friends and he is a great supporter of CAEPLA.

He lives on land he bought to build a house on and to use as recreational property. It is covered with trees, trails and wildlife, and is great for hunting. It also happens to have a few pipelines on it.

His first encounter with pipeline workers is another story in itself, which he himself can tell another time.

He’s a smart guy — some would consider him an "SOB." He talks and plays tough, always has. He didn’t much like the way companies treated him when he first bought the property.

He searched the internet for help and found CAEPLA.

He says that talking to and meeting the folks at CAEPLA has been one of the best things that happened to him. I did my best to help him understand the ins and outs of pipelines, landowners and the NEB.

I told him he needed to look at the property as a pipe farm. And as such he needed to treat it as a business, not an inconvenience.

With CAEPLA’s help his property is now a profit centre, his land is producing.

His theory now is that these companies are making billions of dollars for their shareholders and as such he should be treated with respect and sharing in those profits — like any other business partner.

He realizes that without CAEPLA he and other pipeline landowners would still be only getting damage, frustration and next to nothing for compensation for the pipelines on their property.

If you are a TMX landowner, you know where to find us. 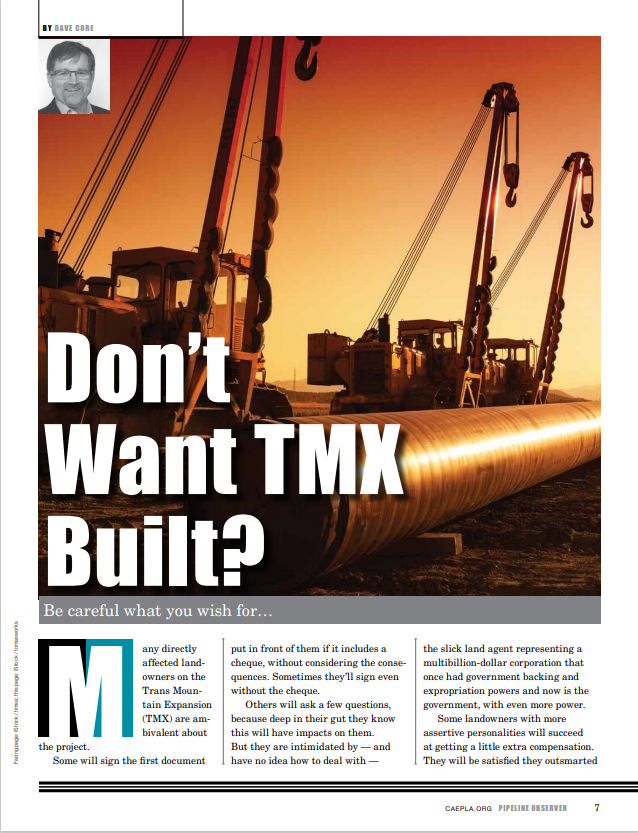 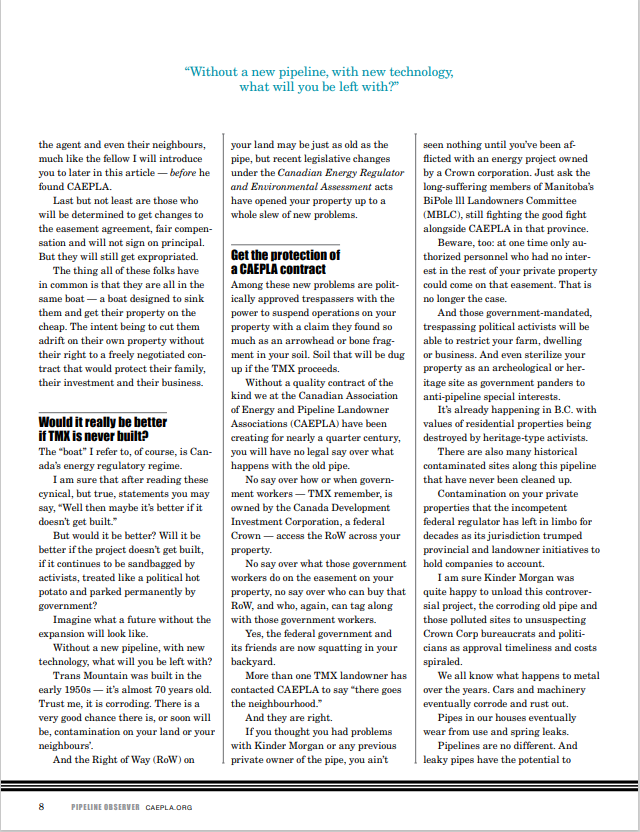 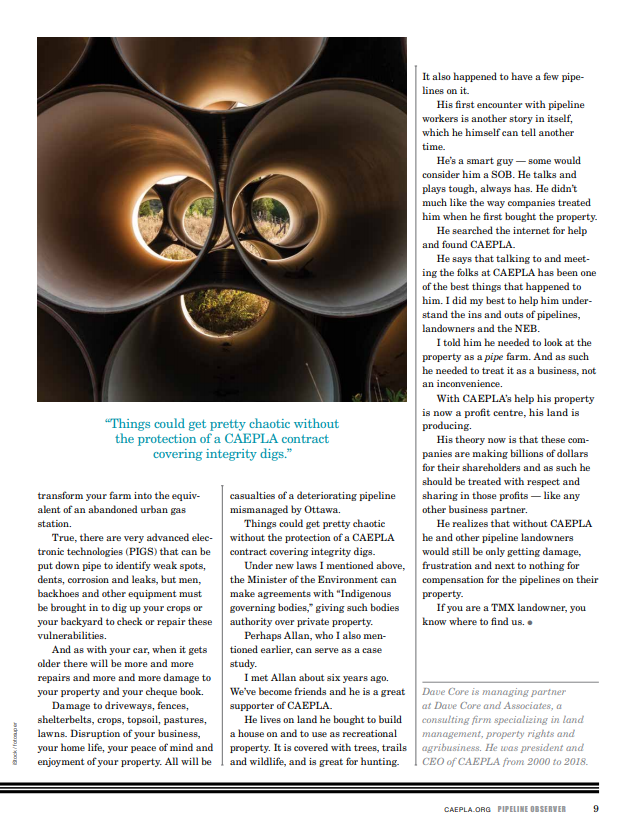