Don't 'Modernize' the National Energy Board

CAEPLA on Breaking Away From NEB Bureaucracy

If you want to get pipelines built, get bureaucrats out of the land acquisition business.

The bottom line is, you can’t ‘modernize’ a bureaucracy that is itself a 19th-century anachronism.

What “modernize” means to the Trudeau government is hard to say. Our suspicion is it will mean whatever they want it to mean, but we’re not sure even they know what that is yet. But if modernize means change for the better, they are not off to a very good start.

There is a cliché about doing the same thing over and over again and expecting a different result. That describes the energy board modernization campaign so far.

Ottawa is circulating a “discussion paper” on the subject seeking feedback from “stakeholders.” But the questions being asked are the same old, same old – they have been asked and answered dozens of times over the decades. Including multiple times in the last couple of years by CAEPLA.

In fact, the series of questions is very much like the “push polls” that have been so discredited in the political arena in recent years – the questions are asked in such as way as to skew the outcome to suit the people doing the asking.

You can take a look at the questions below from the “Land Acquisition and Compensation” section.

Which is what the NEB has always done. Nothing new here.

Nor is it in any way a new approach to ignore feedback from the only real stakeholders (apart from industry and people living near energy corridors) – farmers and ranchers, and woodlot, acreage and other rural landowners.

Let’s take a look at a few of the questions.

“How has having a pipeline or power line on your property affected how you use your land?”

The NEB has literally stacks of testimony from landowners going back decades that answers this question. The fact Ottawa is using more of your tax dollars to ask this question for the umpteenth time is mind-boggling to say the least.

Question 4 asks “who should make the final decisions for land compensation disputes?”

This is the best example of the push-poll type question.  It’s dishonest.

What they mean by “land compensation dispute” is when a landowner disagrees with the amount offered as compensation after his or her land has been taken or targeted for expropriation by the NEB for a linear project.

Out in the real world, where we still have some semblance of a free market, “land compensation disputes” are pretty easy to resolve.

If somebody makes a lowball bid on your car or piece of farm machinery, you counteroffer or say “no thanks.”  Problem solved.

If someone offers less than you are asking for your home or farm business, same thing. No third party is required.  And for darn sure no assistance is needed from bureaucrats who at best have no skin in the game and at worst are in a conflict of interest.

Number 6 is just flat out absurd.  I have never met a landowner who is anything other than irate about government authorizing Right of Entry without consent in cases where there is no agreement.

How would they feel if a government bureaucracy handed use of their property over to a would be buyer without their consent?

Number 7 has also been asked and answered a hundred times.

The answer could not be more simple:  Freely negotiated sales or lease agreements. And thanks, but no thanks – “direction from the Government of Canada” would not be helpful.

Expropriation is never OK, or even necessary. As we have written many times in past issues of the Pipeline Observer, there are always alternatives.

Today’s pipeline companies also employ state-of-the-art engineering technology. The ability to go under or bend around the tiny number of holdouts or obstructers is greater than ever.

There are also land assembly strategies – options – that can be used to acquire land in a way that prevents some landowners – again, a small minority – from attempting to hold a project hostage to unreasonable demands.

Other ideas we would like to see adopted include incentives from government.

And we are not advocating subsidies here. What we are suggesting are tax breaks.

Other than the companies themselves, nobody makes more off a pipeline project than governments via taxation. In fact, if energy transport is anything like the gasoline or tobacco industries, we would not be surprised to learn government takes the most.

Whatever the case, governments could incentivize landowners to partner with companies and get projects built fast and affordably by detaxing the property needed.

Property, school, business, and any other taxes attached to required land could be removed by all levels of government profiting from a project.

The bottom line is, you can’t “modernize” a bureaucracy that is itself a 19th-century anachronism.

If you want to make change for the better at the NEB, get the bureaucrats out of the land acquisition business.

But you will never arrive at that conclusion by putting out push-poll discussion papers — and ignoring directly affected landowners by holding dog-and-pony shows in urban centres. 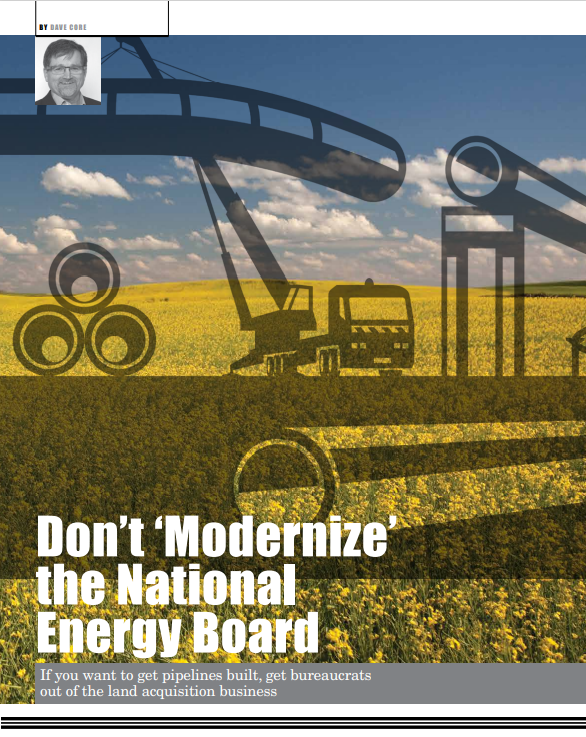 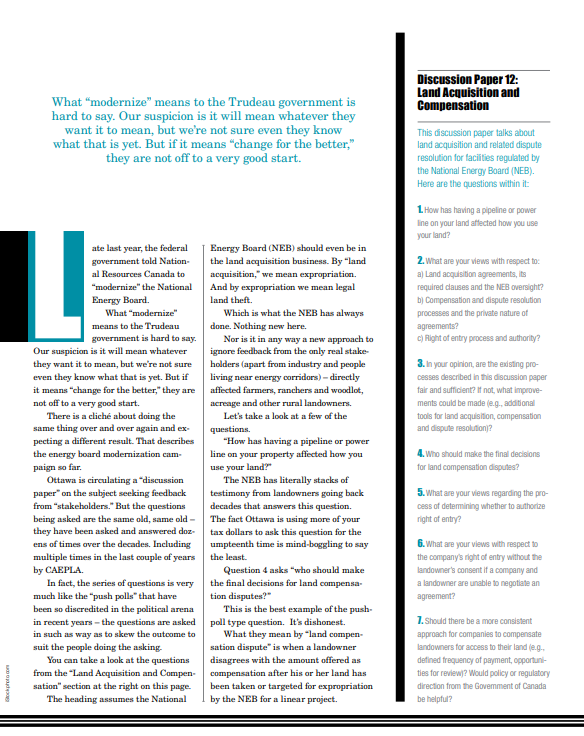 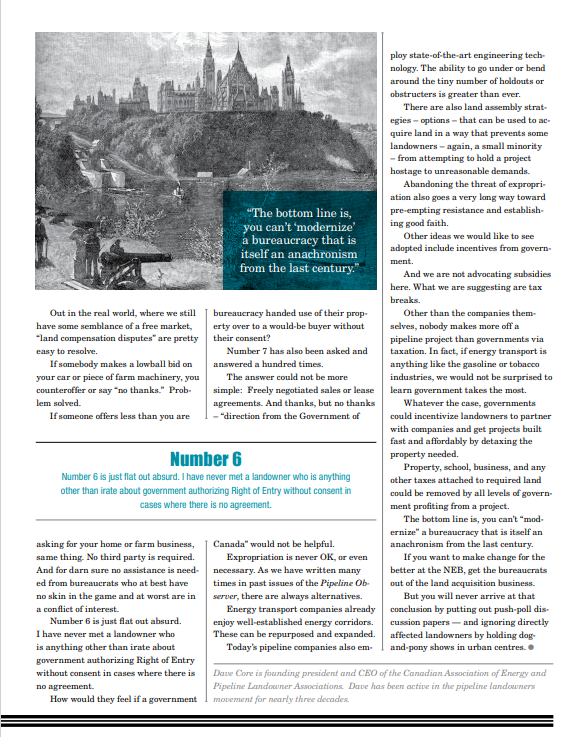