Does the National Energy Board serve the public interest?

Is that even possible?

"It’s questionable whether the NEB even helps the energy industry overall. It delays and interferes with good projects, and gives weight to numerous arguments from groups that are not legitimate stakeholders."

“Regulating in the Canadian public interest means factoring economic, environmental and social considerations into our decision-making process. By considering all the evidence that is presented on the record through the lens of these factors, the Board is able to make decisions that represent the ever-evolving interests and concerns of Canadians.”

— The National Energy Board’s responsibilities, according to the board itself

The pipeline industry is remarkable, executing complex projects on a sometimes-massive scale, marvels of engineering and technical sophistication with the ultimate purpose of ensuring markets have access to cheap energy.

At the same time, the industry is one of Canada’s most contentious areas of debate. It is a nasty battleground where property rights, business, economics, environmentalism and various other interests clash over high stakes.

This makes the National Energy Board (NEB) and its regulation of pipelines a major source of interest to all stakeholders.

People expect regulators to act in the public interest. We are taught to believe that the market is mostly good but flawed. We need regulators to ensure the industry puts “people before profits” and keeps the abuses of big business in check.

Naturally this prompts the question: Who defines public interest?

The problem is that public interest is not a thing regulators can observe and know about. There are only individual interests with different goals and preferences, and the pretence of knowing what is good for others.

All too often we fail to remember that regulators are just people, with all their faults and biases. They do not gain special wisdom or insight merely by getting a position in an important regulatory body.

Regulating agencies are always fundamentally political entities and they tend to reflect the preferences of those with the most political clout. Unsurprisingly, that is often large corporations. The concern over “captured regulators” — regulators that act in the interest of the industry they are meant to regulate — is often not fully appreciated, and the NEB is hardly insulated from this problem.

The NEB recently made headlines because hearings on the Trans Mountain Pipeline Expansion project had to be postponed. The reasons why are instructive.

It turns out the newest board appointee was Steven Kelly, vice-president for IHS Global, a firm hired to provide analysis for Kinder Morgan. Yes, that is the same company petitioning for the pipeline expansion. Kelly himself wrote the 67-page document providing economic evidence supporting Kinder Morgan’s position on the Trans Mountain project.

While this conflict is rather blatant, it’s actually illustrative of the NEB’s general problem.

Kelly is really not the issue by himself. The entire composition of the NEB raises concerns about its impartiality and its ability to serve the “national interest.”

Consider the current organization of the NEB. At various levels, the regulator is an assortment of executives and consultants from industries regulated by the NEB, corporate lawyers with extensive energy industry connections, central planners drawn from various regulatory agencies— and overall, numerous people whose networks include the organizations that are supposed to receive impartial treatment.

One cannot overlook the personal side of things. When tracing out different connections, people always find the business world is an astonishingly small place. There are webs of friendships and professional linkages. The regulators and the regulated may have worked together previously, or they might attend the same social functions, put their kids in the same private schools, golf at the same country clubs and so on.

The members of the NEB want to be seen as “doing the right thing” among their peers so they can be considered for other positions in the future, whether corporate board directorships, executive and consulting roles or other well-paid, high-level regulatory jobs.

All involved want their team running things at the NEB. Obviously, the pipeline industry wants to be represented, as do those selling the product that needs to be transported.

On the other hand, landowners don’t want their legitimate rights sacrificed so that certain businesses can have their way. Many environmental extremists detest oil and the pipelines that deliver it, and would love to have more allies on the board to kill projects. Meanwhile, First Nations also want their values fairly considered. And so on.

What is the solution? There might be no rational way to decide what the NEB should look like. Should it have more marine biologists? Should it have more tort lawyers? More Aboriginal people? More energy industry professionals? Should property rights get a higher priority? Why or why not? For regulators, these questions are answered by institutional incentives rather than real considerations of efficiency and justice.

Despite complaints over how this or that government has contaminated the NEB with an unspoken favouritism, nothing has really changed. As a relic of the wartime planning mentality, the NEB’s origins are tainted by the same political decision-making that characterizes its activities today.

It started in 1957 with a government commission, as these things usually do. The goal was figuring out a way to juggle competing interests between politically connected international oil producers and less-influential Western Canadian producers. Some wanted a pipeline from Edmonton to Montreal, while other interests preferred that Alberta export to the U.S. and Eastern Canada be supplied from abroad. The commission, full of appointees with predetermined conclusions, elected to favour non-Canadian interests.

Furthermore, despite appearances, it’s questionable whether the NEB even helps the energy industry overall. It delays and interferes with good projects, and gives weight to numerous arguments from groups that are not legitimate stakeholders. When it favours some interests, what alternatives are foregone?

If the NEB’s decisions are largely political, then its decisions are not about what is most efficient for energy markets, but instead who has the most influence. This raises the danger of a future government loading the NEB up with radical environmentalists or people who want to crush the oil and gas industry.

We also need to ask why the provinces can’t figure out their own pipeline issues. If the Northern Gateway route only touches Alberta and B.C., why can’t it be resolved between those two provinces? Why should a biased federal regulator have the power to interfere?

Canadians should start questioning the role of the NEB, so that the strength of the pipeline industry and the legitimate rights of stakeholders can be harmonized. As it stands, the NEB is wholly unsuitable when, more than ever, we require efficient energy markets that serve everybody. 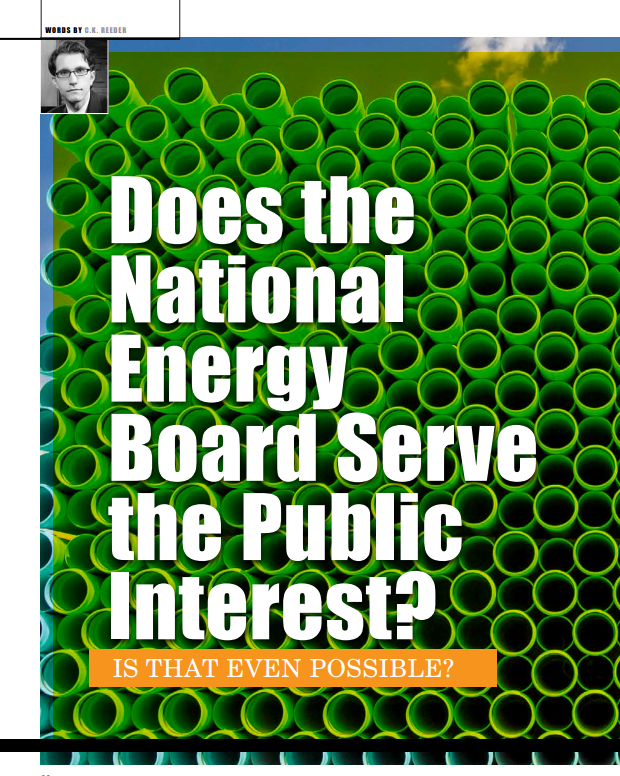 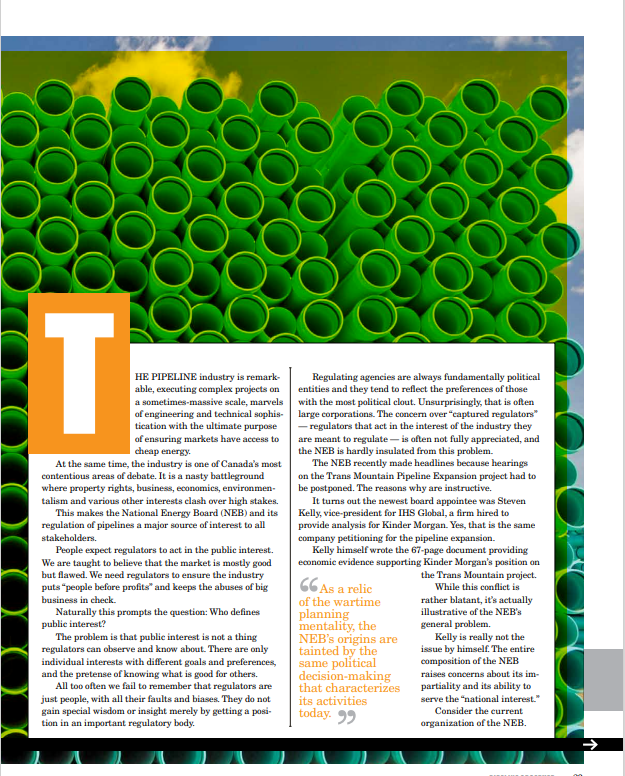 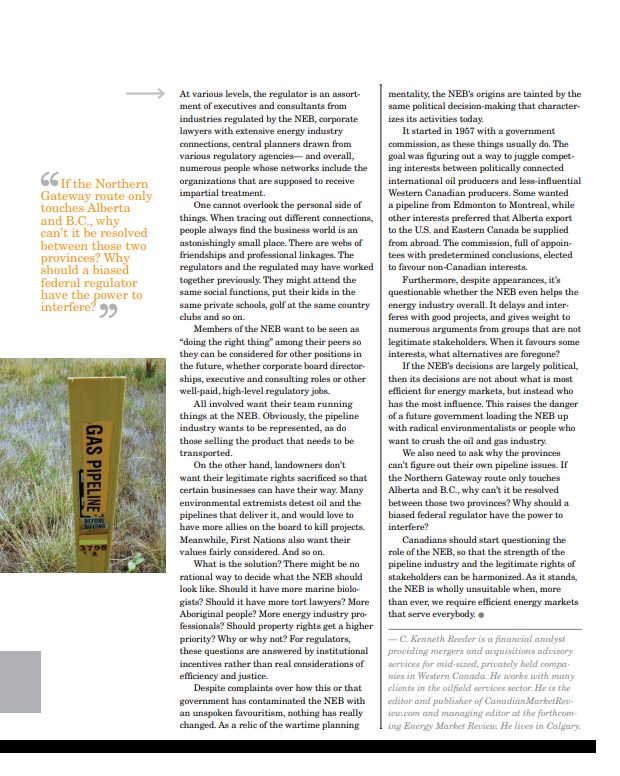 — C. Kenneth Reeder is a financial analyst providing mergers and acquisitions advisory services for mid-sized, privately held companies in Western Canada. He works with many clients in the oilfield services sector. He is the editor and publisher of CanadianMarketReview.com and managing editor at the forthcoming Energy Market Review. He lives in Calgary.