Do We Still Need the National Energy Board?

Canada was building pipelines long before we ever regulated them

The Trudeau government has talked a lot about “modernizing” the National Energy Board (NEB) and restoring confidence in how major energy projects get reviewed and approved. A recent protest at the NEB’s Energy East hearings in Montreal is yet another illustration of why that’s probably impossible.

Back in August, a corpulent protester and his entourage barged into the NEB’s public hearing and caused a “violent disruption.” They were removed by police.

Apparently these protesters thought the NEB panel was suspect because two members had met with former Quebec premier Jean Charest while he was working as an energy industry consultant. No one seems to know what was discussed in that meeting, but the disruption was effective—the NEB cancelled a week of further hearings.

Then about 10 days later, the NEB submitted to criticism and all three members of the Energy East panel stepped down. This was to “protect the integrity” of the National Energy Board and Energy East review.

The interesting part of all this is how it doesn’t even matter whether the protesters’ complaints were motivated by a genuine scandal or desperation to seize on anything that can stop pipeline construction altogether.

Meaning it’s obvious a lot of people have trust issues with the NEB, which is perceived to be subject to political interference at every turn.

Landowners are caught in the middle—they either get bullied by the NEB or get stuck with older, less safe pipelines crossing their land because environmentalists impede modernizing upgrade projects (as is the case for the Enbridge Line 3 replacement). They certainly don’t trust the NEB at all.

How do you restore public confidence in the NEB?

“The NEB is an anachronism born from the wartime central planning mentality. It really has no purpose in the modern world. The lack of trust in its review processes is a symptom of that.”

The main challenge of democracy is having good institutions and decision-making processes. More than that though, we want institutions and processes that tend to produce good outcomes. Due to whatever biases we have, we tend to be suspicious of an institution that produces results we dislike, even if it should be a good system in theory.

This is an intractable problem, but the lesson to be learned here is not that we need to restore trust in the Board, but instead energy infrastructure decisions should be more local with less involvement from Ottawa.

The best way to “restore trust” in how major energy projects are evaluated is to remove unnecessary federal interference and keep the decision process linked to legitimate stakeholders—property owners, energy companies and provincial and local governments.

The NEB itself is unnecessary. It uses its elaborate “consultations” and “reviews” to apply a veneer of legitimacy to a process that doesn’t need the extra layer of bureaucracy.

Every additional step of federal approval actually opens the door for more political interference by one group or another. The very existence of the NEB creates distrust.

Canada’s Constitution gives Ottawa the power to make laws and regulate interprovincial and international projects like big pipelines. That doesn’t mean they actually have to exercise that power the way they do now.

Remember, the NEB doesn’t really approve anything. It simply makes recommendations to Ottawa about whether the government should permit a project after the NEB’s review.

Ottawa could have a streamlined process to approve something that the provinces want based on their own consultations and processes.

The NEB was created in 1959, but Canada has had pipelines for over 150 years. Unsurprisingly, pipelines that crossed provincial and international borders were still built before the NEB existed and the world didn’t fall apart.

The NEB is an anachronism born from the wartime central planning mentality. It really has no purpose in the modern world. The lack of trust in its review processes is a symptom of that.

People’s distrust of government institutions seems higher than ever. Ottawa believes that it’s possible to “overhaul” the National Energy Board and regain public trust. But if we’re honest with ourselves we see there is no practical way for that to happen. 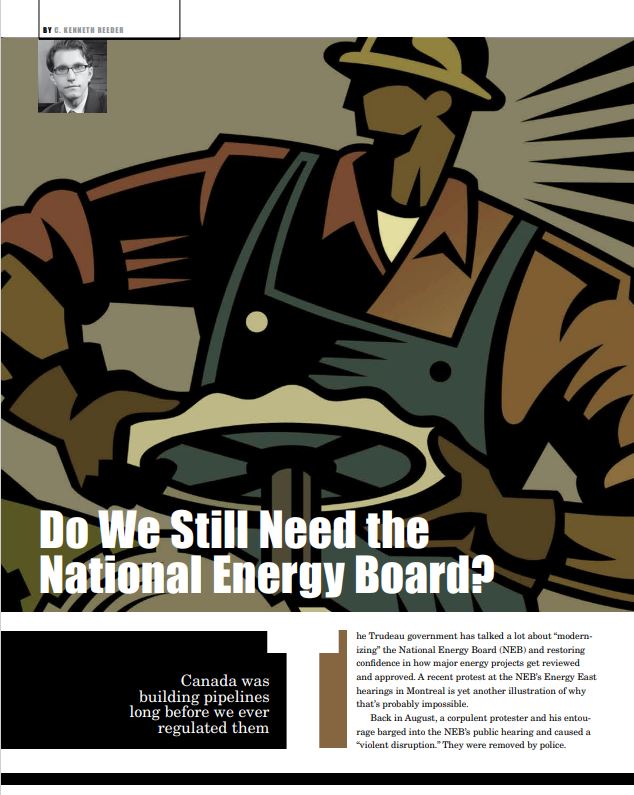 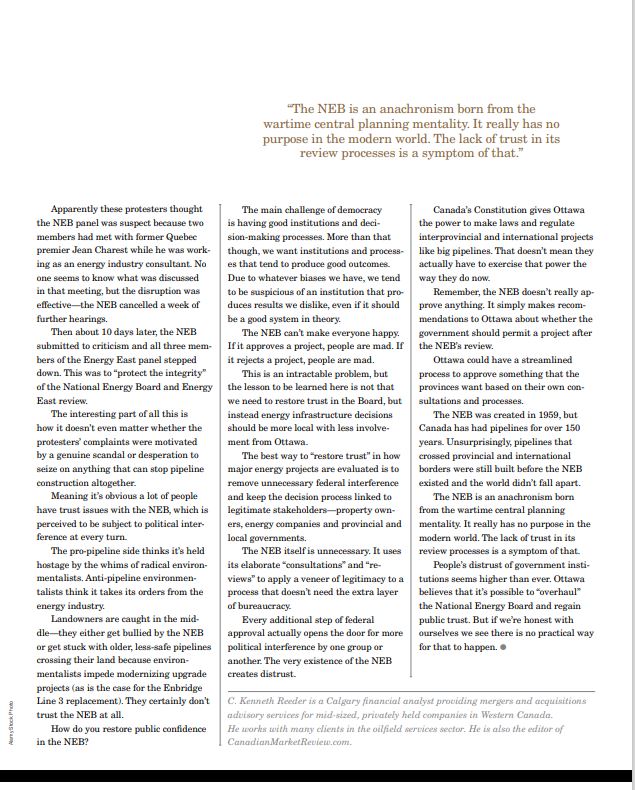