Did Canada buy an oil pipeline in fear of being sued by China?

Why is Justin Trudeau buying a pipeline?

Canada’s government announced yesterday it was planning to purchase the Trans Mountain pipeline for $4.5bn. This pipeline – which transports oil from Alberta’s tar sands to the western coast of British Columbia – is at the centre of a bitter political war that shows no signs of abating.

Standing in opposition are the government of British Columbia, the environmental movement, coastal communities and many indigenous groups. Collectively, they’re alarmed about the possibilities of oil spills and exacerbating climate change.

Pressing for the pipeline is the oil industry and the governments of Canada and Alberta – whose premier, Rachel Notley, crowed after the decision: “Pick up those tools, folks, we have a pipeline to build.”

By buying the pipeline from its current owner, Kinder Morgan, Trudeau’s government could face a price tag much larger than $4.5bn if the government wants it actually built. The Financial Post has suggested that finishing the new expansion would cost an additional $6.9bn.

Trudeau’s ferocious desire to build the pipeline at any cost seems bizarre on the face of it. Ostensibly, his government claims the pipeline is good for the Canadian economy. But the pipeline will be shipping unrefined oil – known as bitumen – to be refined in the US and Asia. This will cost oil refinery jobs in Canada, which is where most employment in the oil industry exists. Canada has been closing refineries for years now. The pipeline will only accelerate this trend.

Moreover, developing the oil sands ensures Canada will never come close to meeting its commitments to the Paris climate accord. In 2015, Trudeau promised to cut emissions dramatically: 30% from 2005 levels by 2030. But most of the oil in Alberta’s tar sands will have to stay in the ground to prevent a global warming catastrophe.

So what’s going on?

The logic to Trudeau’s action may lie in an obscure and often overlooked agreement called the Canada-China Foreign Investment Promotion and Protection Agreement (Fipa).

This agreement, ratified in 2014, was negotiated by the previous Harper government. It was passed without a vote in Parliament. Fipa, which remains in place until 2045, was signed to ensure that China got a pipeline built from Alberta to BC, among other benefits.

By then, China was already investing heavily in the oil sands. In 2009, PetroChina bought a 60% interest in two undeveloped oil sands projects, containing an estimated 5bn barrels of oil. And in 2013, the Chinese state-owned CNOOC purchased the third-largest Canadian oil and gas company, Nexen, for $15.1bn. China needs the oil to help fuel its industrial growth.

Yet this Fipa is the sort of agreement that undermines the sovereignty of nations to the benefit of private interests. Fipas are Canada’s name for bilateral investment treaties, which are frequently used by corporations around the world to challenge public policies or community decisions that interfere with their ability to make money. Canada’s first Fipa took the form of a single chapter in the North American Free Trade Agreement (Nafta). Since then, Canada has paid out $160m to US corporations who challenged public decisions, including environmental policy. Canadian mining companies are using Fipas with developing countries to claim damages from community opposition to unwanted mega-projects.

In the case of the Fipa with China, it notably allows Chinese energy companies to challenge local, provincial and federal policies or laws that interfere with their “right” to make a profit from energy projects. So any environmental regulations, or halted pipelines, or First Nations land claims, could be subject to lawsuits brought by Chinese corporate interests. (Conversely, Canadian companies operating in China have the same rights to do the same thing over there.) A clause in the Fipa, called Investor State Arbitration, gives them this capacity.

“More troubling, there is no requirement in the treaty for the federal government to make public the fact of a Chinese investor’s lawsuit against Canada until an award has been issued by a tribunal,” Osgoode Hall international investment law professor Gus Van Harten has noted.

“This means that the federal government could settle the lawsuit by paying out public money before an award is issued, and we would never know.”

This is no small threat: a few years ago, a Chinese insurance company launched a $2bn arbitration claim against Belgium under a foreign investment protection treaty.

And in 2016, the energy giant TransCanada sued the US government for cancelling the Keystone XL oil pipeline. TransCanada was seeking $15bn.

Trudeau is desperate to keep China happy. In 2016, his government began negotiating a free trade agreement with China. At the time, the Globe and Mail reported, “a senior Chinese official said this will require Canadian concessions on investment restrictions and a commitment to build an energy pipeline to the coast”.

Less than a year later, Trudeau approved the expansion of the Trans Mountain pipeline. Talks for the free trade agreement are ongoing.

Now he has bought that pipeline, and will have to live with the political fallout, which will likely include protesters, court cases and other acts of civil disobedience. In what might be a strategy to avoid lawsuits from Chinese companies that may result in massive secret payouts, Trudeau’s government may find itself arresting Canadians. 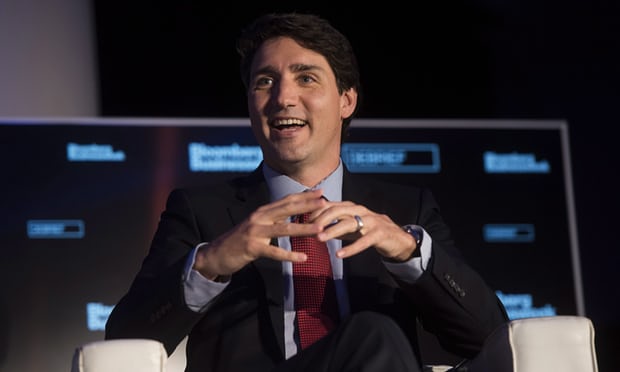 … we have a small favour to ask. More people are reading the Guardian than ever but advertising revenues across the media are falling fast. And unlike many news organisations, we haven’t put up a paywall – we want to keep our journalism as open as we can. So you can see why we need to ask for your help. The Guardian’s independent, investigative journalism takes a lot of time, money and hard work to produce. But we do it because we believe our perspective matters – because it might well be your perspective, too.

I appreciate there not being a paywall: it is more democratic for the media to be available for all and not a commodity to be purchased by a few. I’m happy to make a contribution so others with less means still have access to information.Thomasine, Sweden

Thank you to the many people who have already supported us financially – your contribution is what makes stories like you’ve just read possible. We increasingly need our readers to fund our work so that we can continue holding power to account and producing fearless journalism.

For as little as £1, you can support the Guardian – and it only takes a minute. Thank you.