Cows Save the Planet

This excerpt is from Judith D. Schwartz’s book Cows Save the Planet: And Other Improbable Ways of Restoring Soil to Heal the Earth (Chelsea Green Publishing 2013) and is reprinted with permission from the publisher.

Cows saving the planet? Why not? An idea that sounds preposterous begins to make sense if we stop to take a soil’s-eye view of our current environmental predicament. To crouch down to ground level—literally or metaphorically—and see how human and animal activity enhances or does violence to that fine earthy layer that hugs our planet. To appreciate the imperceptible animal–vegetable–mineral dance that keeps us alive.

You see, that brown stuff we rush to wash off our hands (or, depending on our age, our knees) is the crux of most biological functions that sustain life. Soil is where food is created and where waste decays. It absorbs and holds water; or, if exhausted of organic matter, streams it away. It filters biological toxins and can store enough carbon to reduce carbon dioxide levels significantly and relatively quickly. It is home to more than 95 per cent of all forms of terrestrial life. In any given place the quality of the soil greatly determines the nutritional value of food, how an area weathers drought or storms, and whether an ecosystem is teeming with life or the equivalent of a ghost town.

Where do those cows fit in? Cattle, like all grazing creatures, can, if appropriately managed, help build soil. When moved in large herds according to a planned schedule, livestock will nibble plants just enough to stimulate plant and root growth, trample the ground in a way that breaks apart caked earth to allow dormant seeds to germinate and water to seep in, and leave dung and urine to fertilize the soil with organic matter (aka carbon). The result is a wide variety of grasses and other deep-rooted plants and rich, aerated soil that acts like a great big sponge so as to minimize runoff and erosion. (Cows and their eruptive digestion habits have gotten a bad rap of late—I’ll address the methane question in chapter 1.) The use of ungulates such as cattle in land restoration, a practice called Holistic Management, was developed and refined over the decades by Allan Savory, a farmer and rancher and former opposition leader to then-Rhodesia’s white government. With cows or other grazers operating under Holistic Management across large areas of degrading land, this could mean a great deal of soil created or preserved.

"Fortunately, a host of creatures underfoot are ready to make and enhance soil for us—once conditions are right. This is where that microscopic choreography comes in; the cows (or the diggers of holes) are only the catalyst."

Leaving behind our bovine herd for the moment, another way to build soil is through zai pits, a traditional growing method from Burkino Faso in West Africa. Small holes are dug into a field, and these capture water and hold soil organic matter (compost and such), both precious resources in drylands that depend on seasonal rainfall—about a third of the world’s landmass. Cattle have a similar impact. Rancher and consultant Jim Howell told me that this helped Grasslands, LLC’s, South Dakota ranches withstand the spring 2011 torrential rains while nearby properties suffered losses: The herds left hoof-size pockets in the ground, so water pooled rather than forming gullies and eroding the land.

If you’re wondering why we want to build soil—isn’t there enough dirt out there already?—consider this: Around the globe, we’re losing topsoil somewhere between ten times (in the United States) and forty times (China and India) faster than we’re generating it, some eighty-three billion tons of it a year. Soil is pounded off fields during a rainstorm; it runs down our rivers; its surfaces are over- and undergrazed; when left uncovered it loses its organic matter as carbon oxidizes and enters the atmosphere. Despite our collective societal indifference to soil, we’ve all got a large stake in its fortunes. In an oft-quoted and paraphrased line, “Man has only a thin layer of soil between himself and starvation.” Up to now, we’ve been heedless with our soils. And we’re paying the price.

On an immediate, day-to-day level, the food we eat is only as good as the soil from which it springs. In part because of soil depletion, most food grown today is less nutritious than that of most previous eras. Research from the UK Ministry of Health determined that a steak today has half the iron of its counterpart fifty years ago thanks to changes in what the animals eat. Breeding crops for high yields accelerates the dilution of nutritional content. Over time this can lead to nutrient deficiencies, which a grower may not notice until the effects on the plants are visible, by which point the situation has become extreme.

Remember the adage “An apple a day keeps the doctor away”? Over the last eighty years, the calcium content of one medium apple has dropped by nearly half, and levels of phosphorus, iron, and magnesium have fallen more than 80 percent. So to get the same doctor-avoiding kick, you’d now need four or five apples. And this is fruit straight from the tree; processed foods also lose nutrients en route from the field to box or bottle. Some scientists believe today’s high obesity rates are, paradoxically, a symptom of malnutrition due to diets deficient in micronutrients. Which prompts the question: Could the declining nutritional content of our food also be a factor in our rising rates of chronic diseases and allergies, particularly food allergies among children?

Fortunately, a host of creatures underfoot are ready to make and enhance soil for us—once conditions are right. This is where that microscopic choreography comes in; the cows (or the diggers of holes) are only the catalyst. Worms, insects, and microorganisms like fungi and bacteria aerate the ground, decompose waste, exchange nourishment (mycorrhizal fungi take glucose from plants and in return help plants assimilate nutrients), and break down rocks into minerals like calcium, magnesium, iron, and zinc that are essential to our health. The herbicides, pesticides, and fungicides widely used in industrial agriculture kill many of these organisms; from the soil’s or soil dweller’s perspective, chemical additives are not such a great thing.

With zai, the organic matter in the hollows attracts termites. The termites, in turn, burrow around and create tunnels, allowing water to penetrate the ground rather than evaporate. Though usually regarded as pests, termites in marginal lands play much the same role that earthworms do in greener climes.

In Dirt: The Erosion of Civilizations, geomorphologist David Montgomery offers numerous cautionary tales of kingdoms, cultures, and empires that squandered their soil and found themselves with nothing left to live on. From the earliest farmers in the Fertile Crescent to the Mayans, Romans, and Easter Islanders, societies have exhausted their land either to scatter and regroup in much-diminished form, or to become lost to history.

Not that people didn’t know better. Advice about caring for soil has been passed along since the first primitive hoes broke virgin ground. Luc Gnacadja, executive secretary of the United Nations Convention to Combat Desertification, likes to quote this proverb from the Sanskrit Vedic Scriptures of around 1500 bce: “Upon this handful of soil our survival depends. Husband it and it will grow our food, our fuel and our shelter and surround us with beauty. Abuse it and soil will collapse and die, taking humanity with it.” More recently, in 1937 Franklin D. Roosevelt made the same point with a nationalistic twist: “A nation that destroys its soils destroys itself.”

Despite history’s warnings, the temptation to plant on fragile hillsides, clear forests, push yields of lucrative crops, or otherwise try to squeeze more from the earth proves too great. But today we can’t just pack up our tent and move to more promising turf while leaving the damage behind us.

It’s time to start treating soil as the precious resource it is. This doesn’t mean forgoing its bounty—soil is a renewable resource that can respond quickly to watchful stewardship. Since soil is integral to so many biological processes, nurturing and improving it provides us with many paths toward ecological renewal—with returns far greater than what you’ll see at your feet.  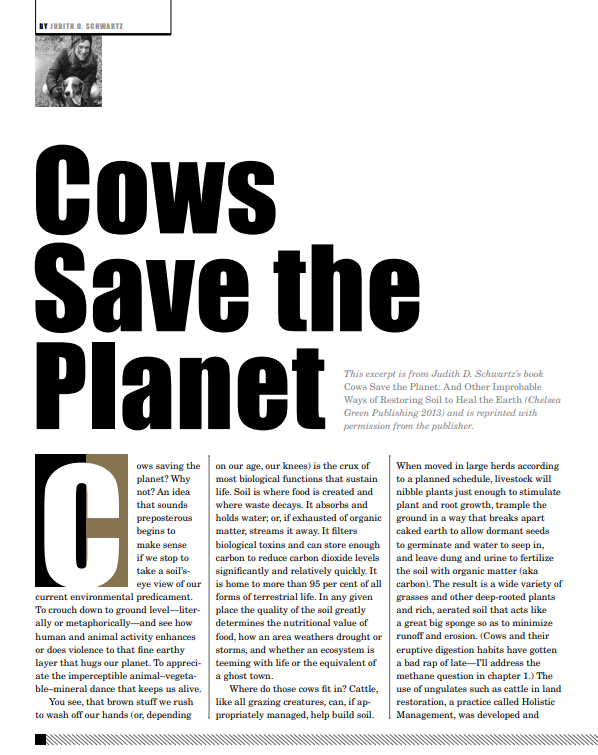 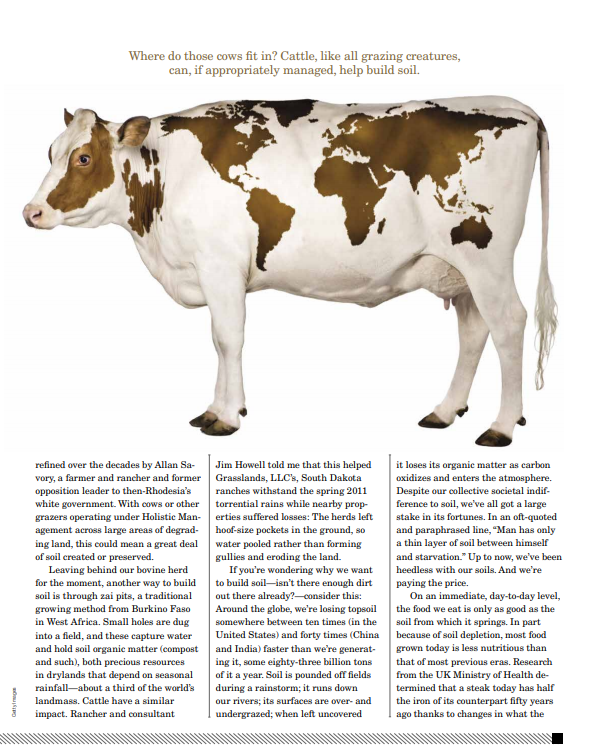 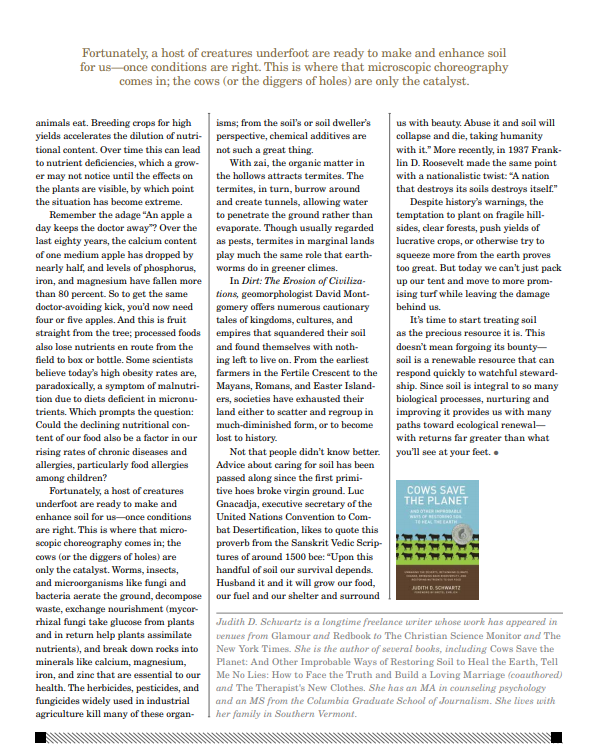 Judith D. Schwartz is a longtime freelance writer whose work has appeared in venues from Glamour and Redbook to The Christian Science Monitor and The New York Times. She is the author of several books, including Cows Save the Planet: And Other Improbable Ways of Restoring Soil to Heal the Earth, Tell Me No Lies: How to Face the Truth and Build a Loving Marriage (coauthored) and The Therapist's New Clothes. She has an MA in counseling psychology and an MS from the Columbia Graduate School of Journalism. She lives with her family in Southern Vermont.