Expropriation is still no way to get pipelines built, but repealing the Indian Act might be

Tom Flanagan is a political science professor at the University of Calgary and a conservative political activist known for his work with Stephen Harper in the 1990s.

He recently wrote an unfortunate piece in The Globe and Mail (September 10, 2018) about Canada’s pipeline situation. Specifically, the legal trainwreck that is Ottawa’s ongoing boondoggle: the Trans Mountain Pipeline and its expansion.

While his analysis of the Federal Court of Appeals ruling is sound for the most part, that’s arguably the easy part. It gets trickier when it comes to suggesting solutions, and that’s where Mr. Flanagan goes wrong.

When the Federal Court of Appeals quashed the National Energy Board’s approval of the Trans Mountain Expansion (TMX) in August, the primary issue was insufficient consultation with Indigenous groups.

Flanagan points out that, despite numerous Indigenous organizations endorsing the project, six others convinced the court that the consultation process was critically flawed.

It’s not clear to anyone what exactly it means for the Crown to satisfactorily carry out its “duty to consult.” The Indigenous groups don’t know. Industry doesn’t know. The government regulators, which represent the Crown and are tasked with upholding these duties, don’t know either.

Supposedly, the obligations were laid out in the Haida court decision from 2004. But surely anyone looking at these obligations must be struck by how vague they are.

This is all very touchy-feely, and Flanagan correctly points out that there is no concrete meaning to any of this. The duty to consult is just “whatever the courts say it is.”

As a result, this has effectively given a special veto power to Indigenous groups, many of which, along with their well-funded allies, engage in guerilla legal warfare to kill big projects like this.

Contrary to the common leftist illusion that Indigenous people are some uniform group with homogeneous interests, many bands desire the wealth and employment brought by major projects like TMX.

So, what is Flanagan’s proposal? He half-heartedly laments that Parliament has done nothing to legislatively clarify what “duty to consult” should mean, but he says it wouldn’t matter, as major corridor projects like TMX are challenging because unanimity is difficult to obtain.

Flanagan thinks the vital tool for these situations is expropriation. That is, having the government simply take the required land “in the public interest” and providing “appropriate compensation.”

This is not an uncommon position by any means. In fact, the expropriation proposition was echoed by Alberta Conservative Senator Doug Black. He suggested using the Constitution Act to expropriate the entire Trans Mountain pipeline corridor.

Flanagan admits that expropriation is not a perfect solution, but without it, modern civilization would be impossible.

This is what the pro-expropriation side always tells us. Without the government’s ability to forcibly take someone’s land, we are to believe that we’d all be living in the Stone Age. And what kind of fool would prefer the Stone Age to our wonderful industrial society? Case closed.

But just because it is in some cases difficult to get agreement doesn’t mean it’s impossible. Actually, the opposite is true. Companies tend to bid down the value of agreements because they know they have the authority of regulators to fall back on should their standard negotiations fail.

Expropriation is not required. The proposed Eagle Spirit Pipeline and the massive LNG Canada project show that cooperation among relevant stakeholders is certainly possible not only in theory but in practice.

Mr. Flanagan recognizes that Indigenous people essentially have no property rights, but rather a weird legal situation where everything revolves around collective action.
“[W]e have no equivalent legislation for First Nations’ property rights," Flanagan writes.

Quite true, and this is a massive problem in our country. But Flanagan handwaves the issue and proposes expropriation as a “get out of jail free card" for Ottawa’s pipeline project mess.

In any case, Flanagan’s point is confused. All reserve land is basically Crown land. The federal government can’t really expropriate its own land per se, it can just administer one way or another. That’s why there is this “duty to consult” instead of negotiations with individual Indigenous property owners. Expropriation is a cudgel that beats landowners, not Indigenous people.

The correct approach is not to have Parliament expropriate land to get major projects completed. This breeds conflict and resentment rather than unity and harmonization of different interests. And, given the historical conflict between the West and Ottawa, Flanagan might as well be calling for a foreign government authority to plunder Canadians.

The solution is more respect for property rights, not less.

But that means tackling one of Canada’s toughest issues of all. It would mean repealing the Indian Act (or at least dramatically amending it), abolishing the Department of Indigenous and Northern Affairs, opening up Crown land for appropriation and homesteading, and granting our Indigenous people real property rights like other Canadians.

At that point, there would be no “duty to consult.” There would be property owners and project builders negotiating and working together.

And that’s a real solution. 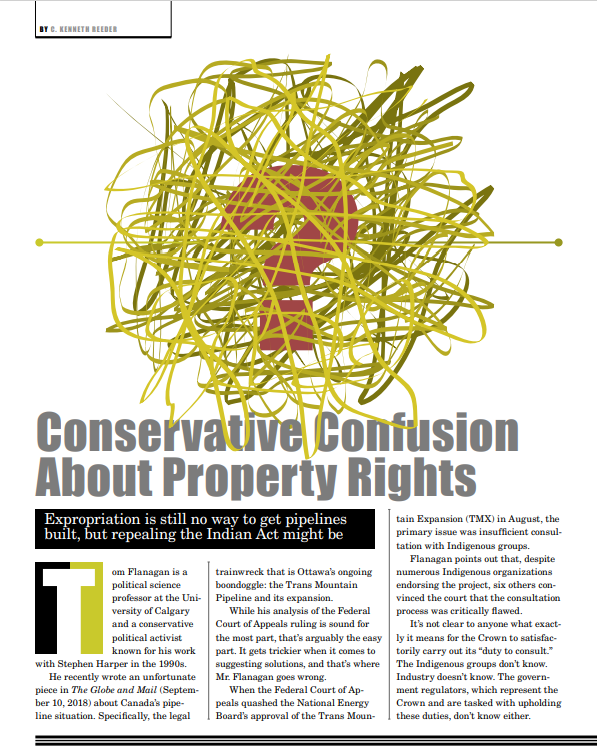 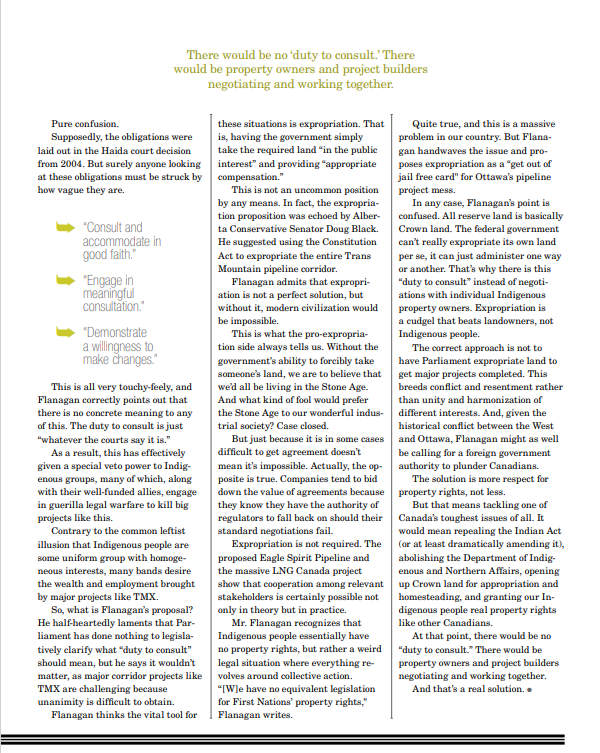 C. Kenneth Reeder is a Calgary financial analyst providing mergers and acquisitions advisory services for mid-sized, privately held companies in  Western Canada. He works with many clients in the oilfield services sector.  He is also the editor of CanadianMarketReview.com.