Why does everybody get a say on whether a pipeline gets built?

Justin Trudeau recently killed the Northern Gateway pipeline much to the disappointment of over 30 First Nation bands that were looking forward to the prosperity that would accompany having a pipeline crossing their property.

Why did Ottawa make this announcement? Why aren’t we hearing from Enbridge about what really happened?  How is it a political whim determines which pipelines live and which die, instead of allowing projects to compete and appeal to landowners on their merits?

The answer to this lies in Trudeau’s announcement that Kinder Morgan was going ahead while Northern Gateway was dead. “The Kinder Morgan pipeline will triple our capacity to get our product to market,” Trudeau said.

Did you catch it? It’s such a subtle and ingrained part of our psyche that it’s almost imperceptible.

Western Civilization was founded on the philosophy that the state is there to protect the individual not impose upon the individual. Yet here we have the federal government, with no pushback whatsoever from capitalists, calling a product extracted and refined by individuals other than themselves “ours.”

This collectivism infuses every part of the pipeline process. The idea that “we” get to decide whether a pipeline is built brings all sorts of “stakeholders” to the table that have zero ownership claim on land and property where the pipeline is going.

First Nations are treated as one homogenous blob rather than as a group of diverse individuals with different goals and desires and so it is proclaimed that the “indigenous people” don’t want a pipeline.

Our prosperity is not dependent on a particular pipeline getting built or another pipeline being prohibited. Our prosperity was built on a framework of property rights and respect for the individual — and collectivism undermines this.

If my great-grandfather who narrowly escaped Stalin taught me anything it is that we nationalize the means of production at our own peril.

Imagine if a pipeline company was able to negotiate with property owners free of government interference?

Clearly the pipeline company might have to work a bit harder to find a win-win solution for a few stubborn holdouts, but surely that would be a cheaper alternative than having to spend half a billion dollars seeking governmental approval only to have your project axed.

Surely both the pipeline company and the landowners would be better off not having collectivist insanity hanging over their heads and having their individual interests hinging on the opinions of people other than themselves. People who have nothing invested in their lives but who can ruin those same lives and their chance to pick themselves up out of poverty simply by registering a casual opinion.

One grain of hope in this madness are the people who are using collectivism against itself. Dave Tuccaro, from the Fort McKay First Nation, made his millions from oil and gas. And he smells opportunity. I spoke to him a few of years ago at a conference and he told me that he is planning to succeed where Enbridge has been obstructed by government.

It is going to be hard for a government that sees First Nations as a collective blob to say no to a First Nation company. I wish Mr. Tuccaro luck with his Eagle Spirit Energy Holdings initiative. We will all be better off if he is successful at turning collectivism against itself and exposing its corruption of Canadian society and economy. 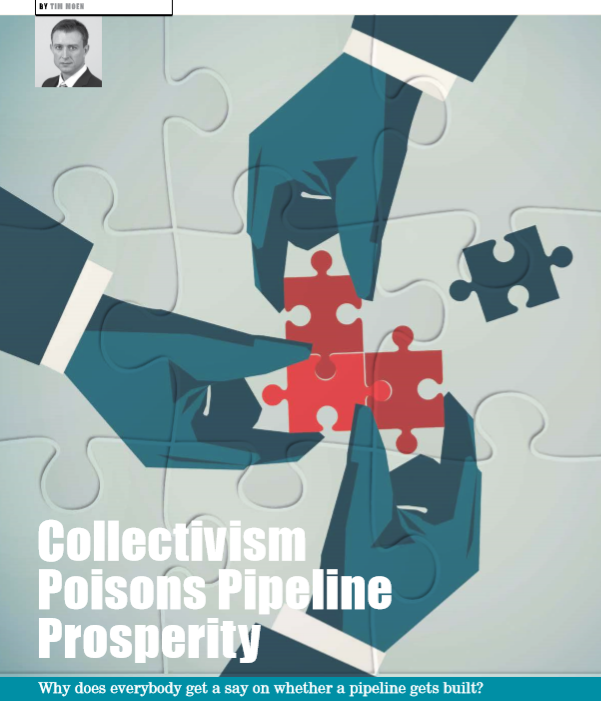 Tim Moen grew up on a farm in Northern Alberta.  Leader of the Libertarian Party of Canada, Tim is also a public speaker, filmmaker, businessman, and a firefighter/paramedic.