RCMP said officers were sent to the site after Coastal GasLink security reported it was under attack by about 20 people, some armed with machetes and axes

Violence has erupted at a Coastal GasLink pipeline work site in Northern B.C., leaving workers shaken and millions of dollars in damage.

Very early Thursday, just after midnight, Coastal GasLink security called RCMP for help, reporting it was under attack by about 20 people, some wielding axes.

RCMP Chief Supt. Warren Brown, commander for the north district, called the attack a “calculated and organized violent attack that left its victims shaken and a multi-million dollar path of destruction.”

Coastal GasLink said in a statement the attackers surrounded some of its workers in a “highly planned” and “unprovoked” assault near the Morice River drill pad site off the forest service road.

“In one of the most concerning acts, an attempt was made to set a vehicle on fire while workers were inside,” said the company in a statement. “The attackers also wielded axes, swinging them at vehicles and through a truck’s window. Flare guns were also fired at workers.”

The company said its workers fled. They were shaken, but no one was physically injured.

The attackers also cut equipment hydraulic and fuel lines, causing dangerous leaks. The company said it was working to contain the environmental impact.

Photos provided by RCMP showed the extent of the damage to the company’s and contractors’ equipment and property. At least two heavy excavators were toppled on to their sides, trucks were badly damaged and a portable office showed extensive damage to the exterior, with parts of its facade torn down.

After the attack, the attackers disappeared into the night.

RCMP said responding officers were met with a blockade of downed trees, tar-covered stumps, boards with spikes, and fires at the forestry road’s 41 km mark. As police worked their way past the debris, people threw smoke bombs and fire-lit sticks at them. One officer was injured.

At the drill pad site, about 12 kilometres further down the road, officers documented damage to heavy machinery, fencing and portables.

Coastal GasLink said the area was the site of a blockade last year that lasted 59 days.

The natural gas pipeline project has been the target of protests and opposition across Canada.

In November, a blockade erected by members of the Gidimt’en clan, one of five in the Wet’suwet’en Nation, left about 500 workers stranded near a pipeline work site.

Elected councils for several First Nations representing the Wet’suwet’en people have said they support the project, designed to carry natural gas to Kitimat for processing and export.

B.C’s public safety minister, Mike Farnworth, denounced the violence as an “egregious criminal activity” that could have led to serious injury or death.

“There is no excuse for such violence and intimidation,” he said in a statement. “All workers deserve to be protected from harassment and harm.”

“While we respect everyone’s right to peacefully protest in Canada, we cannot tolerate this type of extreme violence and intimidation,” said Brown. “Our investigators will work tirelessly to identify the culprits and hold them accountable for their actions.”

The RCMP is appealing to the public for assistance and asked anyone with information about the individuals involved to contact Houston RCMP at 250-845-2204. 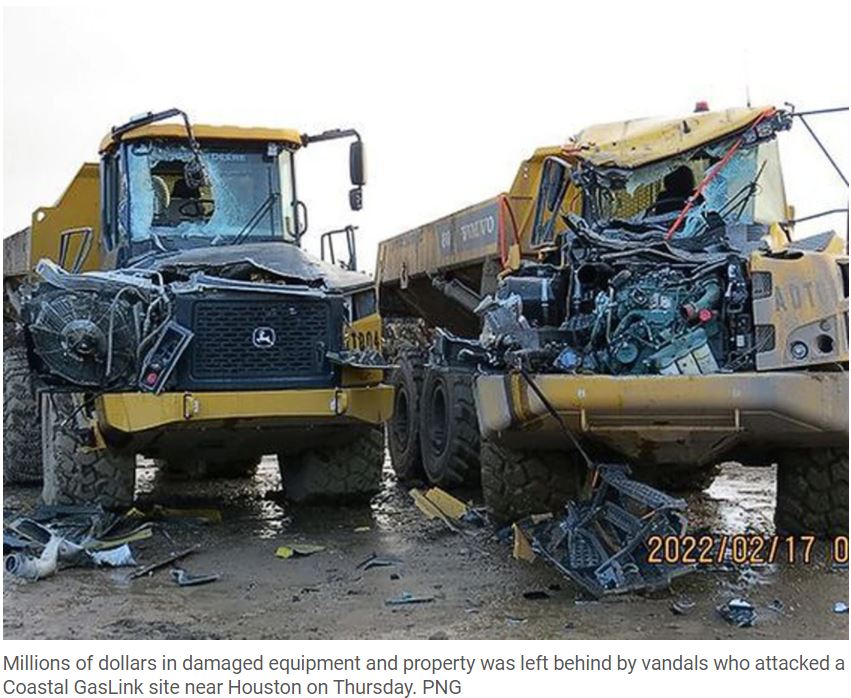