Changing of the Guard at CAEPLA

“I realize the challenges faced by landowners all come down to one thing: respect for your property rights – or lack thereof.”

“I urge all Alberta and B.C. landowners impacted by TMX to get in touch with us ASAP.”

May 1 [2018] brought a change in title and role for me at CAEPLA. Going forward, I will be serving you as Chief Executive Officer.

I will remain responsible for operations and always be only a phone call away. My new role will help me work more effectively with members, and will, importantly, free outgoing CEO Dave Core to focus on special projects and growth opportunities for our organization.

My involvement with a number of organizations en route to becoming CAEPLA CEO included on-the-ground contact with landowners, first with the Western Canadian Wheat Growers, then the Canadian Taxpayers Federation and also the Prairie Centre for Public Policy. All, I believe, helped prepare me to serve you the landowner better.

And working with you, the energy and pipeline landowner, at Canada’s leading grassroots property rights non-profit, feels like a natural career progression.

It has been an interesting journey. And about to get a whole lot more interesting. Another announcement in May almost certainly means change for Trans Mountain pipeline landowners of Alberta and B.C. And not for the better, but more on that in a moment.

My earlier experiences with those great grassroots organizations were about addressing issues that affect the families and businesses of farmers and ranchers all across Canada.

Speaking daily with the directly affected has helped me keep my finger on the pulse of landowners who are, after all, the real-world stewards of the land.

Farmers and ranchers face the uncontrollable and unpredictable reality of the weather. It affects every business decision—which may be why weather is always part of any conversation.

But when you have government regulations that are often even more unpredictable than the weather, it can have a direct and detrimental impact on your livelihood and business investment.

I wouldn’t have been able to put it into words back then, but as I reflect on the legitimate issues addressed with the organizations I have worked for over the years, I realize the challenges faced by landowners all come down to one thing: respect for your property rights—or lack thereof.

For decades, farmers challenged legislation that denied their right to sell their grain to whomever they wanted.

Certainly, some farmers didn’t mind the way things were, but for the farmers who simply wanted to make their own marketing decisions, good or bad, the freedom to do so was taken away.

Similarly, landowners approached for an easement across their property for oil and gas facilities, pipelines or power transmission lines do not have the freedom to negotiate their own business agreements on a level playing field.

Government power to expropriate, including forced right of entry, is packed in the back pocket of the company wanting access to your property—a fundamental infringement of property rights.

During the last decade, my understanding of property rights and what they mean to all of us has really grown. CAEPLA’s Pipeline Observer magazine has been very helpful in providing good information and fresh perspective on what your property rights are all about.

Property rights affect us all. The energy industry on whose behalf government so often suspends the property rights of landowners is now seeing its own property rights trampled at the bidding of anti-pipeline and anti-oil activists looking to kill projects.

Activists have gone so far as to trespass and sabotage company property, putting landowners and the public at great risk. So far, the consequences have been minimal.

Respect for property rights would go a long way to preventing the somewhat lawless scenario we find ourselves in now.

CAEPLA has never opposed development. Just the opposite, in fact—we have simply always insisted it be done ethically, meaning through respect for your property rights. A framework of respect also works for companies, and is the foundation of our win-win business agreement approach.

I believe the two should always work in harmony (which may be my experience working for the Regina Symphony talking).

In my time with CAEPLA, I have seen companies like Enbridge begin to embrace this perspective. Not all companies are as ready for positive change. But the phone calls the CAEPLA team takes at the office prove the contrast between landowners who feel they are treated with respect by a company, and those who do not.

And this is where things look to get more interesting for pipeline landowners, and not in a good way.

Kinder Morgan may not have been the most landowner-friendly or property-rights-respecting pipeline company in Canada. But compared to the new owner of TransMountain—the federal government—the company looks like pioneering property-rights philosopher John Locke.

CAEPLA has experience dealing with Crown-owned energy transport companies. Trust me: the worst-behaving private company is always more fun to deal with.

So it is indeed a new season at CAEPLA. A new era of nationalized pipelines and of new challenges for pipeline landowners.

Already we are getting calls asking what Ottawa’s ownership of Trans Mountain means for landowners—and I urge all Alberta and B.C. landowners impacted by TMX to get in touch with us ASAP. 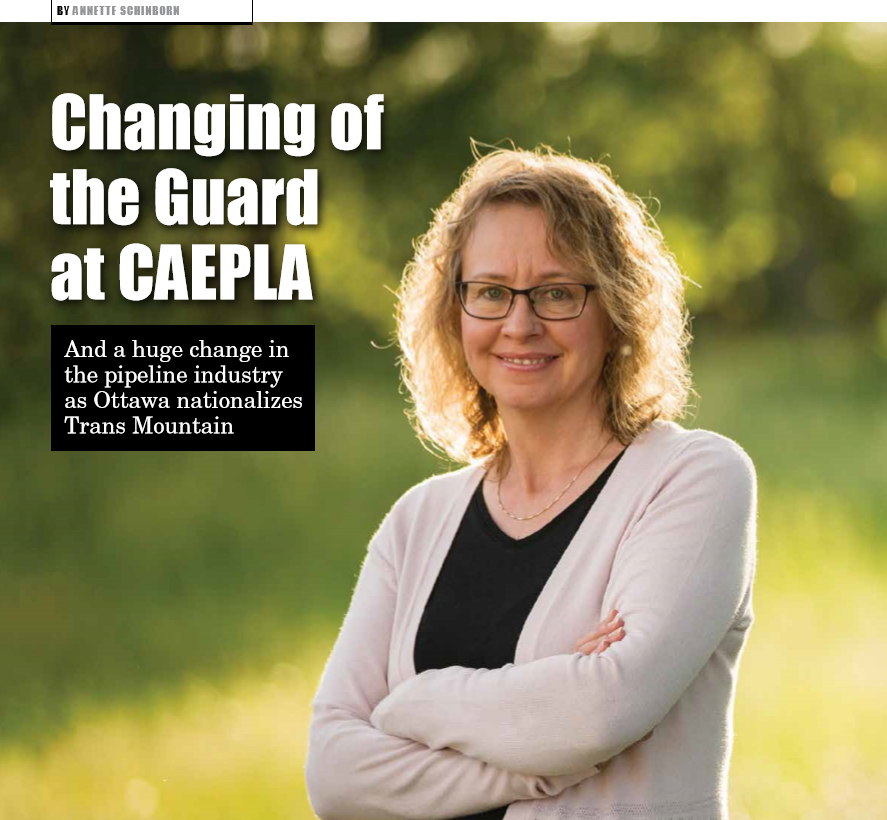 Annette Schinborn is Chief Executive Officer at CAEPLA, having served previously as COO and Director of Landowner Relations. Before joining the team at CAEPLA, Annette worked with grassroots nonprofits including the Canadian Taxpayers Federation, the Prairie Centre and the Western Canadian Wheat Growers Association. She has worked closely with farmers, ranchers and other landowners on issues such as tax and agricultural policy, energy transport and property rights.