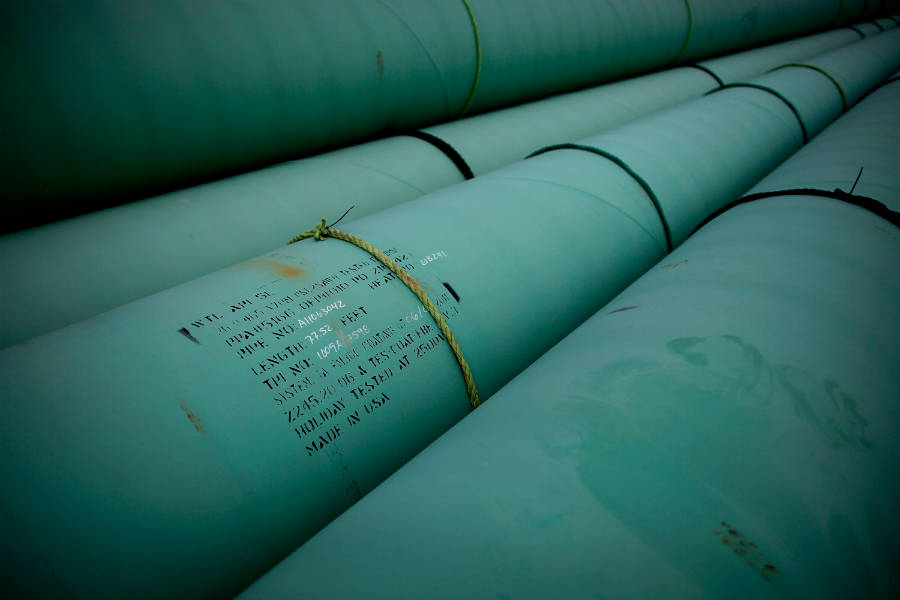 South Dakota regulators are worried that a construction problem suspected in the recent Keystone Pipeline oil spill could mean other sections of the pipeline—and the state's groundwater—are at risk. They reiterated their right to shut the pipeline down after federal inspectors suggested the company is likely to blame.

A preliminary assessment from the federal Pipeline and Hazardous Materials Safety Administration (PHMSA) suggests damage that occurred during TransCanada Corporation's construction of the pipeline was likely the cause of the spill.

TransCanada shut down the pipeline, which transports 590,000 barrels of tar sands crude oil and other forms of crude oil per day from Alberta, Canada, to U.S. refineries, after a leak was detected on Nov. 16. The leak, which spilled an estimated 5,000 barrels, or 210,000 gallons, of crude oil, was the third major spill from the pipeline in or near South Dakota since the pipeline began transporting oil in 2010.

Oil began flowing through the pipeline again Tuesday after PHMSA gave TransCanada a conditional green light to resume operations, albeit at roughly 80 percent capacity as part of a "corrective action order" sent to the company on Tuesday.

"This order finds that continued operation of the affected segment without corrective action is or would be hazardous to life, property or the environment and requires respondent to take immediate action to ensure its safe operation," Alan Mayberry, PHMSA's associate administrator for pipeline safety, wrote in the agency's order.

The order states that a weight placed on top of the pipeline to prevent "buoyancy concerns"—floating in areas of standing water during construction—was likely to blame.

"Preliminary information indicates the failure may have been caused by mechanical damage to the pipeline and coating associated with a weight installed on the pipeline in 2008," Mayberry wrote.

How Weights Could Have Damaged the Pipeline

"I'm anxious about the future operation of the pipe and the potential for future leaks," Gary Hanson, vice chairman of the South Dakota Public Utilities Commission, said.

Hanson's main concern is that if damage was caused by a weight in one location, similar damage could have been caused if weights were used elsewhere.

"If there is a standard installation procedure for installing the weights, that may have created challenges in other locations on the pipe," he said.

"Groundwater moves into this area and out of this area. Obviously TransCanada recognizes that because they put weights on the pipe," he said. "It concerns me as to future leaks and the potential for damaging groundwater."

Brian Walsh, scientist manager with the South Dakota Department of Environment and Natural Resources, said there is some shallow groundwater present at the spill site that TransCanada will have to evaluate and mitigate as needed.

PHMSA's order noted that TransCanada had recently sent electronic leak detection equipment through the pipeline, including past the leak point, but hadn't detected any signs of a leak, or potential for a leak, before the spill occurred. Hanson cited that as another concern.

TransCanada officials said they are complying with all terms of the corrective action order to ensure the integrity of the pipeline. "We will continue to ensure we are responsive to direction from both federal and state regulators as we complete our investigation and cleanup efforts," company spokesperson Terry Cunha said.

As part of the order, the company must analyze available data and conduct additional tests within 120 days, looking for signs of potential failures in other areas where weights were used.

TransCanada removed the damaged portion of the pipe and replaced it. The damaged section is being sent to a National Transportation Safety Board lab in Virginia for metallurgical testing. While the precise cause of the pipe failure remains unknown, Carl Weimer of the Pipeline Safety Trust said the weight may have damaged the pipe's outer coating, allowing corrosion to create a failure, or it may have damaged a weld point connecting two lengths of pipe.

Hanson, who is one of three public utilities commissioners for South Dakota, said he will wait to make a final decision on how to proceed until after PHMSA completes its investigation into the cause of the spill.

Federal and state permits for the pipeline were issued by PHMSA and the South Dakota Public Utilities Commission. State regulators have previously said that if TransCanada was found to be at fault for the spill they might revoke the company's permit for the pipeline.

Hanson reasserted the commission's authority to revoke TransCanada's permit but added that such a measure would be more likely to come from PHMSA. "We do have the authority to revoke their permit for operation, however, it is unlikely that we would get to that point," he said.

The 7-year-old Keystone pipeline that was damaged is part of a larger pipeline system owned by TransCanada. The company won a key approval from Nebraska regulators last week to build its long-contested Keystone XL extension, though not on the company's preferred route. That project faces several challenges, including low oil prices, legal challenges and pushback from Native American communities.