“Claims of sacred burial sites and traditional hunting territories have stalled or stopped oil and gas, mining, lumber and other resource projects dead in their tracks.”

Indigenous land claims and the issue of private property

“Canada doesn’t have any land, because it is all ours.” Kahn-Tineta Horn, Mohawk elder, Indigenous advocate from the 1960s.

Since 1982 and the repatriation of Canada’s constitution and the bill of rights, Indigenous advocates have made steady progress in convincing Canadian courts and politicians that Indigenous groups must be consulted and accommodated whenever a development affecting Crown land anywhere near an Indigenous (reserve) is under consideration. The Supreme Court of Canada literally invented the “duty to consult and accommodate” Indigenous groups out of thin air in the Haida Nation case. Since then, the “duty” has been expanded, bit by bit.

Claims of sacred burial sites, traditional hunting territories and the like have stalled or stopped oil and gas, mining, lumber and other resource projects dead in their tracks. In practice, a claim means lengthy negotiations until the Indigenous community’s price has been extracted. When Indigenous communities refuse consent, developments die.

The claims of sacred burial sites and traditional hunting lands can often be vague. The Indigenous peoples of the north and western parts of Canada were semi-nomadic hunters and gatherers. They hunted wherever there was game. As they followed their food supply, burial sites could be almost anywhere. In current settled agricultural societies, cemeteries are known to be in specific locations, and archaeological diggings to confirm are simple matters to undertake. But this is not so with Indigenous tribes.

Virtually anyplace could be a burial site. Accordingly, Indigenous groups could claim burial locations at will, without fear of being contradicted. Attaching the word “sacred” to claims provides at least the appearance of authenticity. Government and corporate entities, wishing to develop resources at specific sites, can be at the mercy of Indigenous groups who can make claims of interest at the same site.

When Chief Matthew Coone Come, politican and Indigenous activist, was asked how much of Canada’s landmass land “belonged” to the Indigenous peoples, he replied, “All of it.” Indigenous advocates’ claims are very extensive, and their recent muscular claims are proof of Indigenous ambition in this regard. They want a veto on all resource development.

Although the Supreme Court has ruled that Indigenous communities do not have a veto on resource development projects, that is not how it has worked out in practice. Indigenous demands to be “consulted and accommodated” have functioned as a veto. Vitally important development projects have been held hostage by Indigenous advocates and their well-paid lawyers. Indigenous legal bills have been paid by the federal government, meaning Indigenous advocates have nothing to lose by litigating whenever and wherever any possible claim shows itself. For some Indigenous communities, this practice—called tollgating—has become a major new industry.

Up until now, claims of sacred burial sites and the like have been confined to claims on Crown land. Not anymore. The Carry the Kettle Nakota First Nation in Saskatchewan has served notice that it will claim the right to be consulted for any “sacred burial sites,” including sites existing on private land as well.

Indigenous advocates became so bold with their “duty to consult” demands, it was only a matter of time before their claims would extend to private land. If the “share the land” campaign of Indigenous advocates was accepted, there would be no reason why private property wouldn’t be “shared” as well—just as Crown land is to be “shared.”

However, some Indigenous advocates are cautious about making claims to private property for fear that landowners will become alarmed and react with pressure on legislators and governments. The fact that Carry the Kettle strategists decided to pursue rights over private property shows just how bold Indigenous advocates have become. They hope that compliant courts and politicians will accept even the most extreme version of Indigenous property rights. That includes the claim that every Indigenous person who can prove that their ancestors lived in a certain geographical area is entitled to be a part owner of all of the lands within that geographical area, whether that land is publicly or privately owned.

The recently decided Restoule law case where 21 Indigenous groups in Northern Ontario won a court case to increase their yearly annuities, is an example of how successful Indigenous advocates have been in this regard. Unless the decision is reversed on appeal (the Province of Ontario is appealing the decision, the federal government has surrendered), “share the land” claims will apply to all publicly and privately-owned land in Canada.

If anyone in 1982 had forecast that this extreme view about “all lands” would become a reality, they likely would have been considered mad. However, now in 2019, the combination of determined Indigenous advocates, an activist Supreme Court, and compliant politicians has resulted in a rising probability that “share the land” will become the law. If so, the prospect of all resource development going forward will only be allowed to proceed if Indigenous communities allow it.

"Although the Supreme Court has ruled that Indigenous communities do not have a veto on resource development projects, that is not the way it has worked out in practice."

The new and increasingly common assertion is that treaties require all Canadians to “share the land.” For Indigenous advocates, the term means that there is no longer any absolute ownership of land in this country. All Crown and privately-owned land would be subject to claims from Indigenous groups on the theory that Indigenous people “were here first.” By this logic, most non-Indigenous Canadians, now thinking they are the lawful owners of fee simple land, would have to pay some form of rent to Indigenous groups forever.

The terms would have to be agreed to by Indigenous groups, who can resort to the courts. The combination of the “duty to consult” and acceptance of the “share the land” concept would mean that status Indigenous people who live on reserves—less than 2 per cent of the Canadian public—would have a virtual stranglehold on resource development in Canada. Indigenous groups could eventually extend their claims to all publicly and privately-owned land—as Coone Come and Kahn-Tineta Horn have said, “All of it.”

The demand by the Carry the Kettle First Nation for sacred rights on private property will be followed up by claims from other Indigenous groups pursuing so-called sacred rights. The current federal government has been amazingly compliant concerning claims of this kind.

In fact, under the leadership of Justice Minister Jody Wilson-Raybould, (who recently resigned for other reasons), practice directions were issued to Department of Justice lawyers that almost concede a case to Indigenous claimants before the trial even begins. Justice lawyers go into court with one arm tied behind their backs. Their role is to pursue “reconciliation” rather than fight on behalf of Canadian taxpayers.

"Most non-Indigenous Canadians, now thinking they are the lawful owners of fee simple land, would have to pay some form of rent to Indigenous groups forever."

Most Canadians do not have a clear understanding of how profoundly Indigenous claims have advanced and expanded since 1982. An activist Supreme Court and compliant politicians have severely compromised resource development in Canada.

Crown land is now effectively “shared” with Indigenous communities. Now, private land is at risk as well. If Kahn-Tineta Horn prevails, what has been private land would be considered “shared lands,” and private no longer.

Brian Giesbrecht is Senior Research Fellow at the Frontier Centre for Public Policy (FCPP.org). He received his education at United College and the University of Manitoba, where he obtained his LLB in 1972. He worked with Walsh, Micay and Co., and was later appointed to the Provincial Court (Family Division) in 1976, where he heard child welfare cases and general family matters until he transferred to the Criminal Division in 1989. He was an Associate Chief Judge from 1991 to 2005, and he became Acting Chief Judge in 1993. Following his retirement from the bench in 2007, Mr. Giesbrecht has written extensively for various publications on the need to abolish the Indian Act and the separate systems of government that exist in Canada. 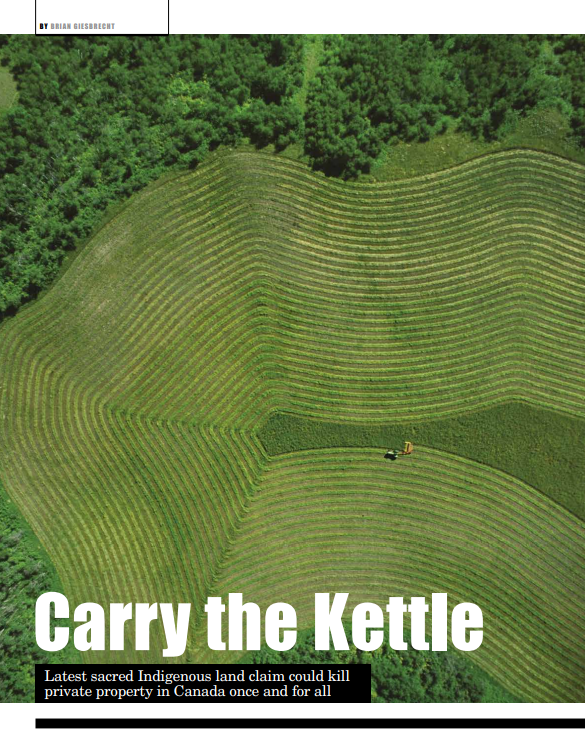 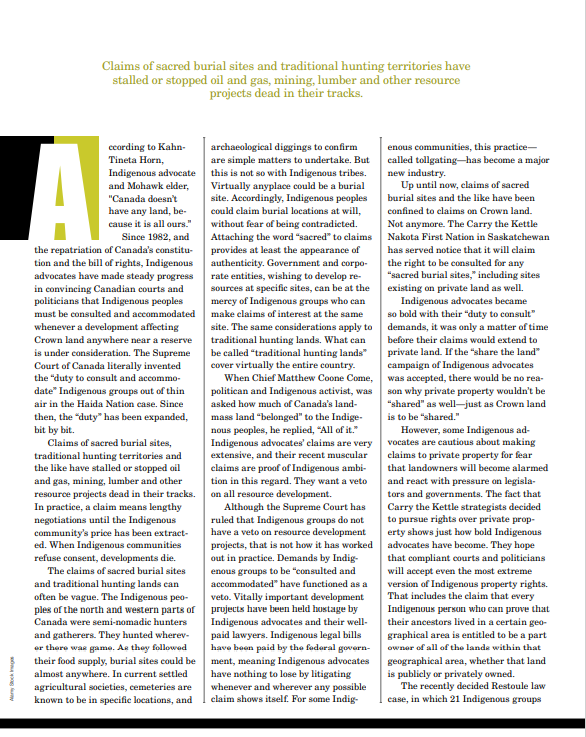 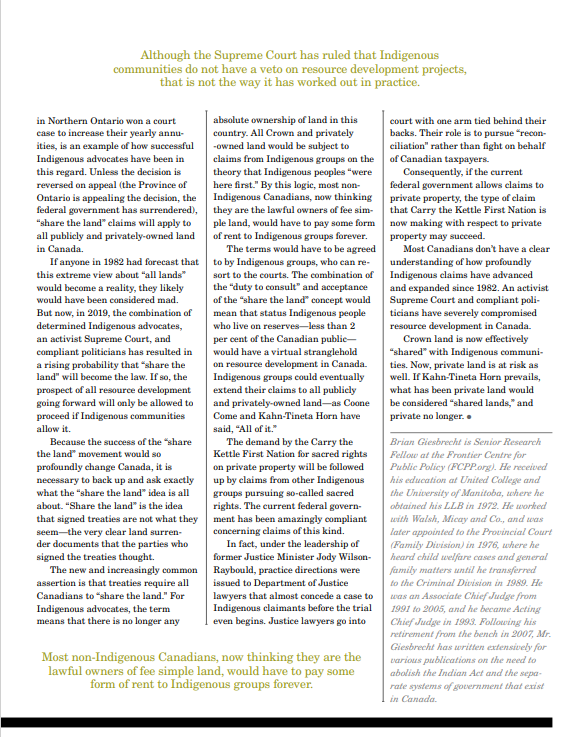