Canadian Oil & Gas Poised for Growth in the Post-Covid Economy

Landowners will benefit from pipelines, but they need to remain vigilant

"Politicians are incompetent and dishonest, and their no-sanction international climate agreements don’t really mean much."

A lot of people see only grim prospects for Western Canada’s petroleum sector.

In 2020, oil prices were hammered by the peculiar combination of the virus panic and the struggle for market share between the Saudis and Russians.

At the same time, bureaucrats and politicians speak of using the economic recovery phase to reconfigure massive swaths of the economy as if the virus panic is coterminous with the alleged climate-change crisis. Oil is a big bogeyman here.

But a lot of people seem to be overlooking basic reality.

Even at the lowest point in 2020, Alberta oil production never fell below the low point of 2017. It’s almost back to where it was at the beginning of the year. Alberta’s total production has nearly doubled since the 2008 financial crisis and it’s going to continue growing. A lot.

As a percentage of total energy consumed, oil consumption will fall in the coming decades, however the total amount of crude consumed will increase.

Last year, the world consumed about 98 million barrels of oil per day. In 15 years, the world will be consuming around 110 million of those barrels unless something apocalyptic happens. Natural gas consumption will also grow.

Total consumption will increase, especially in poorer countries. The increasing supply will come mainly from the U.S., Russia, Brazil and Canada.

Now how will Western Canada participate in meeting that demand?

Major increases in pipeline capacity are forthcoming with the Trans Mountain Expansion and Line 3 Replacement. While Keystone XL has been kiboshed by President Joe Biden, there is still the major Louisiana-to-Illinois Capline reversal, which is underway, and the proposed 2,600-kilometre “A2A” jumbo project (Alaska to Alberta Rail).

At the same time, U.S. oil production will fall significantly next year because so much shale production is uneconomical at prevailing prices.

When Alberta’s export capacity increases, there is going to be a lot of volume to fill. With a lot of hostile signals from government and various high-profile cancellations (including the $20 billion TECK project), it is unlikely that there will be another oilsands megaproject to be proposed, much less completed, in at least the next decade. Oilsands is like tobacco these days — it’s not a “sexy” investment in the world of big finance.

So a lot of this growth will come from expansions to existing oilsands projects. This likely suits the current biggest oilsands producers just fine. But to further support supply increases, there will also be more conventional production because it requires a lot less upfront capital and doesn’t need to be “respectable” to big investors and bankers.

More than 80 per cent of oil production in Alberta comes from oilsands. In the last several years, conventional production declined the most in relative terms. That means it has more to gain proportionally as market conditions improve.

A $5 to $10 per-barrel reduction in transportation costs (pipeline versus rail) changes the scope of opportunity for a lot of conventional investments. It also reduces strain on rail capacity, reducing transport costs for other sectors, including agriculture.

The truly massive Coastal GasLink pipeline is also underway, and it needs huge production to address Asia’s desperate need for cheap energy. But even just in the domestic market, a lot of coal energy must be replaced with natural gas.

The main headwinds facing Canada’s petroleum industry are related to politics, not markets. It is certainly possible for Ottawa to simply destroy Canada’s industries by making them pathetically uncompetitive. Despite the moral grandstanding of various politicians, this is not a foregone conclusion. Politicians are incompetent and dishonest, and their no-sanction international climate agreements don’t really mean much.

So should landowners expect plenty of action in the next decade when it comes to oil and pipeline issues? Seems like it. 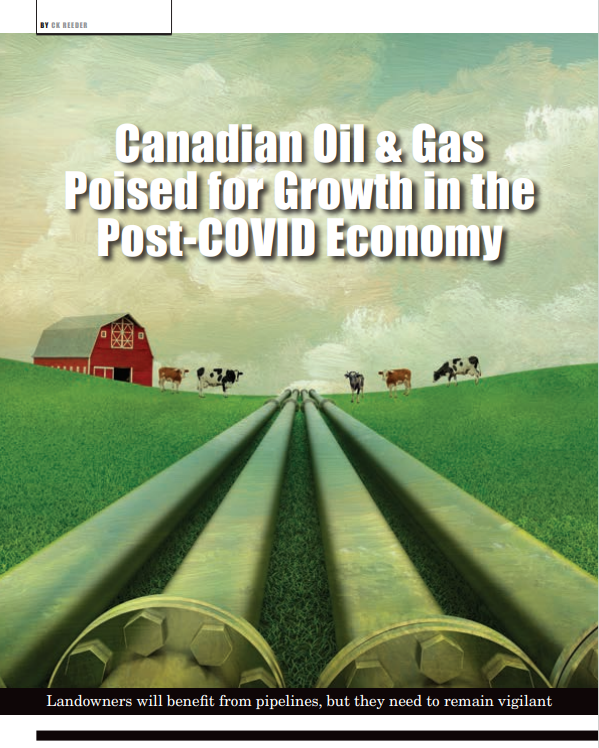 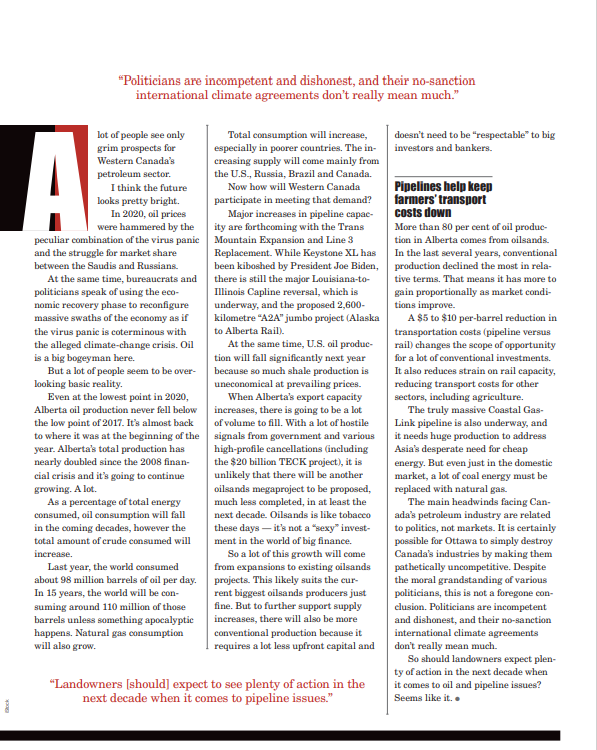