Respect for property rights is good for companies, the economy and the environment.

Earlier this spring, alongside our local landowner committee, CAEPLA negotiated a win-win settlement agreement for a group of landowners from the Peace River area of northern B.C. and Alberta on a pipeline project that is 88 kilometres in length. The project was certainly smaller than the 1,659-kilometre Enbridge Line 3 Replacement Project that CAEPLA negotiated with Enbridge in 2015, but the issues affecting the landowners are largely the same.

Similarly, a few months ago, CAEPLA also negotiated another win-win business agreement with a power company in Alberta on one of its smaller power corridor projects. This was one of a number of successful agreements negotiated with the same company over the past few years.

“With these energy projects, the relationship between the property owner and the company is more than a lifetime commitment.”

They use energy every day in the production of the food that all of us enjoy and depend upon. Their land is their livelihood, and they are stewards of the land, meaning safety and environment are constantly top of mind.

As such, landowners are concerned about the many legitimate issues that affect their property when an energy company proposes a project on their land.

Issues like soil construction methodology and restoration, how deep the pipe is buried, bio security, liabilities and a myriad of other issues that affect the families, businesses and property of these directly affected landowners who live and work on the land 24/7/365.

With such energy projects, the relationship between the property owner and the company is more than a lifetime commitment. To start that interaction by disrespecting the landowner and stealing his/her property does not sow the seeds of a good relationship. From the beginning, there is resentment when a landowner’s property rights are ignored.

As landowners are the company’s “first line of defense,” some companies are realizing that a happy and satisfied landowner makes for a better long-term relationship.

The win-win business agreements that CAEPLA negotiates on behalf of landowners on projects like the ones mentioned above, are just that, a win-win.  The company and the landowner start off their relationship on the right foot. And the contract holds the company and its contractors accountable to ensure the project is done right.

When CAEPLA promotes property rights, it is not only for the benefit of landowners, but for their neighbours, surrounding communities and for industry, too. We believe this is the basis for a prosperous economy and peaceful society.

A win-win business agreement helps remove the stress and anxiety from the landowner, and it gives the public confidence that the project is safe. After all, if a directly affected landowner who is living near the pipe is comfortable that the project is meeting his safety and environmental concerns, a Canadian who is living nowhere near the pipe can have confidence and peace of mind.

CAEPLA looks forward to negotiating more of these win-win agreements that are good for everyone.

Through all the projects CAEPLA is involved with and from the launch of Pipeline Observer last year, we have been receiving an incredible amount of feedback, almost all of it positive.

As a result, we have decided to feature your feedback in these pages going forward. If you would like to comment on any of the stories you read here, or have issues you want to bring to the attention of the pipeline landowner community and the industry at large, feel free to reach out to us at [email protected] or 306.522.5000.

We look forward to hearing from you! 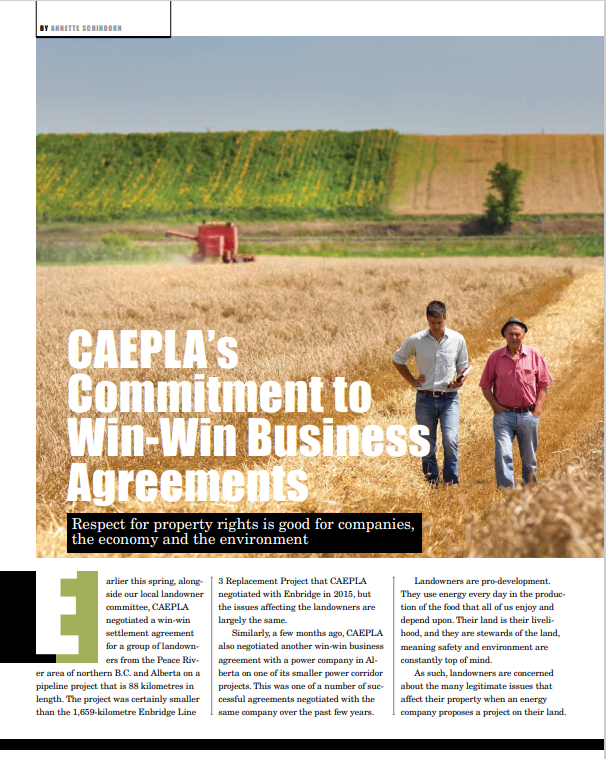 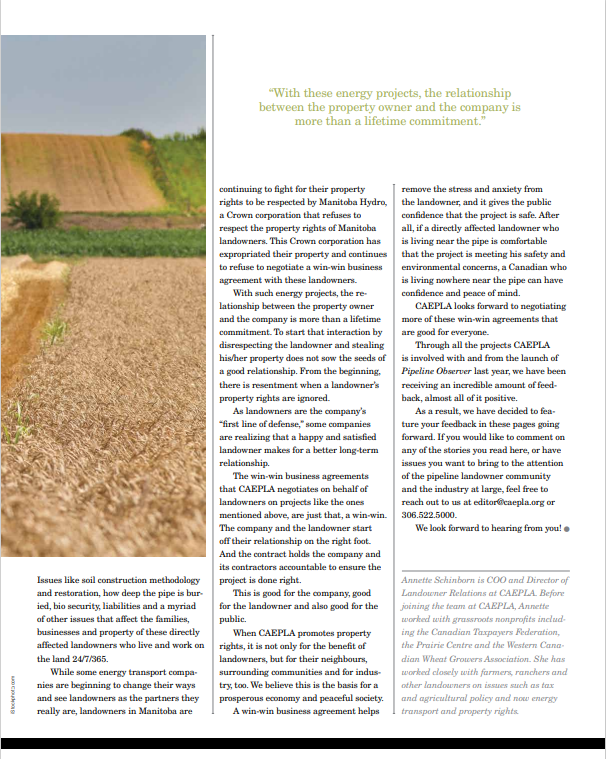 Annette Schinborn is CEO at CAEPLA. Before joining the team at CAEPLA, Annette worked with grassroots nonprofits including the Canadian Taxpayers Federation, the Prairie Centre and the Western Canadian Wheat Growers Association. She has worked closely with farmers, ranchers and other landowners on issues such as tax and agricultural policy and now energy transport and property rights.