CAEPLA, Construction Monitors and You

Line 3 Replacement proves the future of land management is here

Since the spring of 2017, Infocus Management and Consulting has supplied independent third-party monitors every day to the Enbridge Line 3 Replacement Project (L3RP). These monitors verify daily that the 125-page settlement agreement between CAEPLA and Enbridge is being followed.

The agreement is a requirement of the permit Enbridge received from the National Energy Board (NEB) to build this pipeline.

Thus far, with minor exceptions which have been addressed promptly, Enbridge personnel and contractors have been fulfilling the parameters of the agreement. The result is a pipeline construction achieving higher standards for soil handling and biosecurity than previously witnessed on any major linear project of its kind.

To date, L3RP has been audited by NEB inspectors more than 30 times. These inspectors, bearing the scrutiny of a highly engaged public, have returned findings of an extraordinarily clean right-of-way (RoW). No non-compliance reports have been issued, and the few minor imperfections observed have been corrected immediately.

The CAEPLA settlement agreement and its constant verification by independent Infocus monitors is a key contributor to this level of quality.

In recognition that no agreement is flawless, this particular agreement makes provision for a “joint committee” of Enbridge and CAEPLA representatives to meet regularly with an Infocus representative to verify conditions on the RoW.

The committee has been given the authority, and has developed mutual trust among the parties, to amend the agreement when necessary as the project progresses. Construction practices have been modified to address unforeseen concerns, incorporate technological advancements or adopt methods found preferable since the agreement was signed. These improvements have evolved as a direct result of the observations made by the independent monitoring team.

One such example of improvement occurred when Infocus monitors reported that pre-construction measurements for soil compaction provided an unreliable baseline, due to unavoidable deficiencies and inconsistencies in data collection methods. Enbridge and CAEPLA joint committee members conferred. They decided to scrap this costly and unhelpful requirement in favour of a commitment to employ proven, quality methods for ditch backfilling and de-compaction of subsoils bearing construction traffic. This solution benefitted both parties and furthered the development of trust between them.

"Landowners who have observed these high standards of conduct walk away with new awareness that their own everyday practices can be upgraded to protect their lands and those of their neighbours."

Observations of L3RP construction by Infocus third-party monitors have revealed a number of lessons.

Monitors attest that a stringent protocol for soil handling (stripping, separation, preservation and restoring after pipeline construction) and biosecurity (mandatory cleaning stations, methods, and record-keeping for all equipment and personnel) can be practical and cost-effective. A little extra time and attention to these details prevents much more costly damage to lands and to loss of public trust and reputation.

Monitors who, along with company environmental and craft inspection teams, catch construction deficiencies before they degrade into chronic problems, save the project time, resources and prestige.

For instance, when monitors notice inadequate stripping of topsoil, contractors immediately remedy methods before equipment and personnel have left the area. This saves the expense of time and further damage when crews make corrections immediately. Work quickly brought back into compliance with high standards builds trust among landowners, regulators and the broader community.

Monitors are cataloguing lessons learned from L3RP and its settlement agreement. Their observations are helping the parties develop standards for soil and weather conditions that are more precise and less subject to interpretation or conflict. Yet Infocus monitors caution against the foolhardiness of prescribing certain standards or methods for all locations when soil and weather conditions vary greatly along a span of 1,000 kilometres. For example, the use of a certain piece of equipment for conditioning topsoil during reclamation may be ideal in one location and disastrous in another.

Monitors empathize with landowners’ desires to limit the amount of land allotted to permanent pipeline RoW and temporary work space. Yet, they observe first-hand, every day, the negative impact on safety to workers and preservation of topsoil when too little workspace is allotted for proper storage of soils.

Monitors have observed how L3RP crews with long-standing work habits can learn to be more careful when handling soils or washing and bleaching equipment. Landowners who have observed these high standards of conduct walk away with new awareness that their own everyday practices can be upgraded to protect their lands and those of their neighbours.

Infocus employs monitors with training and experience in pipeline craft inspection, agriculture, landowner relations, environmental inspection and industry regulation. All of these disciplines can be helpful, yet no one type of training guarantees that a monitor will display the required powers of alertness, the necessary diplomacy, and the strength of character to stand alone between the parties to this agreement for the benefit of both parties, the land and the greater public good.

Due to the nature of heavy construction and the ever-present possibility of human error, no pipeline project will ever be conducted without some risk of soil admixing, contamination or the spread of weeds. But the record of L3RP to date demonstrates that these risks can be reduced and managed when parties of mutual goodwill and respect agree to treat each other responsibly. Mutual trust is further advanced when a trusted independent third party observes and substantiates compliance.

In summary, Infocus monitors are playing a key role in serving not only CAEPLA members, but all impacted landowners, responsible pipeline companies (like Enbridge), government regulators and the public at large. Their meticulous, independent confirmation of proper safety, biosecurity and soil handling practices build confidence among all stakeholders that pipelines can be built safely and with respect toward all lands.

To learn more regarding independent monitoring, or to inquire as to how you can become a partner in advancing responsible pipelining, contact CAEPLA or Infocus Land Management. 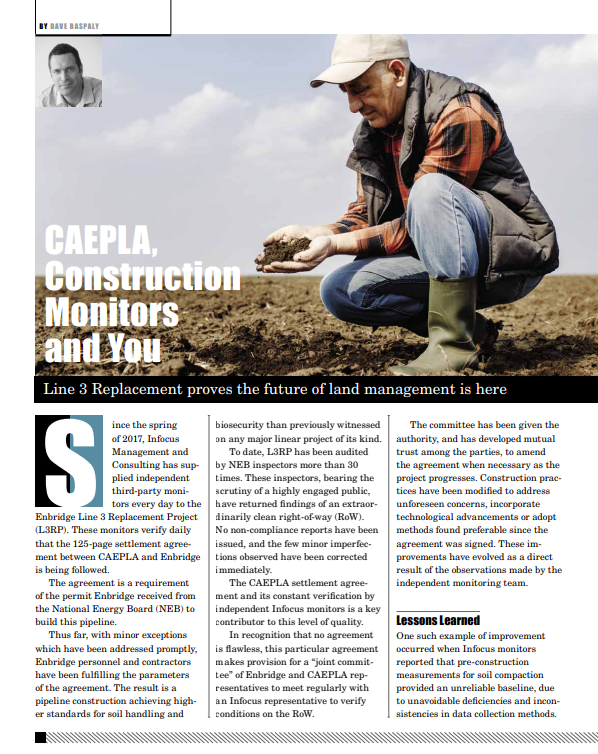 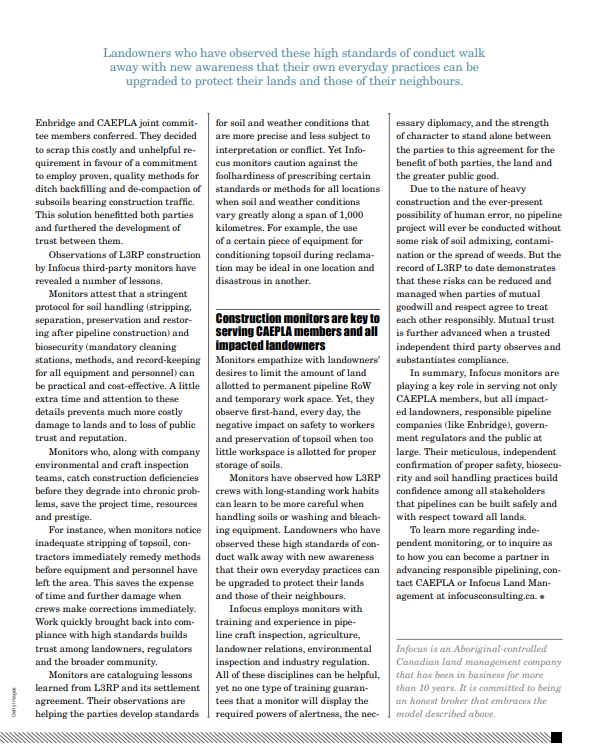 Infocus is an Aboriginal-controlled Canadian land management company that has been in business for more than 10 years. It is committed to being an honest broker that embraces the model described above.