Damage-prevention process is a key to safety

"There’s a lot more to effective damage prevention than simply ‘Call or Click Before You Dig.’"
— NATHALIE MOREAU

OVER THE PAST 18 months, the Canadian Common Ground Alliance (CCGA) has expanded its board of directors to realize its goal of becoming the voice of damage prevention in Canada. But there was still one key element missing — the alliance needed to engage landowners.

Generally, landowners and homeowners aren’t frequent diggers, digging only once every five to 10 years, but considering roughly 30 per cent of all locate requests across Canada originate from landowners during the annual digging season, the volume of landowners carrying out ground disturbances is quite large.

“Initiating the damage-prevention process prior to every ground disturbance is the key to safety,” says Nathalie Moreau, vice-chair of the CCGA and director-general of Info-Excavation, Quebec’s One-Call centre. “But there’s a lot more to effective damage prevention than simply ‘Call or Click Before You Dig.’”

The Canadian Association of Energy Pipeline Landowner Associations, or CAEPLA, advocates on behalf of landowners, with its main focus on transmission pipelines. The association’s membership and alignment with core public safety values made it natural for the CCGA to reach out to it.

“Landowners are important,” says Dr. Dave Baspaly, executive director of the B.C. Common Ground Alliance and chair of the CCGA.

“CAEPLA’s reach continues to grow. The landowner stakeholder group is firmly within CAEPLA’s wheelhouse, and in order to achieve our collective goals of damage prevention and public safety, we needed to align. It was really that simple.”

Moreau says the relationship is very similar to that with the Canadian One-Call Centres Committee.

“The CCGA routinely makes decisions that it believes are in the best interest of the Canadian One-Call Centres, but until that stakeholder group was meaningfully engaged and represented on the board of directors, we were only guessing,” she says.

CAEPLA leaders recently met with CCGA leadership and are quickly learning the scope of work that lies ahead with the CCGA. The proposed federal damage-prevention legislation, the National Best Practices, the Damage Information Reporting Tool and Societal Costs initiative require resources and engagement to be completed.

“Time is always difficult to manage,” Baspaly says. “But the CCGA has made some enormous strides on a shoestring budget and the board fully expects that trend to continue.

Our ability to travel light, engage and challenge stakeholders and complete tasks is our greatest asset.” 

— Mike Sullivan is the president of Alberta One-Call Corp. and executive director of the Canadian Common Ground Alliance. 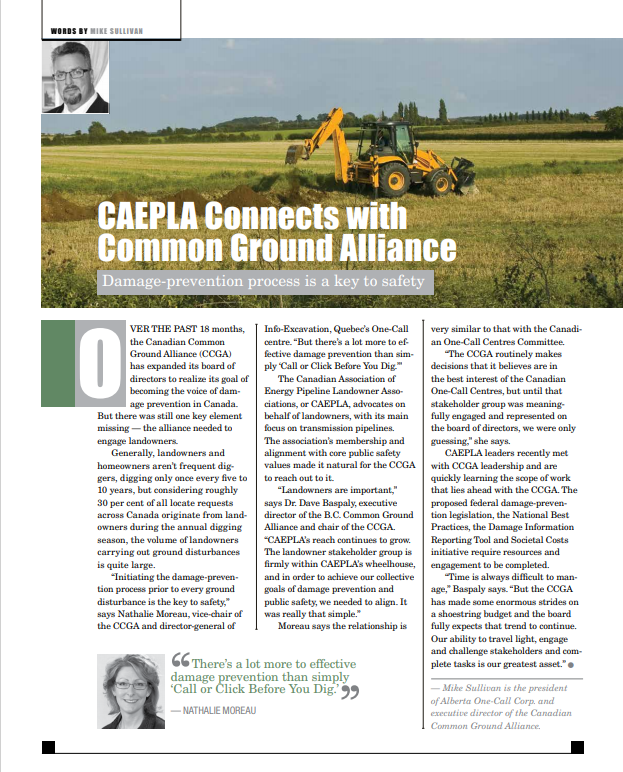