“Manitoba Hydro needs to recognize and show respect for our property rights.”

A big part of the decisive sweep to power by Brian Pallister’s Progressive Conservative Party of Manitoba in the April election were the spiralling costs and controversy surrounding Manitoba Hydro’s Bipole lll transmission line.

Former NDP Premier Greg Selinger ensured his eager-to-please appointees on the board ordered a longer route around the west side of the province which alone added $900 million to the megaproject and put some of Manitoba’s most prosperous farmland in Bipole’s path.

Under cover of a pricey report from Boston-based consultants (reportedly costing taxpayers nearly $4 million), the Pallister government has concluded the project will proceed as planned.

Dozens of farm families who had held out and been expropriated, and who had kept faith in Pallister PC promises to repeal the Bipole boondoggle are quickly discovering it’s business as usual under the Tory controlled Manitoba Hydro.

Following a series of discouraging letters sent to landowners by Hydro prior to the newly appointed Manitoba Hydro board’s public relations push at a series of open houses across the province in October, Pipeline Observer sat down with Jurgen Kohler, chair of the Manitoba Bipole Landowners Committee (MBLC), a local CAEPLA affiliate.

We asked Mr. Kohler about the letters, and if anything had changed in the treatment of his members by Hydro under the new Pallister-appointed board.

PO:  Recently, Glenn Penner (Manitoba Hydro division manager transmission construction and line maintenance) sent a letter with a two-page colour brochure to landowners impacted by construction. Has MBLC verified that their biosecurity procedures and dismissive attitude towards landowners has changed?

JK: On October 14, 2016 we sent a letter to the new chair of the Hydro board outlining and emphasizing that very point. We are awaiting his response, which will tell us whether their dismissive attitude has changed.

PO: The CEO of Hydro, Kelvin Shepherd, also wrote to landowners and referred to instituting “a variety of additional measures to ensure compliance with required construction and bio-security measures.” Have you received any explanation of what these measures are and why these protections to farmland were not in use under the NDP?

JK: No we have not yet received any explanations on what the measures are. Bottom line is that those procedures need to be negotiated with the real stakeholders—the affected landowners. That has not happened. It needs to happen before construction resumes. Our negotiator, CAEPLA, is ready to start this process.

PO: A letter from Hydro board chair Sandy Riley to MBLC referenced how “80 per cent of landowners have already committed to voluntary easement agreements” despite the fact many of those were for low-value or unproductive farmland, which is a far different case than the remaining dissidents. MLBC recognized many of the agreements were hardly voluntary, signed in fear of an expropriation process that had an “enormous impact” on the mental and physical health of farm families. What do you feel can be done by Hydro to restore a sense of justice to the people who were treated with disdain?

JK: Manitoba Hydro needs to recognize and show respect for our property rights. They can do this by recognizing our fundamental right to associate with CAEPLA. CAEPLA is our legally authorized representative, and Hydro needs to come to the table and negotiate in good faith a business agreement that addresses all of our many legitimate issues and concerns with this project.

PO: In light of the Boston Consulting Group, do you have an estimate of the preliminary costs for CAEPLA to represent your members in negotiations?

JK: CAEPLA has suggested Hydro cover a legal budget of $70,000 to show that they intend to be serious in negotiating a "win-win" business agreement. Spending $70,000 with the return of saving at least $4 Million in Land Value Appraisal Commission admin costs seems like a no-brainer to me. Mr. Riley should be very interested given Mr. Pallister's most recent comment that Hydro needs to look for efficiencies first and not hint at a bailout package from the province,

PO: What kind of reception do your causes receive now that policy is in the hands of the Progressive Conservatives? Has there been any signal that Premier Pallister and his new government will uphold landowners' property rights and freedom of association and to collectively bargain with their chosen legal representative, CAEPLA?

JK: The Pallister government has yet to show leadership on this file. They supported us while in Opposition and during their election campaign. But now they are silent. They need to step up to the plate and show that they are serious about property rights and our right to choose CAEPLA as our negotiator. They need to walk the talk by issuing a directive to Hydro to negotiate with us in good faith. 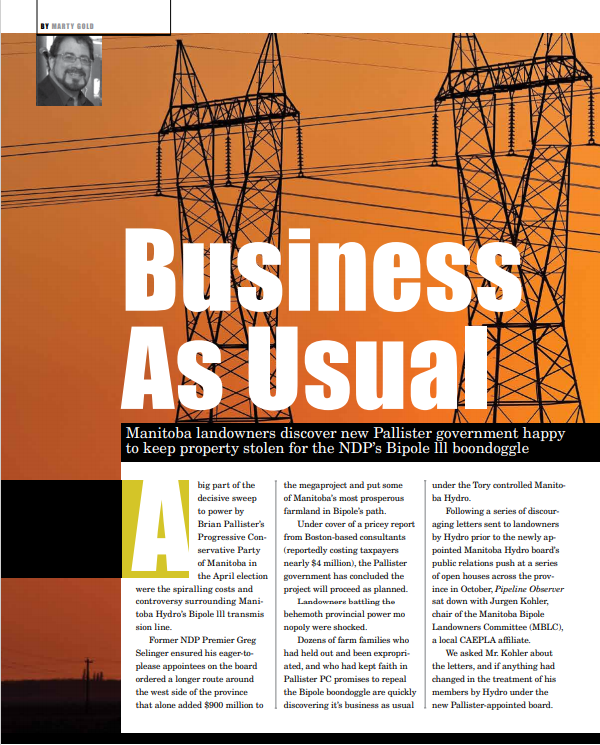 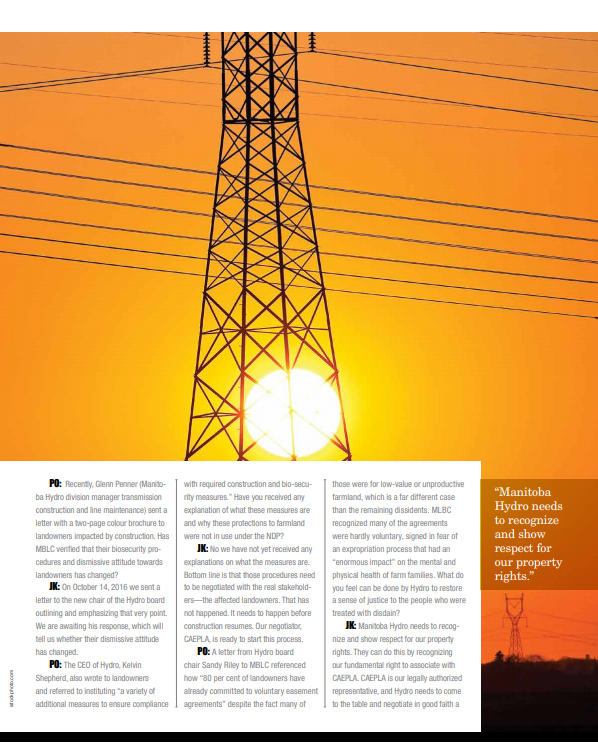 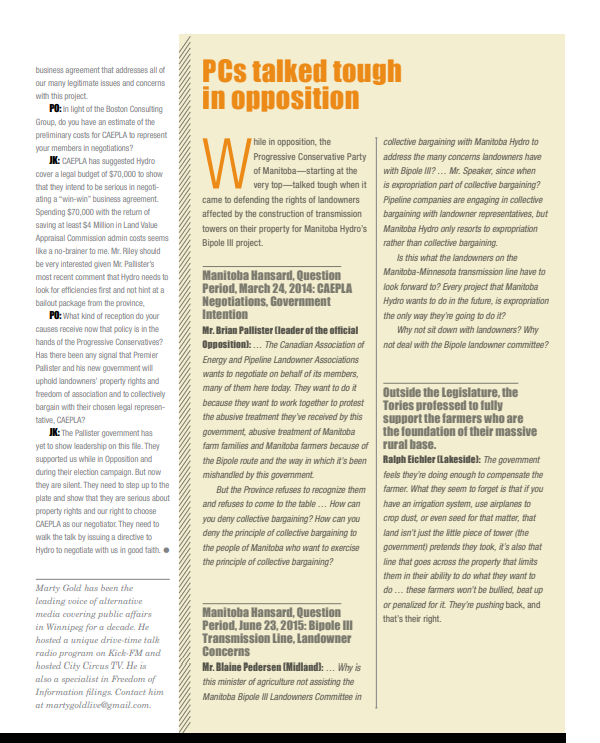