CEPA’s collaborative role in the creation of Bill C-46

For Canadian Energy Pipeline Association (CEPA), it’s a story that began four years ago with a phone call from Natural Resources Canada (NRCan), as the government prepared to update the country’s pipeline safety legislation. Looking to actively engage industry on their plans, they ask CEPA to play a key role in discussions.

The process would ultimately lead to the Pipeline Safety Act (known as Bill C-46).

“It’s easier for government to work through industry associations to bring together industry players in an efficient manner. In this case, CEPA would serve a critical role in brokering the information flow between industry and government in the development of the legislation,” says Robert Tarvydas, director, regulatory facilities for Canadian gas pipelines at TransCanada Corporation and chair of CEPA’s regulatory policy work group.

“At CEPA, it was our job to ensure that industry views were at the table and that we spoke as a collective industry voice,” says Kai Horsfield, CEPA’s research coordinator.

Horsfield estimates that, overall, more than 100 industry experts took part in the talks as the legislation took shape, before being tabled in Parliament in late 2014 by the federal government. Last June, Bill C-46 was given royal assent, which by all accounts could be described as a landmark piece of legislation. It builds on the industry’s already robust pipeline safety system and reinforces the polluter-pay principle—where polluters are held financially responsible for all costs and damages they incur.

As president and CEO of CEPA, I believe Bill C-46 is an important and positive step to instill further public confidence in the transmission pipeline industry. The Bill complements our longstanding commitment to the polluter-pay principle, pipeline safety, excellence in emergency response and environmental protection.

In addition to Bill C-46, CEPA and its member companies are committed to a goal of zero incidents and engaging openly and proactively with stakeholders. The CEPA Integrity First® program supports these goals by bringing together subject matter experts from CEPA member companies to define and implement leading practices that go beyond regulation and drive continuous improvement.

CEPA and its member companies hold ourselves accountable through Integrity First. This program is not a response to current regulatory expectations but a formal approach to the future of our industry.

Another important aspect of the program is the External Advisory Panel, which is comprised of credible and respected individuals representing particular areas of interest such as academia, Aboriginal communities and environmental groups. The Panel ensures CEPA and its members stay focused on meeting and exceeding the expectations of the Canadian public.

Today CEPA and NRCan continue to communicate regularly as the government develops supporting regulations to cover damage prevention and financial liability. While details of the regulations are still evolving, industry observers say the process has been instructive about how to go about creating policy.

“Government policy-makers have come to the process with an open mind and really listened to industry’s views. At the same time, CEPA members came with good faith both to achieve the government’s desired policy outcomes and to make it workable for industry. In many ways, it’s been a model process,” Tarvydas says.

What does this mean to landowners?

Chris Bloomer has more than 30 years of experience in senior executive roles across a range of domestic and international energy businesses including Shell Canada, Castle Energy, Talon Resources, Petrobank Energy & Resources and Connacher Oil and Gas. Throughout his career, pipelines have been an integral aspect of all his business activities, both with regard to existing pipelines and those to access new markets. He has a degree in Geoscience and is a member of The Association of Professional Engineers and Geoscientists of Alberta (APEGA). 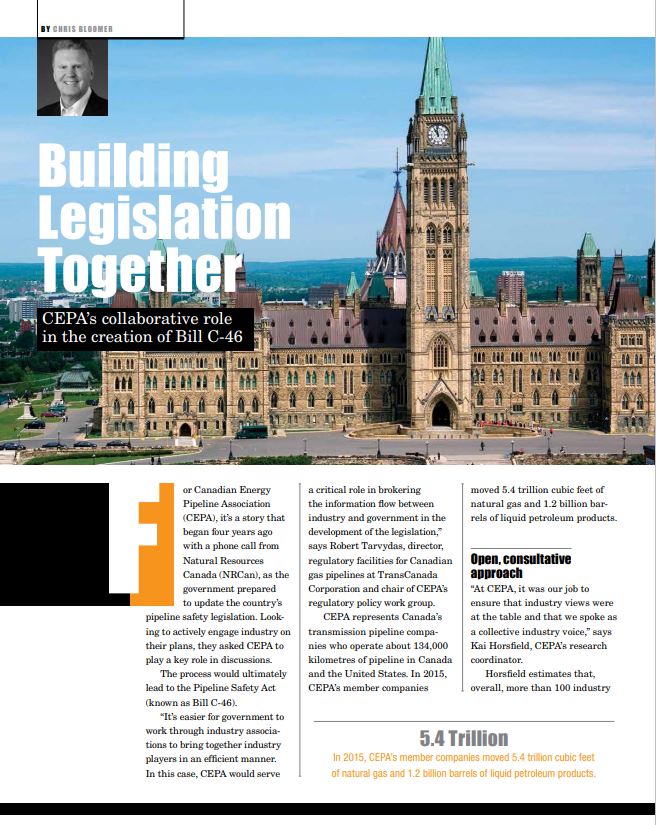 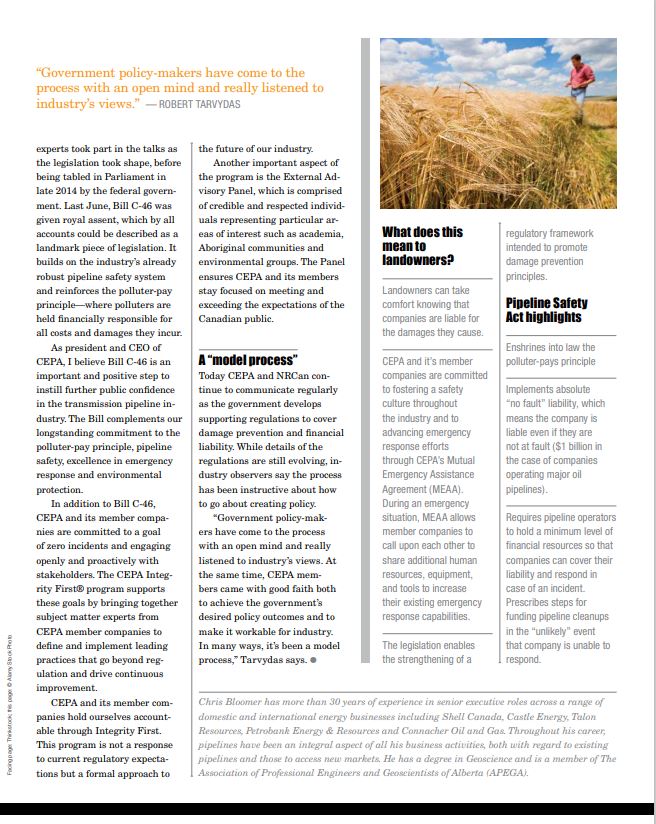